Another post with a few thoughts on two more books I've been reading at the same time. Like the last two, these couldn't be more different!

I bought Grace Williams at Waterstone's bookshop on a special offer for customers who use the Orange mobile phone network. It is an account of a life inside the Briar Mental Institute, from the point of Grace, a mentally and physically disabled girl. We follow Grace through her life from before her arrival at the institute aged eleven in 1957, through to the 1980s when she is living with carers in a smaller house. Although Grace has difficulties communicating with others, leading to dismissive attitudes from outsiders and even staff, she is observant and thoughtful, and the novel focuses particularly upon her friendship and romance with Daniel. Narrated in a sometimes stream-of-consciousness style by a girl limited by her lack of speech, Grace Williams can be a little claustrophobic and jarring in the contrast between how we see Grace - from within her own head - and how others see her, as a hopeless simpleton. Grace Williams Says It Loud is a challenging and sometimes disturbing but compassionate novel from a new author. 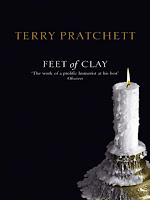 My favourite Discworld books are by far the "Watch" sub-series. We first meet Ankh Morpork's City Watch in Guards! Guards! which takes place at a turning point in the Watch's history. At the beginning of the novel there are only three people foolish enough to police Ankh Morpork: drunken Captain Samuel Vimes, solid and thick - in every definition of the word - Sergeant Fred Colon and Corporal "Nobby" Nobbs - who was "disqualified from the human race for shoving" and needs a certificate to prove that he is (probably) human. The three remaining watchman have a settled lifestyle of plodding the streets, ringing a bell and saying "All's Well!" and looking away when, in fact, all isn't well. Enter new recruit Carrot Ironfoundersson, two metres tall, who when he was sixteen had to be informed by his father, a dwarf, that he was in fact adopted. Carrot knows the rulebooks inside out and, to Vimes' dismay, thinks that the watchmen should actually be fighting crime. Carrot's arrival is the catalyst for a complete overhaul of the City Watch into a force to be reckoned with. The second book in the sub-series, Men At Arms, introduces new recruits of nearly every species (but no vampires) into the force, and by Feet of Clay it has become a vital cog in Patrician and Tyrant Lord Vetinari's well-oiled machine that is Ankh Morpork.

In brief, Feet of Clay is - to use Friends terminology - the one with the golems, the one in which Lord Vetinari is poisoned and the one that introduces Cheery Littlebottom, the first dwarf to "come out" as female. (Of course there are female dwarves, a necessary evil for the continuation of the species, but it wasn't something dwarves really talked about, except for a few delicate conversations when courting.) Feet of Clay raises questions of personhood and slavery: are golems - clay-baked workers - machines or people? If machines, they have no moral responsibilities and cannot be arrested for committing crimes, any more than a sword can be arrested. If people - then their owners/employers have some serious thinking to do! The book is full of scathing comments on social hierarchies and comparisons of human "breeding" with farming. Full of Pratchett's trademark biting satire and groan-worthy "punes, or plays on words," there is also a brilliant whodunnit, howdunnit mystery with some wicked red herrings. In my opinion, Feet of Clay is one of Pratchett's finest stories.
Posted by Katie Edwards at 21:36