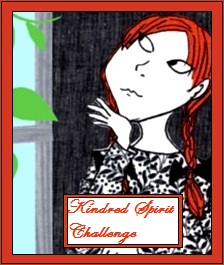 The fourth book in the Anne series is a bit of an oddity, sandwiched in between the Avonlea stories and the Blythe Family stories, covering the three years between Anne's graduation and her marriage to Gilbert Blythe. She takes a job as the principal of Sunnyside High School, but finds an obstacle in the form of the vast Pringle family and friends-and-relations. It seems that the clannish Pringles resent Anne for taking the position of principal, which the Pringles had expected to be offered to one of their own. 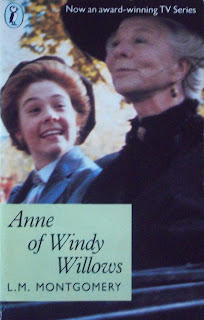 Like the "Patty's Place" scenes of Anne of the Island, a lot of the pleasure comes from the cosy domesticity of Anne's everyday life. In Sunnyside, she boards with two elderly widows, the austere "Aunt" Kate and timid, over-sensitive "Aunt" Chatty (Charlotte.) The workings of the household are seemingly dictated by housekeeper Rebecca Dew - a veritable Mary Quite Contrary, who is allowed to believe she is in charge by the widows, Anne and possibly even Dusty Miller, the cat, who manage Rebecca Dew by suggesting the opposite to their desired end result. Anne has an adorable little bedroom with a tower and a memorable blue cushion with an uncanny resemblance to a doughnut. Windy Willows (or Poplars, if you prefer) is as homey a house as you can hope to find.
In my opinion, Anne of Windy Willows is one of the weaker books in the series. It was written after some of the chronologically later books, and I think it shows that the author's enthusiasm was waning at the time. It suffers a little for being set in a place and with people we don't have much chance to get to know. Not too much can happen in Windy Willows because it might impact the plot of the later-set but earlier-written Anne's House of Dreams. As such, there is a lot of padding, a lot of "hello-goodbye" characters who have never been mentioned before their moment in the limelight, are never heard from again, and have little to no relevance to the main plot. I've said before that I love the Anne series for its episodic nature, but the hello-goodbye characters don't get enough development for me to care very much. Mainly they are either pessimistic, cantankerous old women who look for the worst possible outcome in every event, from weddings to weeding, or they have endless gossip of friends-and-relations we've never heard of, or they are half of a young couple waiting for Anne to help - sometimes with some hindrance along the way - to find their way to the altar. After a few such incidents, they all start to blur together.
But Anne is still the same imaginative, big-hearted girl, a little older, perhaps a little wiser. Her greatest strength is her empathy with lonely people. In Windy Willows, Anne reaches out to hostile, dowdy teacher Katherine Brooke, and to little Elizabeth Grayson, a small girl living next door to Windy Willows (or Poplars) who lives waiting for "Tomorrow" when her father will come back and take her to live with him. Anne knows what it is to be unwanted - until her adoption by Matthew and Marilla Cuthbert she lived a very unhappy existance, seen as a burden by those who viewed it as their duty to bring her up. Instead of letting herself be embittered by the hardships, Anne's imagination helped her to rise above them, even as a child, but as an adult, those early experiences lend her the kind of compassion that imagination alone can't supply.