"They tried to make me go to rehab; I said no, no, no." Amy Winehouse 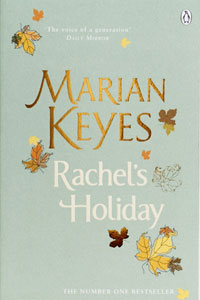 Rachel's Holiday comes as a result of a mistake. Sure, Rachel Walsh takes drugs socially, but everyone does it in her circle of sophisticated friends in New York, it doesn't mean she's an addict. And yes, she understands that it looks like she attempted suicide when she had to be taken into hospital to get her stomach pumped, but really she was just buzzing and couldn't get to sleep so she just kept on taking sleeping pills to help, but not before jotting down a few ideas for poems which, okay, if you look at the notes out of context could possibly be construed as a "goodbye, cruel world" sort of message if you squint enough, but really, it's all just a huge misunderstanding and she's sure that it can all be sorted out.


But her parents send her goody-too-shoes sister Margaret over to bring her home to Ireland and check her into the Cloisters, a rehabilitation centre. Oh, well, Rachel needed a holiday anyway. She could do with a bit of aromatherapy and saunas and general pampering while everyone else got their heads sorted out. But when she gets to the Cloisters, it's not the swanky health spa she expected. Not only does she have to share a room - if you can call it that and not a broom cupboard - with an over-talkative older lady, but there are no saunas, no swimming pools, Rachel is expected to help with the housework and spend her days in group therapy having her childhood poked and picked at by an aggressive nun named Josephine. And no drugs at all. Not even for the people like Rachel who don't have any actual problems with them.

I was given Rachel's Holiday at a World Book Night, by a young lady who had "expected it to be a bit chicky, but it wasn't." It is an easy read, written in short chapters and compelling enough to ensure that I zipped through the 600+ pages in a day and a night, but it is not fluff. I realise that my understanding of "chick lit" is still a rather derogatory one of shoes, sex and shopping, no doubt influenced by Sophie Kinsella's Shopaholic series. Marian Keyes' Rachel's Holiday is easy to read, women's fiction but it is not fluff. There is a good mix of humour and pathos as we get to understand Rachel and the other people in the Cloisters, all going through very different situations and yet facing the same personal problems and daily temptations.


You can tell from the start that Rachel is an unreliable narrator - she doth protest too much. At first she downplays her actions, failing to mention the full extent of her drugs habit and the means she must go to in order to keep it up. We begin to learn the truth through other people's reactions, for example, Rachel describes herself as a big girl, but when she arrives back in Ireland, people remark how skinny she is - a comment that goes over Rachel's head but not the reader's. Despite her deep denial, constant shirking of all responsibility for herself or others and self-absorption, I really liked Rachel. Whether I would have liked her if the story had been told through another person's eyes, or by a third person narrator, is another matter. I suspect not. But as it was, I felt for her when it finally hits home to her how far she's fallen. As she makes the effort to get her life back on track, not always succeeding but trying again, I really feel for her and want her to succeed and make a good life for herself. An enjoyable, lightish read with plenty of substance and a decided lack of shoe shopping.
Posted by Katie Edwards at 18:00