but maybe some day.
This post was inspired by the lovely Nomes at Inkcrush who asked:

how many books [do] you own but have not read?

Now, I am notorious for buying books faster than I can read them, and I thought that now would be a great opportunity to look all through my bookshelves and compile the definitive to-read list: the books which I intend to read, maybe not this month or even necessarily this year, but one day. No doubt I've got books on my shelves I don't even remember buying. So here goes:
From Grandma: 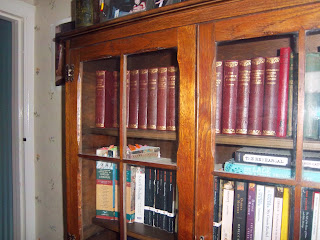 When my Grandma moved out of her house into a smaller flat a couple of years ago, she gave me her bookcase, the very first piece of furniture she bought herself! And with the case came a lot of books, mostly classics in nice old hardback editions.
*The complete Dickens. I've been working my way through the better-known titles, but there are still a lot more to go.
A Child's History of England
Sketches by Boz
Our Mutual friend
Martin Chuzzlewit
Dombey and Son
Barnaby Rudge
The Uncommercial Traveller
The Pickwick Papers
Christmas Stories
Pictures from Italy
American Notes
Master Humphrey's Clock
Miscellaneous Papers
(I'm pretty sure that much Dickens isn't designed to be read in the long term, but maybe across a decade or two...)
Also:
Adam Bede - George Eliot
The Mill on the Floss - George Eliot
John Halifax, Gentleman - Mrs Craik
Vanity Fair - W.M. Thackeray 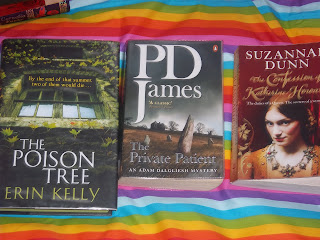 The Confession of Katherine Howard - Suzannah Dunn (from a friend)
The Poison Tree - Erin Kelly (from library)
The Private Patient - P. D. James (from library) 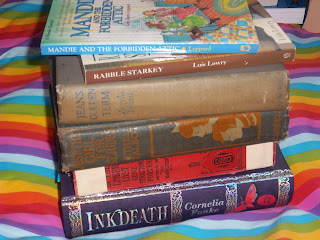 Mandie and the Forbidden Attic - Lois Gladys Leppard. (A charity shop find.)
Rabble Starkey - Lois Lowry. (I'm sure I read this when I was a kid, and recently rediscovered the Anastasia books by this author. Bought from a charity shop at least a year ago)Gene Stratton Porter. (My Grandma once lent this to me to read when I was bored at her house when I was maybe 11. I didn't get very far but enjoyed what I did read, and took it off her hands with the bookcase. I must read this, if only to find out what a "limberlost" is.)
Jean's Golden Term - Angela Brazil and Just The Girl for St Jude's - Ethel Talbot. (Two old-style girls' school stories, found in charity shops or second-hand bookshops.)
A Girl of the Limberlost -
Inkdeath - Cornelia Funke. (I read the first two a while ago, but never was quite in the mood for this one. Bought half-price when it came out in 2008)
Fantasy: 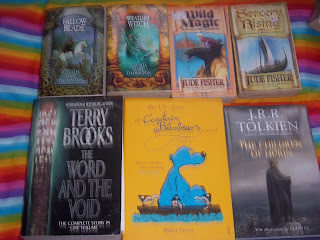 Weatherwitch and Fallowblade by Cecelia Dart-Thornton, books 3 and 4 of the Crowthistle Chronicles.
Sorcery Rising and Wild Magic by Jude Fisher, books 1 and 2 of the Fools' Gold trilogy
The Word and the Void trilogy by Terry Brooks. (I think I've had that since my first or second year at uni - around 2005-2006!)
The 13 1/2 Lives of Captain Bluebear by Walter Moers. (This was donated to a charity shop I used to volunteer at, but it couldn't be put on sale because someone had written in the front. It was too good quality to throw away, never read.)
The Children of Hurin by J. R. R. Tolkien. (Full-length version of the most interesting story from the Silmarillion, my cousin had two copies and gave me one. I've had it 4 years.)
General/literary fiction:
This is the long one! 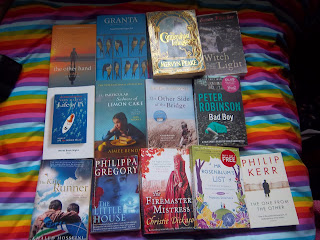 The Other Hand - Chris Cleave. (Bought on a 3-for-2 offer after I met Mr Cleave at a writers' conference. My old supervisor George kept telling me to read it. I really should.)
Granta New Fiction Special. (Not so new now. Given away at the same writers' conference in September 2009.)
The Gormanghast Trilogy - Mervyn Peake (Another charity shop find from my early uni days.)
Witch Light - Susan Fletcher.
The Life of Pi - Yann Martel. (Given away at the World Book Night evening in March this year.)
The Particular Sadness of Lemon Cake - Aimee Bender.
The Other Side of the Bridge - Mary Lawson.
Bad Boy - Peter Robinson
The Kite Runner - Khaled Hosseini.
The Little House - Philippa Gregory. (another charity shop! Bought when I was still in uni, so I've had it at least 4 years.)
The Firemaster's Mistress - Chrissie Dickason (bought new 2006)
Mr Rosenblum's List - Natasha Solomons. (Bought BOGOF this year with the Richard and Judy book club.)
The One from the Other - Philip Kerr (free with a magazine, either this year or the end of last.)
Non-fiction: 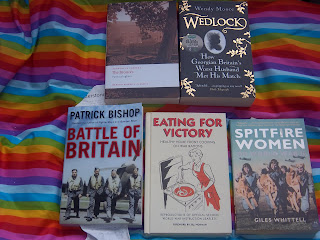 The Brontes - Patricia Ingham
Wedlock - Wendy Moore
Battle of Britain - Patrick Bishop
Eating For Victory
Spitfire Women of World War II - Giles Whittell
Total unread books in my possession: 51. Watch this space for reviews - but not all of them, and not right away! Have you any recommendations for where to start? What is your to-read pile like?
Posted by Katie Edwards at 18:00