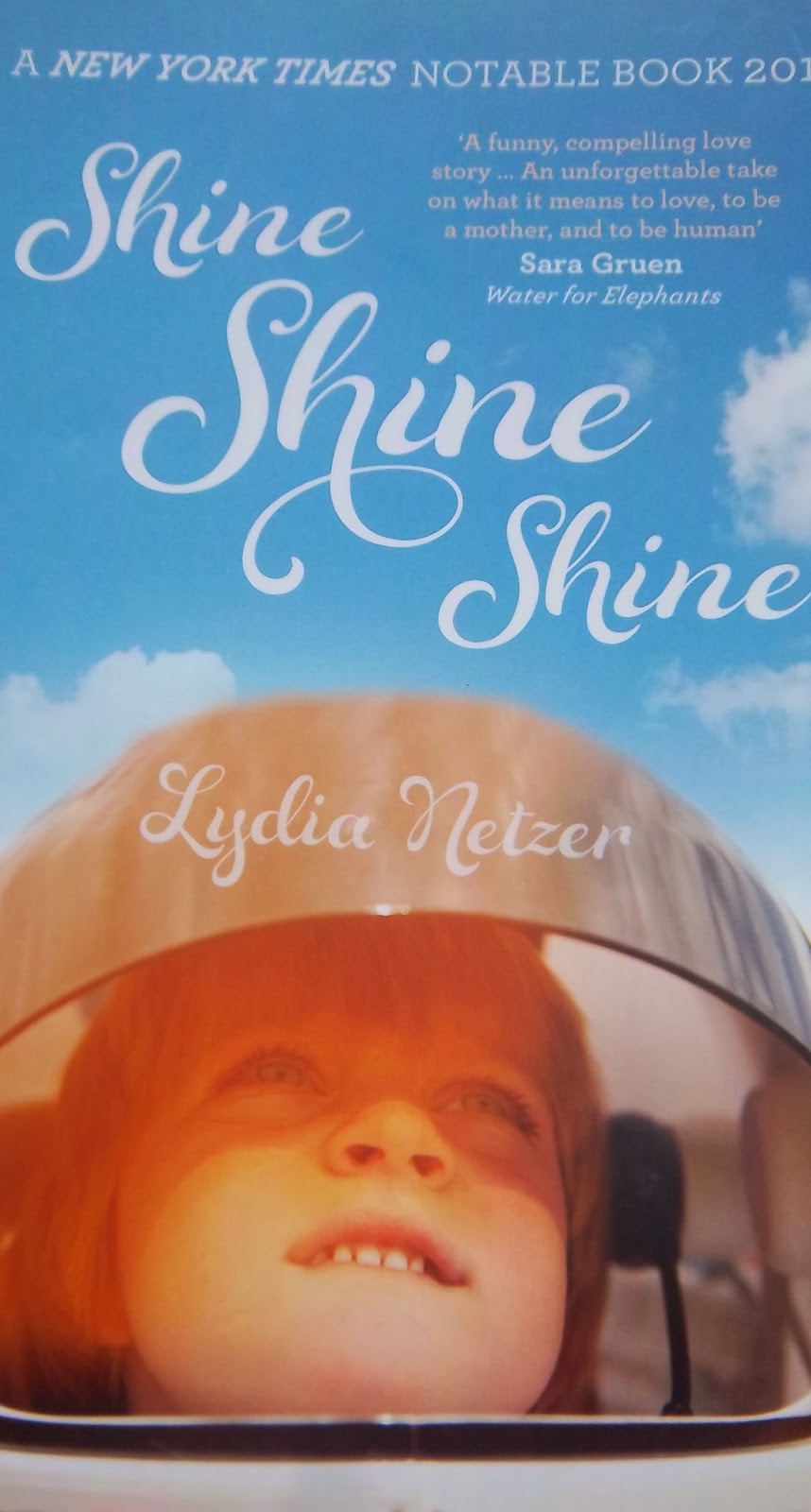 This is the story of an astronaut who is lost in space, and the wife he left behind.

It took me a while to decide whether or not I was going to like Shine, Shine, Shine. Though quite easy to read, written in a simple, rather Alexander McCall Smith-esque prose, the narration feels quite detached: telling, not showing, although in a deliberate, dreamy way. I wouldn't class this as a science fiction novel so much as a love story set in the very near future. It is realistic but occasionally surreal - both characters experience visions that could be prophetic or could be hallucinations, literal pictures of metaphors explaining their world.

It is specified early on that Maxon and Sunny's son is autistic, and it is clear that he shares traits with his father, who is a brilliant scientist but whose mind needs a formula for every human interaction. A lot of the story takes place in flashback, and at first I found it very hard to relate to the characters. Maxon is a being of logic rather than emotion, though he is curious and eager to learn. (I heard Data from Star Trek: The Next Generation's voice in my head for him.) His conversation is stilted, his humour falls flat, and I wondered at first why he had ever married Sunny. Could it really be love? Their interactions seemed so awkward and uncomfortable. The dialogue with Sunny about why he thinks it is time for them to have a baby made me feel quite uncomfortable. But Shine, Shine, Shine is a novel of gradual revelation; as it fleshes out their history and characters, I came to realise that these two unusual people were made for each other, that their love is touching and all-encompassing, even if not easily expressed, and they are really a beautiful couple.

To all appearances, Sunny is a fairly ordinary suburban housewife, expecting their second child when Maxon blasts off into space. Then something happens, and she makes the decision: no more pretending. The layers are stripped away to reveal a quite extraordinary person. Every aspect of her identity is called upon at once: as daughter, mother and wife - her mother is dying, she is expecting her second child, and her husband is in space - but what does it really mean to be Sunny Mann? How does she reconcile how she appears to the world with who she is inside?

Shine, Shine, Shine has a somewhat open ending, not giving you definite answers on what happens next. The present situation is not what this novel is really about, so much as the people involved, what made them and brought them to this point. Instead of answers, we are shown one of Sunny's visions, which, like Sydney Carton's at the end of A Tale of Two Cities, may or may not be taken as truth, but which end the novel on a note of hope. I recommend Shine, Shine, Shine to fans of The Time-Traveller's Wife: even if you find it a bit difficult to get into at first, it's worth sticking with it to the end.

"What, do you want to put pinholes in me and screw a bulb into my brain?" she said...
"I don't think I would need pinholes," said Maxon... "I think you would just shine."

How do we love each other? We love each other like naked children in a strange jungle, when every stump turns into and ogress, each orchid into a lump of maggots. We didn't say, 'I love you,' just as we didn't, after a day of wandering, lost in the trees, turn to each other and say, 'We are the only naked children in this jungle.' Everyone else was just a jaguar or a clump of dirt.
Posted by Katie Edwards at 10:27