If 2013 will be forever remembered as the year we had no spring, then the winter of 2014 will be chiefly remembered for its storms and floods (at least here in the UK. I understand the USA has been experiencing freak snow.) Last weekend I had made plans to stay with my sister just outside London, but the weather forecast was not good. I'd booked myself a late evening train, and all the reports pointed towards having to cancel. However, when I left work on the Saturday night to find it dry and a bit windy, I decided to risk travelling, and aside from a bit of rollercoaster-tummy on the ferry, I had no trouble getting to my destination (though my train time had been altered, causing a bit of confusion, in order to accommodate a couple of extra stations.) I got to her flat just after 10PM, where she was at the ready with copious amounts of curry and her Buffy the Vampire Slayer DVD. She has befriended the staff at her local Indian restaurant/take-away, and ended up with a whole load of freebies "so there's enough for everyone." How many of us did they think would be eating?

In actual fact, the weather stayed fine the whole time I was in London: a bit cold, a bit drizzly, but OK, though the Thames was horribly flooded between Kingston and Richmond. I met up with friends on the Sunday and they pointed out where the cycle path usually was, and the road. All were underwater, with a car parked in the river with a council notice stuck to its back windscreen (probably saying: "your car is getting wet, please move it.")

I thought we'd got off quite lightly on the Isle of Wight, but yesterday, various friends posted photographs on Facebook of some of the coastal towns' flooding, particularly in West Cowes, where the high street was underwater all the way up to Sainsbury's (which is a bit of a walk from the seafront and the ferry terminal.) Apparently the military were helicoptered in to help out. Checking the local news site, I've also just found out that Ventnor Undercliff is being evacuated due to landslides. I've been unaffected by it all, as I live in the centre of the Island and uphill.

One of my Christmas presents was a gift card for Foyle's, so I travelled into London with my sister on the Monday morning, before heading back home via a shopping trip to Southampton later that day. I'd planned to spend it on The Girl With All The Gifts by M. R. Carey and Attachments by Rainbow Rowell, but astonishingly, I couldn't find either of these titles in the famous five-storey bookshop. Not that it was too hard to find something else to spend my voucher on: eventually I settled on The Explorer by James Smythe, which I remembered seeing reviewed on Ellie's book blog, and Dream London by Tony Ballantyne, which was an impulse buy. It is brand-new to me, but looks bizarre, unsettling and fascinating. I bought The Girl With All The Gifts in Waterstone's on Oxford Street (the little one in the Plaza, which I like better than the one with the funny Twitter account; it has a friendlier atmosphere, I think) but could not find Attachments in any of the big stores in either London or Southampton. Not to worry, though, as there was a copy back on the Isle of Wight. 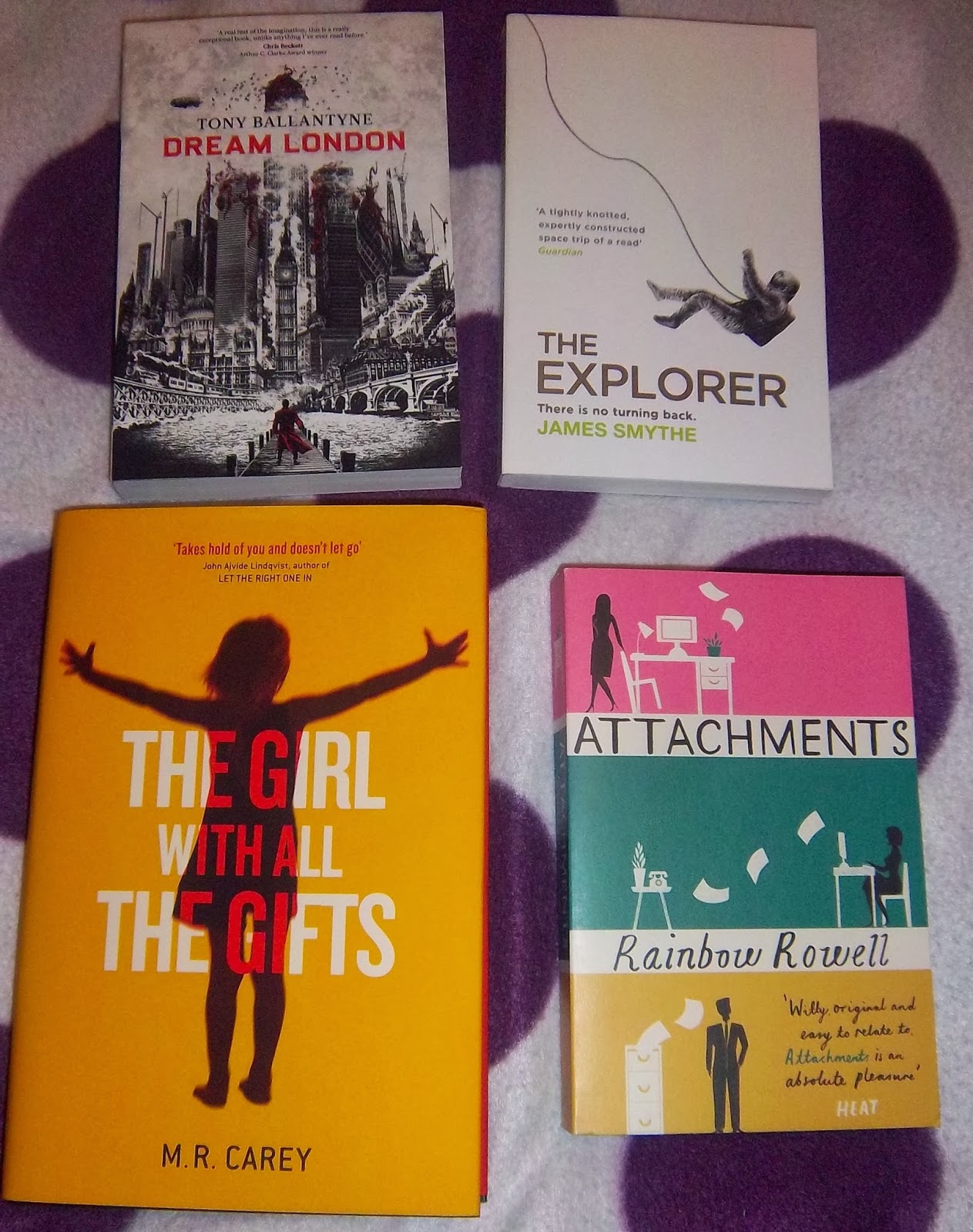 Since I've lost both my local HMV and Blockbuster, I have to do my DVD-buying whenever I get the chance. I'm especially disappointed in the loss of Blockbuster for boxsets - there are so many series I want to watch, but don't want to shell out £20 or so if I don't know if I'll like them. I found the first series of Battlestar Galactica in HMV for £6.99, and a second-hand season one of Heroes in Southampton's CEX. (Now, why don't we have a CEX on the Island? It is needed.) Both of these are things I've been curious about for a while, and did not mind spending just a little more than it would have cost to rent them. In the meantime, I've been continuing watching Buffy and Star Trek: The Next Generation. 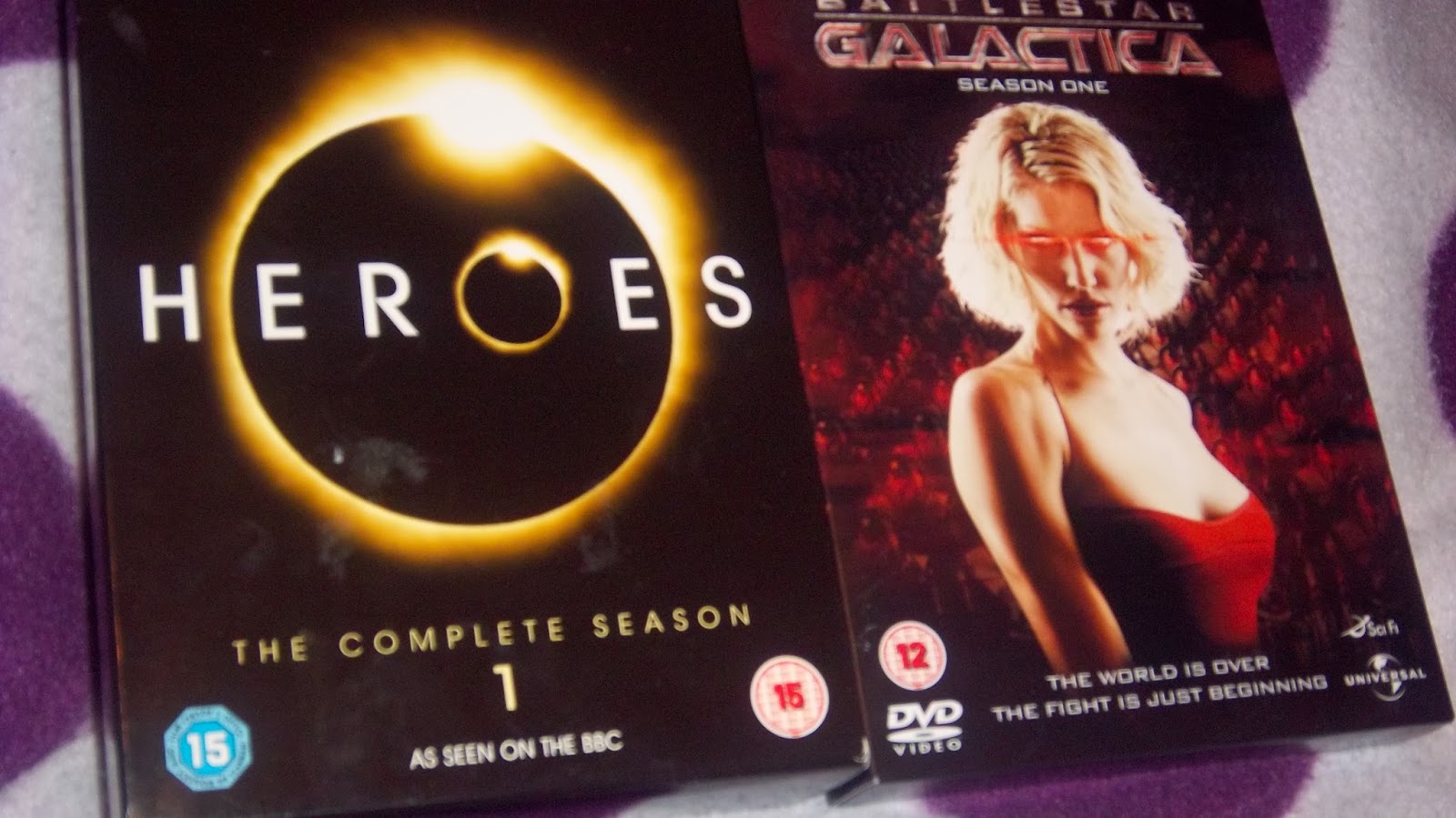 Last week I read through two decent but underwhelming teen novels: Ketchup Clouds by Annabel Pitcher, and Severed Heads, Broken Hearts by Robyn Schneider. I'd read Pitcher's My Sister Lives on the Mantlepiece (or, more accurately, let David Tennant read it to me when I had a migraine) and was very impressed, but unfortunately Ketchup Clouds didn't live up to expectations. I couldn't figure out how old the narrator was supposed to be: her voice came across as much younger than the events she was reporting. I suppose this is fair enough: she must be between fourteen and sixteen, an age where childhood and adulthood sit very uncomfortably together. The cover story alluded to a girl haunted by a terrible secret, but the plot focused more on the run-up to the tragedy than its aftermath, and though beautifully written, it was a storyline that didn't really interest me. 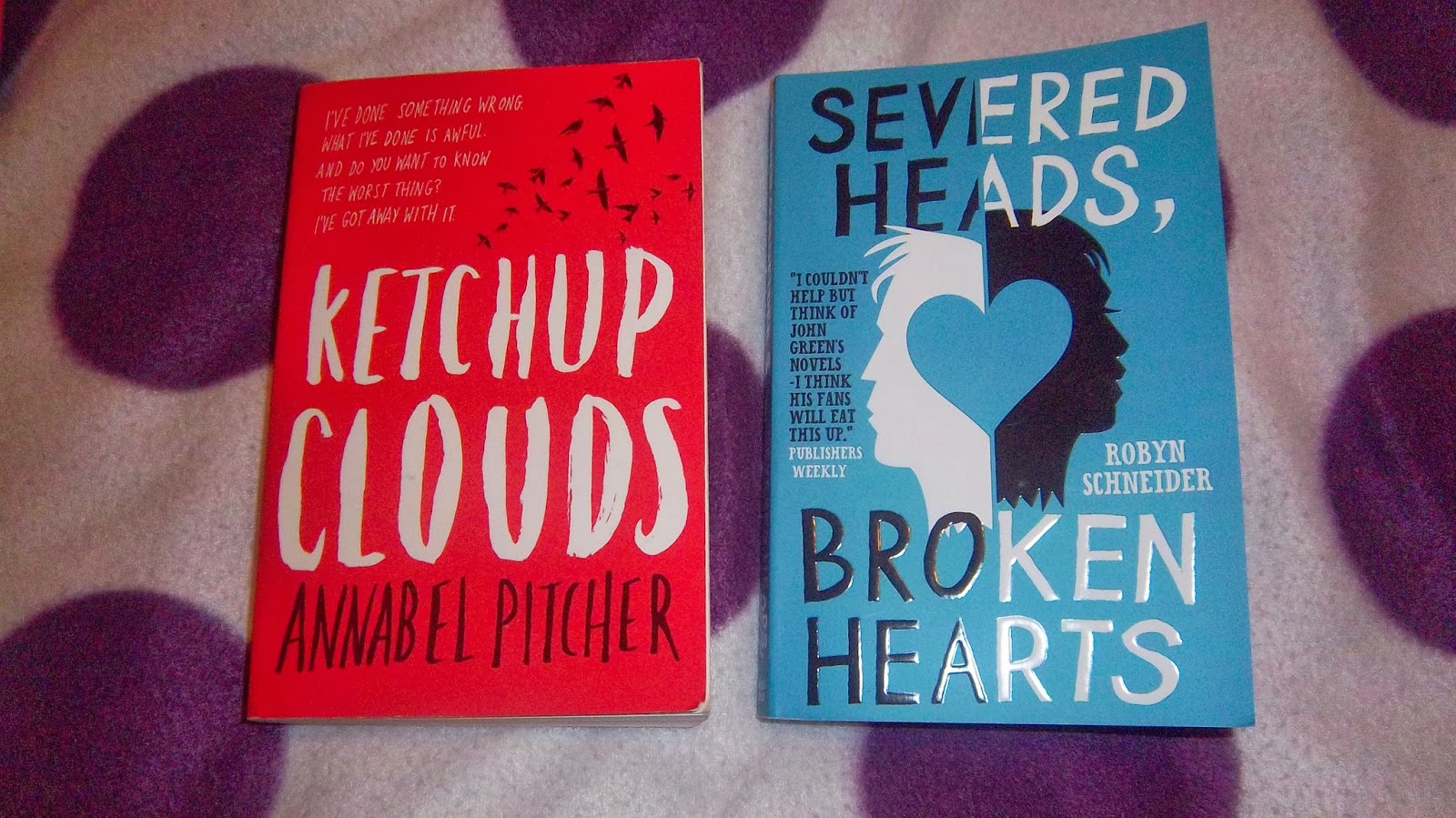 Severed Heads, Broken Hearts is a very John Green-esque coming of age story, funny and affectionate, but unfortunately spoiled for me by the awareness of the Manic Pixie Dream Girl trope. Last year, the Internet got quite indignant about Manic Pixies, declaring them to be a sexist portrayal of women, that they appear only in relation to men and don't get to tell their own story. I don't necessarily agree with this argument: characters look different from the outside than from the inside. If Cassidy, or Alaska Young, or Margo Roth Spiegelman were the protagonists, rather than the love interests, would that in itself stop them from wearing the "Manic Pixie" label? Can you think of any characters who could be "Manic Pixies" if they were shown from another perspective? I wonder if even my beloved Anne Shirley would come across that way, if her story was told from the perspective of Gilbert Blythe. Jeane from Sarra Manning's Adorkable is an interesting version of the character, as the narrative switches between her point of view and the boy's. Also, are there Manic Pixie Dream Boys? Augustus Waters springs to mind. And let's not forget all the supernatural creatures in the form of a teenage male, who are seen only in relation to a teenage girl. An Interchangeable Magical Boyfriend Creature is very different to a vampire, werewolf or faerie narrator who happens to have a girlfriend. Does this mean there is no place for the trope? Nine out of ten times, when I think analytically about tropes, it enhances my reading experience, but occasionally it ruins it. Cassidy Thorpe is a textbook Manic Pixie Dream Girl, and though I don't think that's necessarily a bad thing, the controversy of the trope made me enjoy Severed Heads, Broken Hearts a lot less than I might have done a year ago.

Glen Duncan's The Last Werewolf has been sitting on my to-read pile for a couple of years, so I decided that if I was going to read it, I should hurry up about it. It is very dark - perhaps not surprisingly for a book about a man who turns into a ruthless killer once a month! My preferred version of the werewolf legend is when the person and the wolf are pretty much separate - and that the wolf looks like a wolf, not a weird hybrid. The Last Werewolf uses the hybrid version, which extends into narrator Jake's human life as well. He cannot compartmentalise his human and wolf selves, so he's developed a very nihilistic worldview to cope with his changed nature. So he kills people every month: he has come to terms with this in order to survive. The Last Werewolf is bleakly philosophical, darkly poetic; not always a pleasant read, but it's good to have another version of the werewolf legend to compare with the Lupins, Ozzes and Elenas. 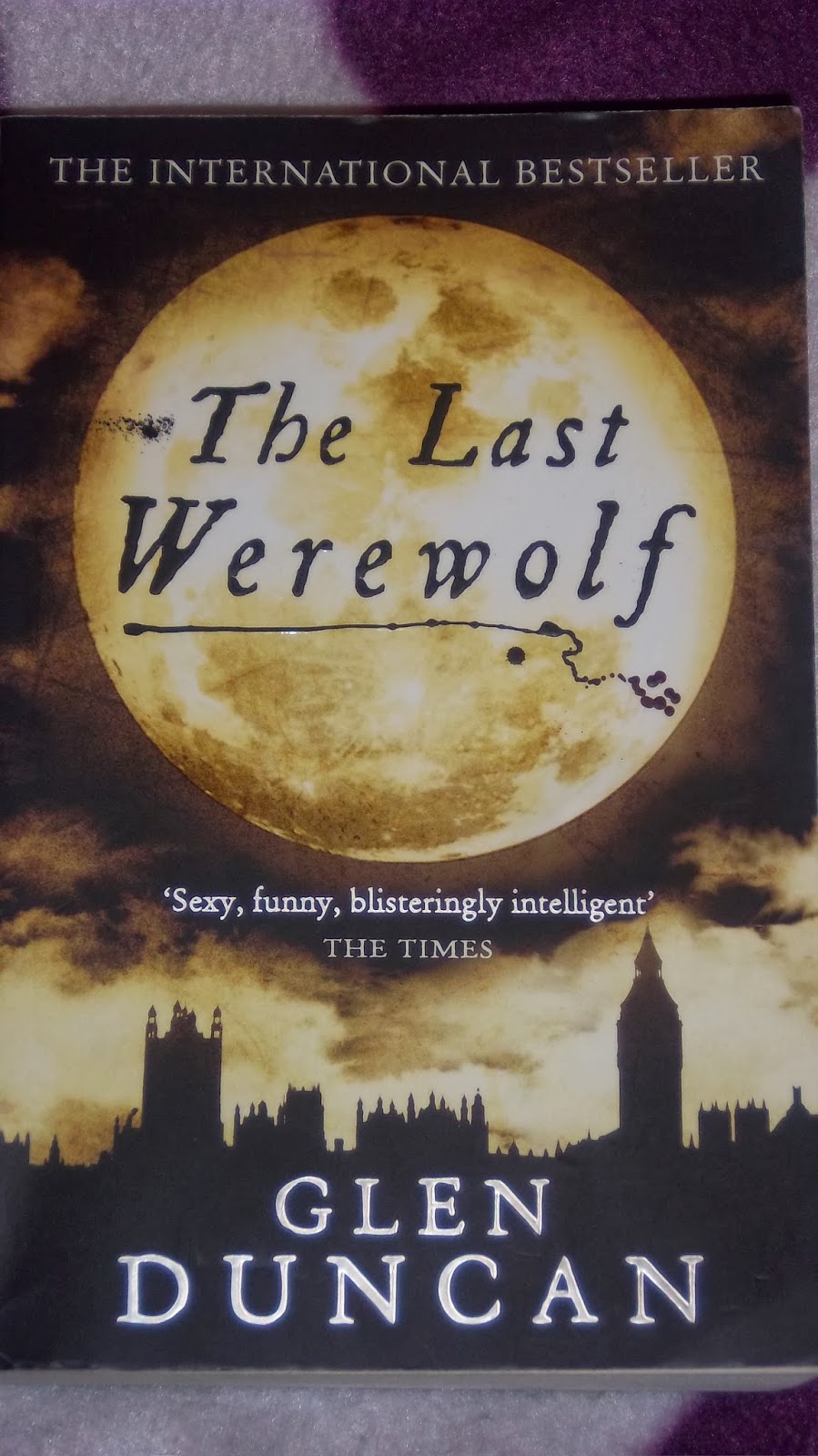 Though I wouldn't call myself a Tom Hiddleston fangirl, I do like him a lot as an actor and a person. He's been acting in Shakespeare's Coriolanus recently, which I haven't been lucky enough to see, but the Twitter-talk about it prompted me to read the play. As is often the case with Shakespeare, I was blown away by how applicable this story of ancient Rome still is today: the tragedy of a powerful man whose fatal flaw is his underestimation and disdain for the ordinary folk. This isn't one of Shakespeare's plays where every other line is a famous quotation, but it does include the words "to fob off" (exactly as one would use it today) "thwack" and "sprightly."
Posted by Katie Edwards at 20:27