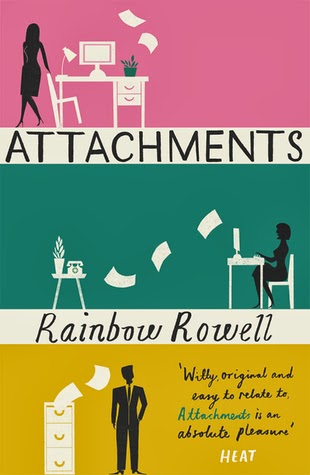 It looks like I'm the last book blogger to read and review Rainbow Rowell's debut novel, Attachments, so I'll try to keep it short. The plot is simple: Lincoln, IT and systems security man at a newspaper office, is responsible for reading any emails flagged as potentially inappropriate sent from company addresses. It is 1999 and the world is still getting used to the internet, and personal emails from company accounts are a definite no-no. Not that this stops Beth and Jennifer! Their names keep popping up again and again, and Lincoln knows he ought to send them a warning, but they are just so likeable and funny that he can't bring himself to do it. And then he realises he's falling in love...

I admit it: I loved Attachments because I'm nosy. Aren't we all? Who can honestly say they've never stalked an ex on Facebook, or spied on twitter-conversations between people we like. Half of Attachments gives that same feeling that we, like Lincoln, are privy to something personal between friends. Like Lincoln, we get to know Beth and Jennifer through their emails, which reveal them to be people who are a lot of fun to hang out with, sharing their relationship and family woes, quirks and insecurities, and a deep abiding friendship.

To my surprise, it was Lincoln that I found myself relating to the most. All three characters are about my age (28) but it is he who has moved back to his mother's house, is in an unsatisfying job, quiet and a bit nerdy and still not over a relationship that ended many years ago. It was part painful, part reassuring to see myself in this character, putting into words the fear that's always in the back of my mind.

"My get-a-life window. I think I was supposed to figure all this stuff out somewhere between twenty-two and twenty-six, and now it's too late."

And of course, Lincoln finds out through the course of the novel that it's not too late at all. He's a really lovely character, thoughtful, kind and well-liked by anyone who comes into contact with him. He befriends an older employee in the staff room and enjoys listening to her stories about her dogs, shares his lunch with her and helps her move house. He prefers nights in playing Dungeons and Dragons to nights out partying, and buys violet-patterned bedsheets instead of something more manly, because he likes violets.

Lincoln doesn't need to see Beth to know he's in love with her: her emails to Jennifer are full of fun, kindness and her sense of humour. And occasionally they mention "My Cute Guy," who she has seen about the offices, but whose identity is unknown. On the first mention of this mysterious stranger, I crossed my fingers that he might turn out to be Lincoln. When he did, I may have let out a girly squeal. Their romance - if you can call it a romance when the characters don't interact for most of the book - is really heartwarming and sweet, and I really enjoyed watching it play out towards its conclusion.

If you're looking for a chick lit novel for people who don't like chick lit, let me recommend Attachments.
Posted by Katie Edwards at 21:27