I'm assuming I'm the last person to watch Buffy, but in case I'm not: spoilers. 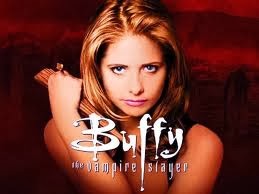 After the first couple of episodes, I quite enjoyed the first season of Buffy as a series of one-off monster-of-the-week episodes. Season two is where it really kicks off. Its opening wasn't promising: the first episode looked like textbook How Not To Sequel, showing the vampires attempting to bring back the Master from the dead, the villain Buffy defeated at the end of the previous season. I didn't love the Master - he was cheesy and somewhat irritating, certainly not a strong enough villain to be the Big Bad of all of Buffy. I was relieved when this story came to nothing, serving mostly as an excuse for Buffy to find closure (which she did by smashing the Master's skeleton into dust with a hammer.) With the Master out of the way, the obvious next villain must be The Anointed One, a seriously creepy child who is leading the vampires. Or so you'd think. 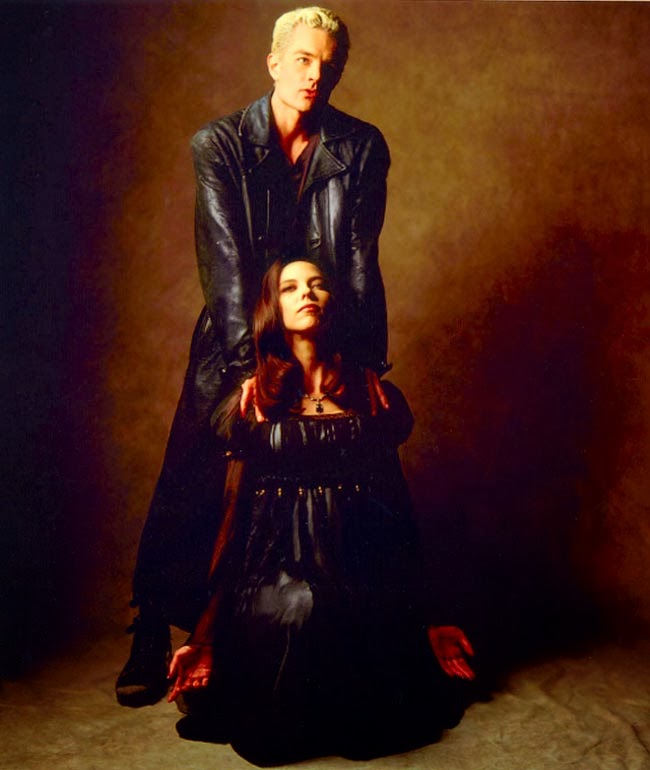 Enter Spike. From the minute he screeched his car into Sunnydale, I knew that this series was never going to be the same again. I knew who he was immediately - I remembered all my friends loving Spike from the first time around, but didn't see what the appeal was. Of course I didn't. I only saw pictures. But as soon as he struts onto the scene, even with his vampire-face on, and an accent that is supposed to be London, but wobbles, Spike exudes a sort of villainous charm, the Lestat to Angel's Louis. In his first episode, Joss Whedon subverts our expectations in his characteristic way, when Spike effortlessly destroys the Anointed One at the end of his very first episode. This is not someone you want to mess with. Nor is his girlfriend, Drusilla, who is quite mad: part a malevolent River Tam of Firefly, part Helena Bonham Carter as... well, any of her roles, and all very sinister indeed. 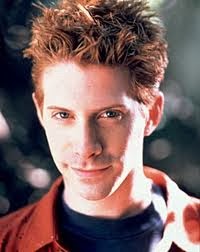 Season two is where the main characters start to find success in love. A new character is introduced: Oz, a musician and in the year above them, who upon seeing Willow becomes utterly "Who is that girl?" Likewise, I fell head-over-heels in love with Oz: he's cool and laid-back and utterly adorable, and it made me very happy to see Willow get over her unrequited fancy of Xander and pair up with Oz. They are quite possibly the cutest couple ever. And then Oz becomes a werewolf. I've had a soft spot for decent people who become werewolves ever since Remus Lupin, and so I was utterly thrilled to see that my favourite new character got this plot - even if the werewolf is basically a man in wolf mask and a hairy suit. (It beats most CGI werewolves these days.)
besotted.

Meanwhile, Xander starts sneaking secret smoochies with... Cordelia?!?! The mean-girl queen bee who has nothing but contempt for Buffy and her friends, and particularly Xander? I wouldn't quite say that theirs is a Benedick and Beatrice relationship, but it is certainly a fiery one. (It'll never last.)

But most important is Buffy's relationship with Angel, which is consumated half-way through the season. And then, everything changes, Whedon-style. Buffy's good vampire boyfriend is gone, turned into a sadistic monster, the worst of all the vampires. WHAT? I had absolutely no idea that this was going to happen, and was both upset and awed. The story's not meant to go that way. And I love it when a story doesn't go the way it "should."

I expected Angel to be reformed soon after his tranformation, and spend the rest of the season angsting over what he'd done. His actions in the episode "Passion" proved me wrong: not only does he murder Giles' new girlfriend, Miss Jenny Calendar, but he tucks her body up in Giles' bed, leaving a romantic rose-trail up the stairs. So much crueller to Giles - and agony for the viewers to see Giles look so happy knowing what he is about to find. This is not a little blip on Angel's record, Whedon tells us. Broody good Angel is not in there any more.

Season two introduces Kendra the Vampire Slayer - Buffy's replacement, because she "died" at the end of the season one finale, if only for a minute or two. This poses the question: is this "only-one-slayer" business all messed up forever now? When Kendra dies (she lasted longer than I expected, but not past the season finale) will she be also replaced, in a continual line of two slayers forever (unless another one dies briefly and revives, again, and then there were three?) These things bother me.

Who would have predicted at the beginning of the season that the Big Bad would not be the Master, nor the Anointed One, or even Spike and Drusilla, but handsome, harmless Angel? Congratulations Angel, you have character! You have depth! Shame Buffy has to kill you because you're about to bring about the end of the world. But wait! Willow may be able to magic Angel's soul back into him. My idea of the series' tragic ending would be that Angel would turn back to good at the exact instant that Buffy staked him. (Yes, I know he gets his own series later down the line, but dead doesn't always mean dead in this 'verse. I mean, c'mon, vampires!) As if that wouldn't be tragic enough, once more, Joss Whedon tweaks the narrative just enough to make it even more devastation. Angel gets his soul back... but Buffy still has to kill him to save the world. Deliberately and in cold blood.

I have said it many times: Joss Whedon feeds on his fans' (and characters') pain and anguish. Season two just confirms this... and I've a horrible feeling that it has only just begun.

Most Memorable Episodes. (I'm not sure "favourite" is the correct word any more.)

4. Inca Mummy Girl: In which Buffy's exchange student turns out to be an Inca Mummy.
6. Halloween: In which halloween costumes change their wearers.
7. Lie To Me: In which Buffy is reunited with an old classmate, who is too interested in the vampires.
11. Ted: In which Buffy's mom gets a new boyfriend, who is not as nice as he seems.
13-14. Surprise/Innocence: In which Buffy turns seventeen and sleeps with Angel, who turns evil.
15. Phases: In which Oz is revealed to be a werewolf.
17. Passion: In which Angel proves what he is capable of.
19. I only have eyes for you: In which an illicit romance with a tragic ending is acted out again and again at Sunnydale High. Points deducted for wasps.
21-22. Becoming: The season finale, in which everything hurts and nothing is OK.
Posted by Katie Edwards at 12:50