From a Buick 8 - Stephen King 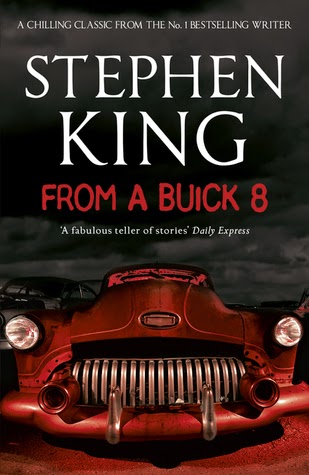 In the months after Curtis Wilcox's death, his son Ned spends more and more time around the police barracks among his dad's old colleagues. When he discovers the vintage Buick Roadmaster locked up in Shed B, naturally Ned is curious. But what is inside that shed is no mere car...

From A Buick 8 feels rather like a classic ghost story, the sort told around a campfire by torchlight. It is set out as a story within a story, with the narrator Sandy reporting to the reader the tale he had previously related to Ned. This framing device took me a while to get used to, working out which later of storytelling I was reading at any one time, but it means we get to take our cues from seeing Ned's reaction to the things he is told and shown - and from Sandy's thoughts about Ned's response. This also sets up the final act in the present day.

When I started reading, although I enjoyed getting to know the police team of Troop D, I felt that it was taking a long time to really get started. 150 pages or so in, all the Buick had to show for itself was a perfectly shiny condition, mechanisms that couldn't possibly work, a couple of missing people and a localised lightning storm in the shed. Eventually it became apparent that the car was some sort of portal to another world or dimension, a two-way door. People would disappear in its vicinity, and then a few unearthly creatures or plants appeared after the lightning phenomena, and would promptly die. There is something Lovecraftian in the things that appeared from the Buick, horrifying in their strangeness but I didn't feel overly impressed with the novel as a supernatural tale of terror.

But partway through, I realised, this isn't what it's really about. I ought to know better by now. Although Stephen King is known for his horror stories, what makes him stand out above the rest is everything else, the humanity. From A Buick 8 isn't really about a creepy car, or creatures from another world. It's about family: the families we're born into and the family we make for ourselves. It's about grief, and curiosity, camaraderie and a shared history, about the life of a police troop over a lifetime, and about the connectedness of events. Nothing happens in a vacuum, but life is made up of "links in a chain." Conversely, King reminds us that even so, real life does not work out into a neat little narrative. The world doesn't always give you the answers, and given the cops' reaction to the Buick and its mysteries, I wonder if the message to take away is that we couldn't handle the answers if we were given them.

From A Buick 8 was not one of King's more famous books, and I came to it without any prior knowledge or preconceptions. Certainly it is no Carrie or The Shining - but neither, thankfully, is it a Dreamcatcher. If you come to it expecting a fast-paced, action-packed thriller, you may be disappointed, but if you accept it for what it is - a pensive, brooding examination of storytelling - it's well worth a read.
Posted by Katie Edwards at 10:30