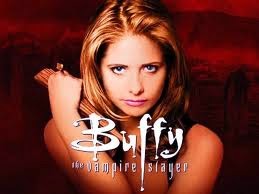 After the doom and gloom of Buffy season 6, the beginning of season 7 comes as quite a relief. We go right back to the beginning with the opening of a brand-new Sunnydale High School building on the site of the old one, which was destroyed at the end of season 3. You'd think the powers that be would take the opportunity to find a new, safer site for their teenagers to attend school, but no, apparently not. Buffy takes a job as student counsellor, and Xander is on-site too, finishing off the building work. Only Willow is absent, staying in England with Giles attending some kind of Dark Magic Anonymous group.

The relief and nostalgia factor meant that for a while I overlooked some of the sloppiness of the storytelling. Most notably, we are told rather than shown that the apocalypse to end all apocalypses is on its way. An ominous voice tells everyone, "From beneath you, it devours," whatever that means. Sounds scary enough, but weird and terrifying occurrences are part of Sunnydale's local identity. We've established that. Yet Buffy and the Scoobies quickly conclude that this time the end really is near, and we know they're probably right for the sole reason that this is the final season and therefore deserves an epic finale.

Season 7's main villain is the ultimate in Big Bads, a being that calls itself "The First," and has no form of its own, but takes the shape of whichever dead person is most likely to freak out its audience the most, manipulating people with their individual weaknesses. Buffy is the First's favourite form - she may not be dead now, but she has been dead and therefore counts. It even implies at one point that it takes more than the appearance from those it imitates. Could Buffy herself be a part of the First?

This aspect of the First led to what I think was the season's biggest misstep. At the end of one episode, we see Giles swiftly attacked by one of the First's henchpeople, and the screen cuts to black. This incident is not mentioned again for about four or five episodes, and when Giles appeared afterwards, I spent most of my concentration trying to prove that he was dead, and that the First was taking his form. It turned out to be a red herring, and instead of feeling impressed that the writers had outsmarted me, I just felt cheated. They didn't outsmart me - they merely said, "Haha, no, tricked you," without any better explanation. This might have worked if it took place over a single episode, but over four or five, it merely distracted me from everything else that was going on. (Not that I wanted Giles to be dead, of course.)

Although season 7 had some great ideas, it didn't hook me as much as the rest of the series. I don't know if this was because I'd taken a couple of weeks' break from Buffy before starting the final season, or because the storytelling just didn't come together as well as it should. The central characters seemed to take a back seat, too. Willow, Xander, Anya and Dawn all had their moments in the spotlight, but I felt like the writers had grown tired of them, instead concentrating on Spike's search for redemption, the Potential Slayers (though as a plot device more than a new team of rounded characters) and Buffy as the lone general in the big war against the ultimate evil. It seems inevitable for every fantasy story to end in a big war to end all wars, notably Harry Potter, with which I drew many parallels throughout the run of Buffy.

But how can one fight an incorporeal being? The answer is to bring in an army of "ubervamps" which reminded me so much of the orcs in Lord of the Rings, and a human villain called Caleb, played by Nathan Fillion from Firefly. Caleb really made my skin crawl with his smiling hate-speech (but I am so tired of the "sinister minister" trope. It's never the butler who dunnit, but if there is a priest or a vicar, nine times out of ten they are the bad guy.) Caleb establishes his role as a real threat by inflicting the most serious, lasting damage on one of our heroes -squishing Xander's eye, eurrrrgh! - and when this group includes someone who has died not once but twice, that's saying something.

I grumbled a lot about season 7, even up to the penultimate episode, but the finale is as epic as you could hope for. My chief problem when I started watching Buffy was "WHY is there only one slayer? One chosen one - chosen by whom? Why should one person have to take on all this responsibility alone?" Finally, after seven seasons, this question is addressed and challenged, and Buffy decides enough is enough. So a bunch of men decided there should be one slayer thousands of years ago. Today, the slayer makes her own decision: “From now on, every girl in the world who might be a slayer will be a slayer." And it is awesome.

This being Joss Whedon, two main characters die in the final showdown: One suddenly, in battle (Anya) and the other, Spike, is killed by a Necklace of Heroic Sacrifice, taking out not only all of the bad guys, but the entire town of Sunnydale! Wow. Thankfully the town had been evacuated earlier, as the years of weird activity finally got too much for the residents. Well, that's certainly not doing things by halves. Our battle-scarred and weary heroes look back at the smoking crater that had been their hometown, and realise that finally, it's over. The weight of the world is no longer on Buffy's shoulders alone (with a few friends to share the load.) She can do anything.

"What are we going to do now?" 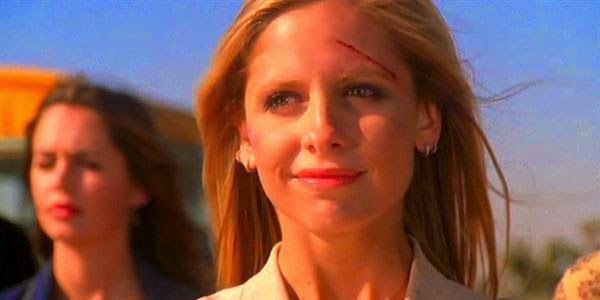 3. Same Time, Same Place. Willow returns from England, but she and her friends seem to exist in parallel dimensions, not seeing each other despite being in the same place at the same time. However, this episode also features the most horrifying monster of the week ever, Gnarl.
7. Conversations with Dead People. A really terrifying episode. The First appears to the Scoobies in different forms, and messes with their minds.
16. Storyteller. Whatsisname, the other one from the Trio, now living among the Scoobies and the potential slayers, makes up his own version of everything that's happened. A mostly comic episode which takes an unexpected emotion turn when he is forced to face reality.
22. Chosen. Buffy's had its highs and lows, and ends on an epic finale that really does it justice.