Hello to you all. I hope all of you who are enduring unusual heat and humidity are finding ways to deal with the weather. (I will not complain. I complain when it is cold and grey and dreary. I will not complain about the sunshine. The air conditioning timer at work apparently being set for Sunday trading hours on Saturdays - that I will complain about.) I had been very worried about some changes at work, but so far - so far - it is all going quite smoothly and I'm still enjoying my work for the most part.

I spent my days off this week at the beach and in the sea - it is absolutely gorgeous swimming now, and I found a new favourite beach, the morbidly-named Small Hope beach in Shanklin. My seaside reading has been Terry Pratchett's Discworld series. I have certain favourite books which I read and reread on a semi-regular basis (the Watch books, the Witches books, Going Postal, Monstrous Regiment) but I've decided this week to go back to the start and fill in all the gaps. ("You mean there are Discworld books you haven't read?!" has been the response of everyone I've told about this plan. I suspect this was partially influenced by blogger Mark Oshiro's latest mammoth project which is the entire Discworld series from start to finish. (He is also watching Star Trek, and posted his first entry, I believe, a year to the day after I first started watching the original series DVDs.) If you're not familiar with Mark, I urge you to check out his sites, in which he reads and watches favourite books, films and TV shows in a state of complete ignorance, and is utterly adorable. It's the closest thing to discovering a new story for the very first time, all over again.

I was often advised to start my Discworld reading with Mort, which was "where it gets good." The Colour of Magic and The Light Fantastic are interesting to read which a good knowledge of Pratchett's later books, seeing how things have changed. The style of the first book, in particular, is more openly parodying the tropes of the fantasy genre (I saw definite nods to H. P. Lovecraft and the Dragonriders of Pern books,) when later on he uses the fantasy setting to comment on the real world. A lot of thought has clearly gone into the world-building, whereas later, when readers are familiar with the setting, the focus shifts to the characters and a depth of message beneath the humour and the puns. Oh, the puns!


Exhibit A: They had dined on horse meat, horse cheese, horse black pudding, horse d'oeuvres and a thin beer that Rincewind didn't want to speculate about.

Exhibit B: "Rincewind, all the shops have been smashed open, there was a whole bunch of people across the street helping themselves to musical instruments, can you believe that?"

"Yeah," said Rincewind, picking up a knife and testing its blade thoughtfully. "Luters, I expect."

I received my Ninja Book Swap parcel a couple of weeks ago, from Sophie: The Shock of the Fall, by Nathan Filer, whose name I keep on misreading as Nathan Fillion. I've had my eye on that since it was first published, picked it up and started reading it at work a few times *whistles innocently* but never got around to buying it, despite it being on various different special offers at different times. She also sent me a brilliant card and an adorable wooden postcard of Alice in Wonderland and a bar of Lindt Lindor, which sadly has long since ceased to exist. That is my favourite chocolate out of all the many kinds of chocolate I love, but it wasn't going to last very long in the July heat, so I put it out of its misery sharpish. So thank you, Sophie! 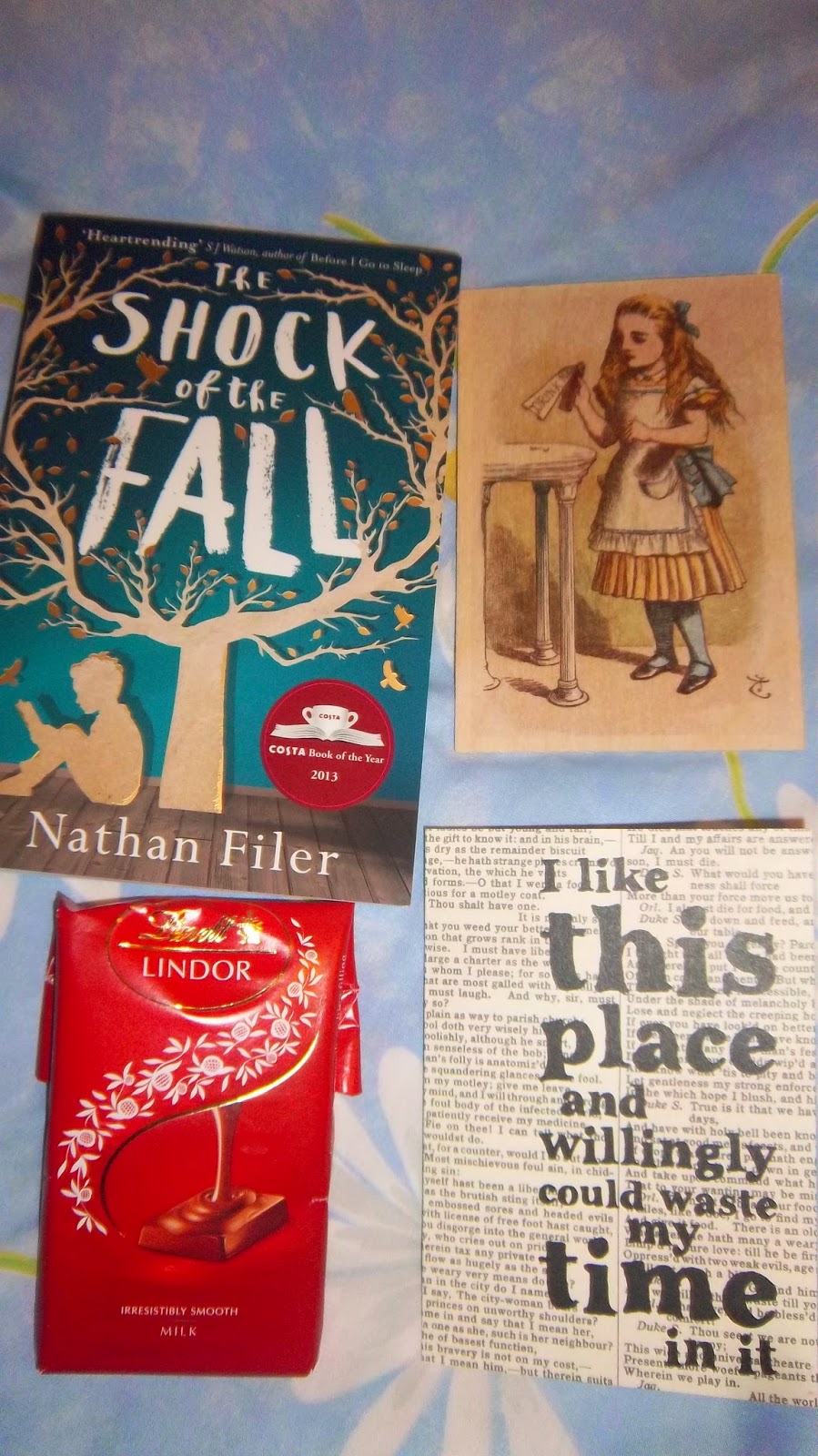