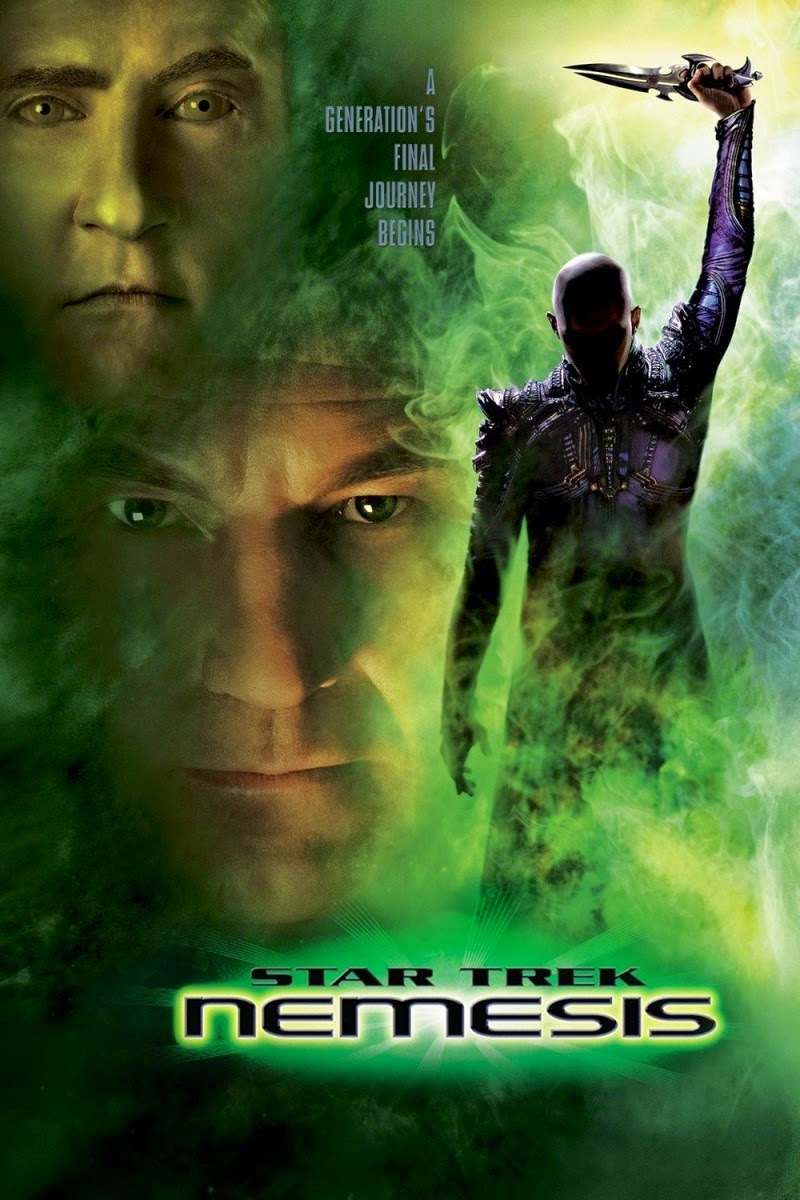 It is a popular opinion among Star Trek fans that the even-numbered films are really good, while the odd-numbered ones are less so. (This is a fair description, although I really liked III and am rather fond of I despite its slowness.) Despite the Next Generation and reboot films not being officially numbered, the pattern continues - if you include Star Trek parody film Galaxy Quest as number 10, in between Insurrection and Nemesis. (I like to include Galaxy Quest, as it keeps the odd-even pattern tidy, so I really ought to have reviewed that film already. Short version: it's hilarious!) As the last Star Trek movie to be made before the 2009 reboot-of-sorts, I think it's safe to say that Nemesis did not go out on the high that it aimed for, although it is not an embarrassment like The Final Frontier or something I refuse to acknowledge like Generations. But a month or two after watching it (thanks to Christmas and work and lack of computer getting in the way of my review-writing) it's a bit fuzzy in my memory, and I'm writing from less detailed notes than some, so please forgive a rather sprawling review.

Just as the original crew finished off their time in the Enterprise by overseeing a peace treaty with their long-term foes the Klingons, so does Nemesis hinge upon reconciling the Federation's differences with the other main antagonists, the Romulans. (It's rather bittersweet to watch these negotiations with a knowledge of what happens in the 2009 Star Trek film, which is mostly a reboot but also a sequel. Wibbly-wobbly, timey-wimey.) As the story can be paired with The Undiscovered Country, so there are doubles and echoes within the plot, notably with the discovery of a prototype android resembling Data, and a younger clone of Captain Jean-Luc Picard called Shinzo, who doesn't resemble Picard at all except for being bald. In Shinzo we see what Picard might have become under other circumstances, and the film juggles questions of nature and nurture forming a personality for good or ill.

Star Trek: The Next Generation tends to engage with my head rather than my heart, and although there are a lot of ideas to ponder about fate, destiny and so forth, the plot itself is quite a weak one, relying on phaser action over storytelling. Yes, there are some impressive action sequences - using the Enterprise to ram Shinzo's ship at the end was awesome and horrifying in equal measure. (I seem to have a thing about big modes of transport being used as weapons or generally having disasters, see the train in Skyfall and the starship falling out of the sky in Star Trek: Into Darkness, not to mention the fate of the original Enterprise. It leaves me feeling a bit shaken up.) But ultimately, the story fell a bit flat for me, a bit of a damp squib for the franchise to end on. Even Data's heroic sacrifice at the end, although it had both my dad and me shouting a big "NOOOOOO!" in stereo, did not have the same effect as the other heroic sacrifice it evokes from The Wrath of Khan. In the B4 android there is a potential cop-out. If the Enterprise crew are able to upload Data's, well, data, into this other android, is it basically the same as having him back? I think the film's emphasis on individuality suggests no, but I'm not sure if my conclusion is the intended one.
Posted by Katie Edwards at 20:00