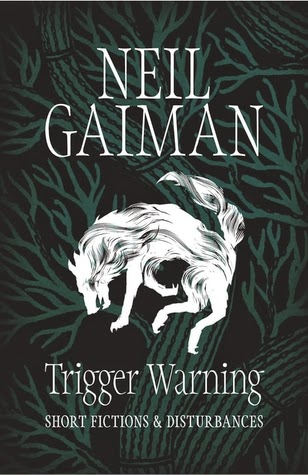 My reading has been very slow since I picked up Neil Gaiman's latest short story collection, Trigger Warning. "What?" I hear you cry, "But you love Neil Gaiman! You ought to be racing through his latest book at light speed!" But such is the power of his short stories that I found myself unable to go straight from one tale to the next without taking some time to digest what I had just read. If I tried, I found I would take one story with me into the next. Gaiman's writing lingers, whether it be a letter from a human statue, a Doctor Who adventure, or a reinvented fairy tale or three. You will find all of these and more within this collection, and I'll share a couple of lines about each piece:

Gaiman opens this collection with a simple poem about - well, making a chair! But it is also about making art, and how it too should not be undertaken lightly.

I was reminded a little of American Gods with this exploration of a strange roadside attraction, run by someone with a story of his own. The chatty tone is underlined with a dawning sense of unease, hints more frightening than concrete images would be, until I found myself on the verge of shrieking through the pages to the narrator, "NO! DON'T DO IT!"

The Thing About Cassandra.

What is real? this story asks. What happens when your imaginary first girlfriend comes to town? The shift in perspective at the end makes you return to the start and reread with a new understanding, looking for evidence that seems, if not obvious, hidden in plain sight all along.

Down To A Sunless Sea.

This was a piece I had read before, online, and the images and tone stayed with me even though I'd forgotten the details, returning to this unsettling monologue as though trying to recall a half-forgotten nightmare.

The Truth Is A Cave In The Black Mountains.

Another story I'd read before, in the anthology Stories. It starts off as a subversive fairy tale, a dwarf's quest, but builds up an ominous foreboding. You know no good can come of this quest, you think you are prepared, but I tell you, you are not.

The poem's title, of course, evokes Robert Browning's "My Last Duchess," so I went into it full of suspicion. But of course Gaiman subverted my expectations. He is not here to tell the story you already know.

All about the stories that are lost when someone dies, leaving behind just a few souvenirs and an unsolvable mystery.

A story written as answers to questions we do not see. Weird and funny, but with an underlying sadness and dread.

A Calendar of Tales.

(How does one write a series of mini-reviews within a mini-review? Just a few words per tale. I'd read this collection as a free ebook on my phone.)

A Case of Death and Honey.


Exactly why would Sherlock Holmes take up the pastime of bee-keeping? How could it possibly keep that brilliant mind occupied? In "A Case of Death and Honey," we discover that it is part of unravelling the Great Detective's most challenging case yet, with a very Gaiman twist and possibly a bit of meta-commentary too.

The Man Who Forgot Ray Bradbury.

This is a love poem in prose, and a cry of grief and anguish at the fear of losing something so important it has been woven into the fabric of the world-as-we-know-it, and the holes it must leave if it were to be erased. A fitting tribute to a beloved writer who makes the world make that little bit more sense.

Perhaps this is not so much a story as a musing on what makes the city of Jerusalem what it is. I wasn't really sure what to make of this.

Eek! A writer of scary stories meets his match in a small boy. A simple tale at first, a bit eerie, a bit gruesome, and perhaps you grow complacent. Then the last couple of lines change everything you thought you knew about this story, and leave you shaken and questioning what you just read. (It's probably fine. Probably nothing. Probably.)

An Invocation of Incuriosity.

This is more of an other-worldly setting than Gaiman usually uses, borrowing from Jack Vance's Dying Earth (which I have not read but which I have now added to my mental list.) A story framed within a story, and the question is how the two tales are connected, why this stranger launches into this story. I had a vaguely Magician's Nephew/Last Battle feeling from this "Dying Earth" setting.

Why does the time we live in not live up to all we were promised in science fiction in days gone by? Enter the Uninventor. This story is fun, lighter than most in the collection, though vaguely sad. It has a wickedly mischievous ending.

A Doctor Who story set during the beginning of the Eleventh Doctor's travels with Amy Pond, before Rory joined the team. I'm still not over the excitement of Neil Gaiman's first episode, "The Doctor's Wife," the anticipation, my - correct - sudden realisation of who the titular "wife" would be, the day before the episode aired, the joy that the episode lived up to and exceeded my wildest hopes. "Nothing o'Clock" is just as brilliant, with a brilliant monster, the Kin, genius and scarier than I've found Doctor Who to be in a long time. And I like the use of time travel to the 1980s, a different time but not all that long ago. It was good to see young Eleven again, but we also get a glimpse of his darker side, the side encountered by the "family of blood" back in David Tennant's time in the role. (Although I like Peter Capaldi's Doctor, I don't think the series as a whole has been up to standard since about the mid-season break of season 6.)

Diamonds and Pearls: A Fairy Story.

These days Neil Gaiman comes as part of a team with his wife, the musician Amanda Palmer. They both have their own careers, but they join forces from time to time. "Diamonds and Pearls" originally was a part of her "Who Killed Amanda Palmer" project. Set in a contemporary city, there is no denying this is, as it claims, a fairy tale, but a very dark one, with elements from the classics, but not as you would know them from Disney.

The Return of the Thin White Duke.

This story read like a colourful rock epic, reminiscent in tone to the Sandman comic and music. Weird, not quite graspable.

I assumed this was another Amanda Palmer-inspired story, as it is about a living statue, one of her former professions. Apparently not. Hopefully not; it takes a really sinister and horrifying turn.

A poem of Sleeping Beauty from the wicked fairy's point of view, injured and aggrieved.

The Sleeper and the Spindle.

I've written about this one before; it was published as an illustrated book last year. A crossover between two fairy tales with a lot in common. The queen and princess do not need any handsome princes to do their rescuing for them, thankyouverymuch! Another familiar tale with a twist - and not necessarily the one you were expecting if you've encountered spoilers on the internet.

A poem with a jaunty rhythm but which seems to slow as you dwell on the imagery of time, hurt and revenge. A haunting, dark fairytale character.

The legend of an Irish saint, turned into verse with a very solid meter. But Columba and "martyred heretic" Oran seem like very strange choices to be celebrated as saints by the church! The story of the poem does not sit comfortably even before you think of the horrors within.

We are reunited with American Gods' hero-protagonist Shadow, as he spends a little time in the Peak District, a place I love because it is interesting and ruggedly beautiful even when the weather is rotten. It is a land that tells a thousand stories. "Black Dog" shares some themes with the previous poem, and Gaiman skillfully builds this story around an image with more than one meaning. Shadow is quite a passive character, but he is a good one to hang out with to see the world's curiosities and listen to its people.
Posted by Katie Edwards at 21:02