A Girl of the Limberlost - Gene Stratton-Porter 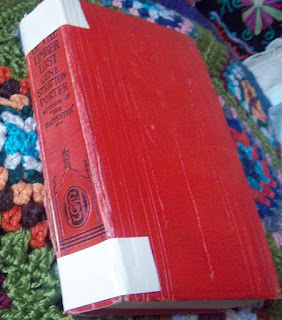 "But what is a limberlost?" my childish self wondered. I was at the height of my school-story-loving days, which would place me between ten and twelve years old. I must have been at some family function, and bored, so my Grandma went to her bookshelves and found an old favourite from her own schooldays, an ancient red-covered book held together by tape, smelling of dust and vanilla. Flash forward to 2015, and A Girl of the Limberlost now sits on my own bookcase - or rather, that same antique bookcase with the glass doors, but now in my room and full of my own childhood favourites. When my Grandma moved out of her house into a retirement flat, she let me choose from a selection of her books, as well as the bookcase, and I vividly remembered enjoying this one, even if I probably didn't finish it, and didn't actually remember what the Limberlost was. (It was an area of swampland in Indiana, full of wildlife and secrets.)
A Girl of the Limberlost is a sequel to Gene Stratton Porter's novel Freckles, but I read it as a stand-alone novel and didn't feel as though I'd missed out on much. It follows Elnora Comstock, a determined young girl, as she works her way through high school, against the wishes of her loveless mother Katharine. Although the language and details had changed, the opening chapter read just like so many modern-day books for teenagers, as Elnora turns up to her new school unprepared, unfashionable and humiliated. It reminded me a lot of the start of Eleanor and Park, and I realised that although fashions may change, high school students do not.

Luckily, Elnora has a kindly aunt and uncle, who are determined to make sure that she gets the upbringing and love that her mother has neglected. Katharine resents Elnora due to her being born at the same time that her husband, who she idolised, drowned in the swamp. Their fraught relationship is central to the book, and eventually Katharine comes to realise that the man she's been resenting her daughter over for sixteen or more years was not the perfect husband she has believed.

Elnora bears a few warning signs of being a turn-of-the-century paragon of virtue: generous to the poor, hard-working, beautiful and devout. But she is a very human character, one who may have an optimistic outlook, but who feels keenly her mother's neglect and the shame of being the outsider. She is proud when it comes to money, not allowing anyone to pay for her schooling but herself, which she does through selling moth and butterfly collections, and through tutoring younger children about natural sciences. She also inherits her father's talent for the violin, which she practices in secret, away from her mother, who would have none of it. But she is not so good at keeping track of her money, and when it runs out, she turns to her mother for help. This was where I thought she had a weird switch from being the Good Girl to being a bit of a brat: her high school graduation requires not one but three new dresses, but instead of buying them, her mother washes last year's white dress for her. Oh, the horror! Cue the horrified cries of "I've got nothing to wear!" and the frantic clubbing together of other friendsandrelations to customise someone else's cast-offs instead. For someone so normally thrifty, it seemed very out of character for her to throw a tantrum about wearing one white dress instead of another, but perhaps I just don't understand the importance of having a brand-new outfit for high school graduation (or perhaps prom.) 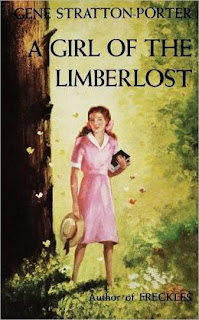 Elnora spends that summer working with a sickly young man called Philip Ammon, and they become close friends. He is engaged to another woman, a great beauty, but conveniently one who is an utter harridan, and who breaks off their engagement out of jealousy over Elnora, in front of all their friends and family. Elnora, it is implied, has developed feelings for Ammon, and as soon as his fiancee breaks up with him, he comes running back to Elnora. I didn't have a lot of patience for Ammon, finding him a bit of a drip. Like Romeo - and I don't mean that as a compliment; remember how Romeo mopes over the loss of his true love Rosaline at the beginning of the play, only to fall straight into the arms of someone he's only just met? But Elnora has more sense than to take Ammon at his word, and insists on giving him space to see if he really is over his first love. But he plays the persistent lover, which I'm not so sure is so romantic as it is intended to be. When he proposes formally to Elnora later on, her response is essentially, "Ooh, a ring, shiny! Let me try it on and see if I like it before I decide whether or not to marry you." Um... not quite sure that's a great basis on whether to marry someone or not. The whole romance element to the story is rather melodramatic and silly. A Girl of the Limberlost is not quite up there in the classic girls' coming-of-age canon with Anne, Katy and the March girls, but it is a good contemporary of them to keep them company.
Posted by Katie Edwards at 19:42