Be A Good Human (part one)

I wrote this post in response to Jen Campbell's video, in which she revealed some of the ridiculously ignorant, thoughtless and cruel comments she regularly hears about the condition she has called ectrodactyly, meaning that her hands don't look quite like everyone else's. What is wrong with people? In what tiny, self-contained world is it acceptable to make personal remarks to and about a complete stranger. It's utterly gobsmacking.

Ignorance is bad, books are good. Books educate and enlighten, this is why books are important. They take you out of your own mind, and show you what it might be like to live a different life, with different struggles and triumphs in different circumstances. And yet, invariably, you find a common humanity in each life, fictional or biographical. So Jen created the Be A Good Human tag, for vloggers and bloggers to celebrate those books which we think help you become you a better person in one way or another. I ended up with such a long post that I've split it into two parts; part two will appear tomorrow morning. Where I've reviewed the book previously, I've linked to it in the title, and quoted from my review in italics. 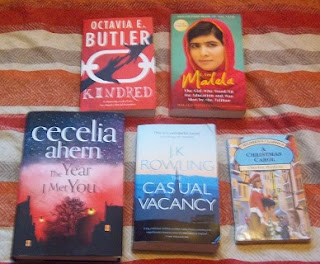 Although Kindred's plot relies upon time-travel, it is more historical than science fiction, taking a black woman out of the 1970s and sending her to a Maryland plantation of the early 19th century. This narrative means that it's impossible to view the past as a dim and distant country unconnected to the world as we know it, and poses some uncomfortable questions about humanity and morality.


"He wasn't a monster at all. Just an ordinary man who sometimes did the monstrous things his society said were legal and proper."

I wonder. From twenty-first century England I'd shout YOU KNOW BETTER, RUFUS! IN YOUR HEART, YOU KNOW RIGHT FROM WRONG. At the same time, I found myself questioning myself. Are we born with a conscience, or do we learn it from our social context? Even at my most conservative and suggestible, I could never talk myself into accepting everything I was taught. I like to think that I would be a decent person even if I lived as a white middle-class person in the American South in the 1800s, but I wonder, and part of me is afraid to find out. I hope at a bare minimum I would hang onto the truth Terry Pratchett's witch Granny Weatherwax summarises as"Sin... is when you treat people as things."

I Am Malala - Malala Yousafzai (with Christina Lamb)


More than just a memoir, this book helps you to understand not just what it is like to live under threat from the Taliban, but also the social, historical and political context that allows extremism to take hold. Malala is intelligent and passionate about the importance of universal education, demonstrating the harm done by ignorance, her frustration with those who would warp her religion to make it a tool for oppression. A powerful read from an extraordinary young woman.

The Year I Met You - Cecelia Ahern

This book struck a chord with me when I identified with some of the heroine's less heroic traits: Jasmine is judgemental, somewhat misanthropic, and highly opinionated. The "You" of the title is Matt, a radio DJ, who Jasmine despises for his controversial show which relies on people's bigotry to make for "entertaining" discussions. He is also a lousy husband and father, and unpleasant neighbour, regularly driving home at stupid o'clock in the morning and making a scene. But along with Jasmine, we come to recognise that even unpleasant people are human too, and they'll never change if you write them off as irredeemable. Both Matt and Jasmine learn from the enmity that turns to friendship over the course of a year. There is also a moving and thoughtful subplot about Jasmine's relationship with her beloved sister Heather, who has Down's Syndrome.

Sometimes we learn what being a good human is by seeing examples of what it is not. J.K. Rowling's first novel for adults shows a seemingly idyllic community destroying itself in the run-up to a local council election, with the comfortable middle-class residents forced to confront that which they'd rather not acknowledge: the existence of the poor, the broken, the vulnerable, living in their midst and imposing on their self-satisfied worldviews.


The Casual Vacancy burns with an anger, a passionate call for justice for the social outcasts comparable to Dickens at his strongest: an exposure of hypocrisy, prejudice and complacency and forcing us to look at People Like That as human beings. If we can write off the poor as being only responsible for their own predicament, then it spares us the need for uncomfortable compassion. Rowling challenges us to ask ourselves: what right do we as humans have to give up on our fellow-creatures? How dare we?

It irritates me a little when people call each other "Scrooge" if someone shows signs of not liking the sparkle and commercialism that comes with Christmas. That, to me, is missing the point of A Christmas Carol. Scrooge's sin is not that he doesn't like to have a good time, or is a party pooper, but that he has no compassion for his fellow humans. Christmas is not important because of the presents or the food or the carol-singing, but, as Scrooge's nephew puts it, it is "a kind, forgiving, charitable, pleasant time; the only time I know of, in the long calendar of the year, when men and women seem by one consent to open their shut-up hearts freely, and to think of the people below them as if they really were fellow-passengers to the grave, and not another race of creatures bound on other journeys. And therfore, uncle, though it has never put a scrap of gold or silver in my pocket, I believe that it has done me good, and will do me good; and I say, God bless it." This is the message Ebeneezer Scrooge learns from the three spirits of Christmas past, present and future, and this is what he resolves to remember by keeping Christmas all year round.
Posted by Katie Edwards at 09:00

Labels: be a good human