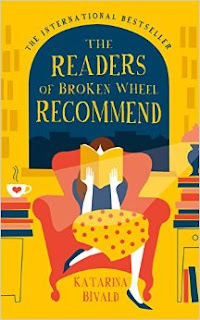 I went back to Surbiton last weekend, and while I was waiting to meet a friend, I had a look in the Regency Bookshop. I am ashamed to admit that, although I lived ten or fifteen minutes' walk away for two years, I rarely shopped there as a student. I don't know if it intimidated me a bit, or if it was simply that I overlooked it in favour of the 3 for 2 or Buy One Get One Half Price offers in the chain stores. I have since become more picky in what I buy, which has helped me to realise the value of books, that a good book in a good bookshop is worth paying the full retail price for. While I was in there this time, my eye was caught by a bright, cheerful hardback, which I had never heard of before, but before I'd finished reading the cover blurb I had decided instantly to buy it; The Readers of Broken Wheel Recommend was the perfect book to buy to make amends for my former neglect of the Regency Bookshop; a book-lover's dream.

Sara Lindqvist is a shy young Swedish woman, for whom life is something to read about in the pages of her beloved books. She has few close relationships, but has started up a pen-friendship with Amy, an elderly woman from Broken Wheel, Iowa. When Sara plucks up the courage to fly out to visit Amy, she is greeted by the sad news that Amy has died. Broken Wheel is a tiny town - a village, really - in the middle of nowhere, and it is little more than a ghost town now. But its people are kind, in their way, and they take Sara to their heart. And Sara decides that the thing she can do for them is to open a bookshop in town. Books make everything better, right? The people of Broken Wheel are not really a literary sort, but they support her in her venture, and in her cosy little shop, she pairs customers up with a carefully-chosen book. But Sara is only in America on a tourist's visa, and shouldn't really be working at all. As her time begins to run out, both she and her new friends realise that they don't want her to leave. So they come up with a plan...

There is something really special about a book about books. The Readers of Broken Wheel Recommend is like settling down in a personalised, cosy bookshop with a comfy chair, all the time you need, and good friends to rave to about your latest read. It is, as you might expect, full of references to familiar stories and authors, and not just the classics to make you feel smart for recognising the reference. This is just as much a love letter to Sophie Kinsella, Terry Pratchett and Bridget Jones's Diary as it is to Jane Eyre or Pride and Prejudice. (And Anne gets a mention too, so even if I hadn't been won over before - I was - I would recognise this book as being a Kindred Spirit.)

As a small town, we get to know a few characters really well. There is George, a recovering alcoholic and a divorcee who just longs to see his daughter again. Grace, the latest in a long line of tough, strong, contrary women called Grace (though that isn't her real name at all.) Andy and Carl, who own the bar, the vicar, William, who is called to be all things to all people, and Caroline, the stern, disapproving church member who carries the same sorrows and fears as everyone else, hidden behind her stuffy exterior. And Tom; Amy's nephew, who everyone thinks would be such a perfect match for Sara, even if he doesn't seem to like her at all. It is a real joy to meet these characters, watch as their lives unfold, and see them won over to the pleasure of reading. Sara's venture really seems to breathe new life into this tired old community, which is falling to pieces, but is not ready to give up just yet.

Unfortunately, the story gets a bit weaker towards the end, with the introduction of a romance plot, which felt more like infatuation than a real relationship, and I felt that the ending was too neatly tied up, and somewhat implausible. Also, I couldn't help noticing a few basic proof-reading errors, most notably the spelling of George's daughter's name, which was sometimes Sophie and sometimes Sophy, many times both spellings on the same page! But none of this detracts from the fact that The Readers of Broken Wheel Recommend is a really happy, feel-good book, with lovable characters and a setting so vivid I just need to close my eyes and imagine myself there.
Posted by Katie Edwards at 10:00