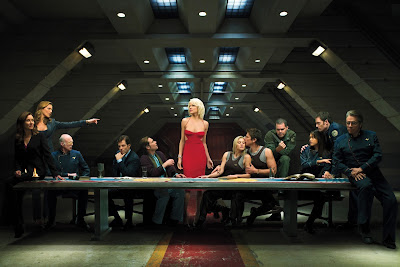 The Cylons were created by Man. They evolved. They rebelled. There are many copies. And they have a plan.

The miniseries that served as a pilot episode for the reimagined Battlestar Galactica showed the human race all but annihilated in a sudden, shocking nuclear attack by their own creations, the Cylons. The twelve home planets of Kobol were rendered uninhabitable, and the fifty thousand survivors take to the skies in a desperate attempt to find a new place to settle and ensure humanity's survival. Their ultimate destination: a long-forgotten planet called Earth, settled, allegedly, by a thirteenth colony from the original Kobol. But no one knows where Earth can be found, and meanwhile the Cylons, not content with their victory, continue their relentless pursuit across the galaxy. Some Cylons even look human, and are hidden within the fleet, ignorant of their own nature.

So, a pretty grim, ruthless premise for a series, and such a situation calls for tough people. There is a wide cast of fascinating characters, complex and nuanced, heroes and cowards, compassionate and selfish, full of love and hatred, loyalty and treason, justice and revenge - and all these qualities often found in the same person! There are very few straightforward heroes and villains, and that is what makes the characters so interesting. I could write about so many of them: Lee "Apollo" Adama, Saul Tigh, Kara "Starbuck" Thrace, Sharon "Boomer" Valeri, but I'm going to focus on the two leaders: Commander (later Admiral) Bill Adama, and President Laura Roslin. I was suspicious of Adama when I first encountered him; a military man all his life, he seemed cold, angry, and proud. My first impressions of Roslin, on the other hand was that she was an absolute sweetie; a motherly former schoolteacher with a strong moral compass. I adored her.

This paragraph contains minor spoilers, more about character than plot. But feel free to scroll down to the black text. Meanwhile, though friends have proclaimed Whiny Gaius Baltar their favourite character, I could not stand him from first to last: a smug, snivelling coward with an overinflated ego. And yet, when he was pitted against our two heroes at the end of season three, I found myself gradually siding with him against them. Roslin and Adama's desire for justice became a hunger for revenge, and it was very ugly. I found myself furious with them. You're better than this! But I could not hate them for long. I gradually fell away from Roslin's spell during that season, felt less inclined to excuse her as a good person who made bad choices for good reasons. Yes, her ultimate goal remained the survival of humanity as a whole, and the search for Earth, but her moral compass was so unmovable it seemed glued in place: if someone disagreed with her, they were clearly wrong. And her concern for humanity as a species does not always extend to the individuals that make up that species. Meanwhile, Adama said and did some pretty awful things, and yet I found him easier to forgive, because beneath his hard military facade, you come to learn he is a man of strong but controlled emotions. And perhaps it is easier to excuse something said or done in the heat of a moment than a coldly considered cruelty. I did not hate Laura Roslin as a person - she remained lovable in her private moments - but she did not remain a likable president. A good one, nonetheless? The jury is out on that. Difficult decisions must be made, and sometimes there isn't a right choice. 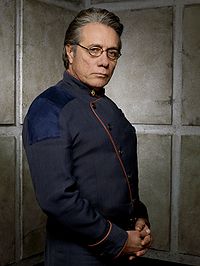 The road to Earth is far from straightfoward, and the fleet is constantly confronted by conflict from within as well as exterior forces - and not just from the Cylons living among the humans. When they start to be revealed, the humans struggle to reconcile their preconceptions with the evidence that confronts them. One must acknowledge the shared humanity of others - even some Cylons - lest you lose your own. Yet this is easier said than done when still reeling from the near-destruction of an entire civilisation.

The plots keep you guessing, and nothing is straightforward. Political intrigue, twists of prophecy, betrayal and the just plain weird make for an exhilarating experience. The plot does not go where you think it ought - and I love a story to be unpredictable. People die that shouldn't, others outlive all expectations, and even the music gets in on the act to scramble your brain. This is not a story that reverts to the status quo. The series finales come with game-changing shocks, and the season finale turns everything you think you know about the Battlestar Galactica universe on its head. It must be very different watching it a second time around.

It is not a perfect show, however. There is a strange mystical subplot that I could take or leave, if it were less critical to advancing events. Prophecies lead to strange McGuffin-hunts ("The arrow of Apollo will open the tomb of Athena which will lead us to Earth" - what?!) There are too many self-proclaimed "chosen ones" and too many answers are provided by dreams and visions, and just accepted to be accurate predictions of the future (and usually are, in some way.) This seems like weak plot progression to me. Prophecies, visions and dreams should be used lightly, I think - see the twist in Harry Potter and the Order of the Phoenix for an example of it done well. Also, I noticed there is a lot of repetition in the dialogue, and it sounds scripted rather than like real speech, sometimes even like poetry. And not good poetry, either.

But perhaps these are minor quibbles from one who has spent too long studying creative writing. Battlestar Galactica is a revolutionary space disaster adventure, and despite the irritations, I have thoroughly enjoyed watching it. It is a show best watched with very little foreknowledge, and I've enjoyed watching the mysteries unfold before being resolved in an epic climax. I know some of my Twitter followers have been reading my tweets with smug enjoyment of my ignorance (and one of my colleagues will be asking me tomorrow for my thoughts on the ending.) Definitely one to watch twice.
Posted by Katie Edwards at 21:52