I was lent The White Queen and The Red Queen by a colleague, and although they work well as stand-alone novels, I think they work best when read as a pair. After following the changing fortunes and loyalties of the House of York during the Wars of the Roses, it is interesting to witness the same era from the point of view of the enemy; the house of Tudor and of Lancaster. Through her Lancastrian characters, Gregory offers alternative interpretations of events and the motivations of the players. Those people we've come to know as friends, now become enemies, traitors, whose actions and motives become suspicious when seen from a distance.
We first meet Margaret Beaufort, the narrator and titular Red Queen, as a very young child. Margaret is a precocious child, strongly religious and very self-assured, convinced that God is calling her to be a nun. Her mother, however has other plans. Margaret is to marry into the Tudor family and bear a possible heir to the throne. She is a lonely girl, married at the age of twelve, a widowed mother at thirteen, and it is made quite clear to her that she is unloved. Despite her certainty - bordering on arrogance - that she is destined for greatness, her mother makes it quite clear that the only thing that Margaret can do that is of any importance whatsoever, is to give birth to the King of England. So, once she has accepted her lot, that is what Margaret will do. Her son will be king; he must. 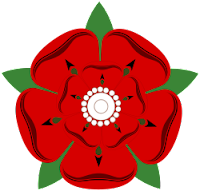 Philippa Gregory's novels are characterised by their depiction of strong women who have shaped history, but more often than not behind the scenes and neglected by historians. Both Margaret Beaufort and Elizabeth Woodville, the White Queen, are fiercely committed to their cause, ruthless and ambitious to the exclusion of all other concerns, sometimes more than the men. But while Elizabeth was fiery, driven by her love of her family and her need for vengeance on those who have harmed her and hers, Margaret's nature is cold and sometimes cruel. She is driven by her certainty that the throne is hers by right and that any means are justified by the end: not just for her good, or for the good of her house or even the country, but because it is divine will. I found Margaret to be an interesting, but unlikeable person, and once again I just wanted to cry, "Stop! How can it possibly be worth all the bloodshed?"
Posted by Katie Edwards at 15:28