When God Was A Rabbit, Sarah Winman 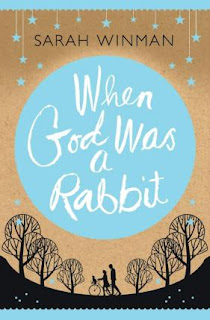 Thursday was the big launch of the latest chapter in the Richard and Judy Book Club: 2011’s Summer Reads. The first book to be selected, When God Was a Rabbit is the first novel of new author Sarah Winman, and is already sparking a lot of interest. With its strange title and attractive cover, When God Was A Rabbit is a charming, engaging family story told in two parts: “Not really a Before and After, more as if they are bookends.” Part one is set in the 1960s and 1970s, and is more character-based than a linear plot.

The story is viewed through the eyes of Elly as a young girl, with a slightly skewed viewpoint, and Winman highlights the ways that children view the world differently to adults. Although a “real world” book, there are one or two surreal scenes that leave you wondering whether they can be explained by an overactive imagination or if there is some magic in the air. It would spoil the poetry of the novel to think too hard about the question.

Winman excels in creating believable, loveable characters and it is them who kept me turning the pages: Elly’s adored elder brother Joe, Aunt Nancy who is in love with her sister-in-law, elderly eccentric Arthur (who reminded me a little of Edward Bloom in the film Big Fish) and Elly’s best schoolfriend Jenny Penny.

Jenny Penny is a charismatic, imaginative but rather highly-strung child, and I was curious because there is a character of the same name who features in L. M. Montgomery’s Anne of Ingleside. Both Jenny Pennys are appealing little girls with a huge influence on their schoolfellows and with a home life that doesn’t live up to its appearance. I wondered if Jenny Penny is some sort of fairy sprite who pops up in fiction throughout space and time – an unlikely theory perhaps! Winman’s Jenny Penny is a much more rounded, sympathetic character and friend than her namesake.

Part one is an anecdotal story that doesn’t seem to join together, rather like real life. Elly’s is a family with their quirks, ups and downs and guilty secrets, but who love each other above all. The story is fresh, magical and rather innocent, despite some of the themes and events. Powerful characterisation and poetic writing helps to make the ordinary extraordinary.

Part Two deliberately skips forward fifteen years, showing how people change when you’re not watching. In a more conventional novel, time may pass in smaller gaps with gradual characterisation, but here we see how different an old friend can be when you haven’t seen them for so long. Elly – and the reader – gains a new knowledge and understanding of what might have been going on in the lives of others, that as a child you saw very differently or didn’t see at all.

There is more of a linear plotline in the second half. Little insignificant or disconnected parts of childhood memories come to have more meaning and connection to each other. In childhood, one’s priorities can be mixed up, and factors that didn’t even merit a mention in part one, because they seemed to be just part of everyday life, are revealed to be far more significant and sinister.

And then, Elly receives a chilling message from Jenny Penny – a tarot card – that meant little to her but any reader would immediately interpret. I checked the date of Jenny’s letter. Yes.  At this point, the book becomes something else again. The strength of the characterisation and the reader’s own memories bring back to life the moment when everything changed. Recent history becomes real once more, and it is devastating.

When God Was a Rabbit has everything needed for a great read: beautiful writing, quirky but real characters who make you love them. I laughed and cried, and even when the plot didn’t seem to be going anywhere, Winham drew me into her world and I didn’t want to leave.

If you liked this, you may enjoy:

As with the last R&J book clubs, I’ll aim to read and review at least three more of the selected titles, which are listed below: