What Katie Did: a general update

This crazy, sprawling epic is set in and around a prestigious old boys' school and follows staff, students and other local characters in the events leading up to and following the death of Daniel "Skippy" Juster. Seemingly unconnected characters all had their own stories to tell, and gradually all came to fit together like the pieces of a jigsaw. Murray uses a mixture of unusual narrative techniques: alongside the ordinary third-person narration are chapters written in the second person - "you" - the first book I've read to use this, and stream-of-consciousness. Despite this, Skippy is quite intelligible, although some of the consciousnesses we see into are decidedly disturbing, horrible, twisted places. In the end, though, I couldn't be sure what to make of this book. There was so much going on, and it was so many different things: blackly comic, bleak, tragic, innocent and at the same time as obscene as only fourteen-year-old boys can be. Then, after the tragedy, shocking revelations come to light. Not shocking because of being unexpected - given the setting and date of writing, these secrets were almost inevitable - but due to the way they are handled, and because this didn't come from one man's twisted imagination but based upon reality.

I wouldn't recommend Skippy Dies to everyone, as it is horrible in places, and despite its humour in the first part, I reached the end with an impression of disgust and despair. Still, it is an interesting, sometimes amusing, sometimes tragic interesting, well-written and thought-provoking piece of work.

What Katie Watched: Glee and Doctor Who 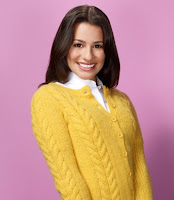 Once again, I'm late to the party. I tried to avoid the phenomenon of being the last person to discover a new story/band/TV show, but after watching the first two episodes, predicting an adultery storyline and misinterpreting a throwaway line as being much filthier than it actually was, I wasn't too impressed. Then I tried again for season two and got myself hooked, and ended up renting series 1 from Blockbuster to catch up. I've always had a thing about school stories, and the American High School of TV and film seems such a more glamorous, story-worthy place than the bog-standard 13-18 comprehensive I attended. I guess the grass is always greener. Interesting to notice that the American preppie style of fashion seems to be the in thing at the moment. TopShop, H&M, et al are full of High school style sports jackets, short red cheerleading-type skirts and anything out of Rachel Berry's wardrobe, such as polka-dot blouses with cute little rounded collars. The latest series of Doctor Who opened with a huge two-part story that is comparable to most seasons' finales. Ten minutes in, spmething unthinkable happened, and I was in denial. But due to the laws of timey-wimey and Steven Moffat's magnificant brain, there are still many, many unanswered questions of "what happens next?" and "what happened to lead up to this point?" Unfortunately, it's hard to follow up on such an opener, and stand-alone episodes that would be great in an ordinary season just seem to fall a bit flat, when what you really care about is the big story arc. However, last week's episode, "The Doctor's Wife" was written by Neil Gaiman, and what a cracking story it was! Full of Gaiman's trademark humour and horror, we get a new point of view on the Doctor's life story. I could tell Gaiman was a fan of both old series and new, and although some people complained that the title was "misleading" (which it was) I thought that it was perfect, its meaning perfect and in fact I had predicted the identity of "The Doctor's Wife" as a "mad crazy theory" the day before, after picking up on a clue from the previous episode.

What Katie Listened To: Rumours by Fleetwood Mac


Just before Spotify changed The Rules to limit how often one can listen to music for free, I had this album pretty much on repeat, so I was thrilled to see Glee dedicating an episode to this album, causing me to buy it for myself. The album tells the real-life story of the band's relationship breakdowns - with each other! - but instead of letting their emotions break up the group, they turned them into some amazing music. Go Your Own Way, Second Hand News and Songbird are my favourites at the moment, but the other tracks follow close behind, and I'm sure they are liable to change.
What Katie Planned:

I've got a much-needed week of holiday from work, in which I intend to spend a lot of my time catching up on my reading. Since my Lent book-buying embargo, I've added some half dozen or so books to my collection as well as a few borrowings from libraries and friends.
﻿

Currently I'm reading The Woodcutter, a crime thriller by Reginald Hill who wrote the Dalziel and Pascoe detective novels. So far, it is remarkably different from the run-of-the-mill mystery I was expecting to read, and is the second book in a row to feature at least some second-person narration - unusual. Hodder books sent me Cold Light by Jenn Ashworth to review, so that will appear online in the next week or two, as will part two of Whitney's Tenant of Wildfell Hall read-along.
On Thursday I'm off to the theatre to watch some Shakespeare: Much Ado About Nothing starring the wonderful pairing of David Tennant and Catherine Tate as Benedick and Beatrice. I absolutely cannot wait.
Posted by Katie Edwards at 21:45