Theatre: Much Ado About Nothing (Wyndham's) 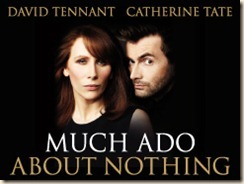 One cold day in January I was mooching around my room, probably reading or using my laptop, when all of a sudden my ears tuned into the radio news: “David Tennant and Catherine Tate are to be reunited on stage, playing sparring lovers Benedick and Beatrice in Shakespeare’s comedy Much Ado About Nothing…” I confess, I actually squealed and did a little happydance. Much Ado About Nothing wasn’t a Shakespeare play I’d seen or read before, but I’d heard a little about it. When I told my dad, who had studied the play at O-Level, he knew immediately which roles they had been cast in. The characters seemed to have been written for the duo. (Perhaps they were…)

﻿But, strange as it seemed, it didn’t occur to me for a few hours that I could actually see the play. Once that lightbulb lit up, I was on the internet, but so was everyone else, so I tried the phones. Lots of twinkly music later, I decided to give myself another two minutes. Two minutes passed, and then… a person! And I had tickets! And I was one excited bunny.

After many months of waiting, the day came around. My best friend and I had decided to wear nice dresses and stay in a hotel overnight – but just before we got to the hotel, the heavens opened! It looked like we would have to reconsider. My shoes were little more than ballet slippers, not good for splashing through puddles. With a few minutes to go, the rain stopped and we decided to risk it. But as we stood on the station platform, it seemed we had made a bad choice. Rain emptied down once more, and the sky exploded into a thunderstorm. Oh dear. Instead of heading to Foyle’s – the wonderful bookshop up the road from the Wyndham’s Theatre, and grabbing a bite to eat in Leicester Square, we grabbed some food at the station and took the tube straight to the station. We arrived with about ten minutes to go before the doors opened, just enough time to eat our food. And then – we were there! 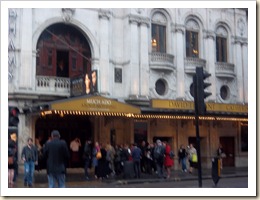 I had been worrying that something would go wrong - surely it was too good to be true? - but we were ushered in without a problem, and made our way into the stalls. Entering the theatre, I was shocked that it was a lot smaller than I had been expecting. We were six rows back from the stage, and on the end of the row – but the rows were fairly short meaning we got a fantastic view. 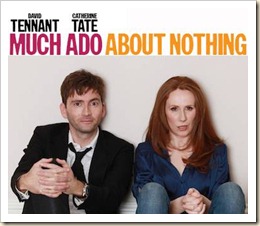 Much Ado About Nothing is the tale of two couples: young Claudio and Hero, whose love is tested by the evil Don John’s lies, and the older Benedick and Beatrice whose relationship consists of trading insults, and whose friends think it would be a laugh if they could be persuaded to fall in love with each other.
This production was updated to a 1980s setting, with its location Messina being translated to being a bit of a party island. Lyrics from Shakespeare’s songs – not only from this play – were set to a variety of ‘80s-style pop and rock arrangements, for both drama and soundtrack. I've had the finale number, "Sigh No More, Ladies, Sigh No More," in my head all day.

Though perhaps Claudio and Hero are supposed to be the “main” couple and provide the most drama, it is the older couple who are the real stars. It seems that Benedick fancies himself as a wit, and a bit of a ladies’ man, but the sharp-tongued Beatrice is more than a match for him. Catherine Tate plays the role pretty much as her fans expect: tomboyish and mouthy and seemingly with more anger in her words than the smart-ass of a Benedick. Seeing her in the role makes you aware of what a modern, interesting character Beatrice is, and I had the impression that she was bitter about the expectations of her sex, battling with her tongue when denied a sword. Tate and Tennant’s banter was perfect, a sort of verbal Wimbledon Final match between pros, although the dialogue was not always audible over the audience’s laughter.

Need I point out that David Tennant was superb? Such a versatile actor, hilarious both in his delivery of his lines, and in his unspoken acting, quietly frightening when angry – I would not want to be on the receiving end of that stony glare – and charming when Benedick finally confesses his love for Beatrice. And, worryingly, he looks better in a mini-skirt and lace tights than I ever would. Perhaps.

Hero was played by West End newcomer Sarah Macrae, who did a great job of playing the pretty, innocent love interest caught in the middle of Don John’s scheming. As the drama came to a head at their wedding ceremony, I found myself glowering at the unkind Claudio, and most of Hero’s friends-and-relations who were so quick to condemn her. Still, Tom Bateman managed to evoke a little sympathy for Claudio in times, once he’d realised his mistake – although shame on Hero for taking him back without question!

The best scenes for me were without doubt those in which Benedick, and later Beatrice, overhear their friends discussing the other’s love for them. After some brilliantly staged slapstick moments, Tennant ended up with paint all over his face, and Tate found herself dangling from the ceiling, trying to assault the gossipers. Benedick's attempts at songwriting with the aid of a little plastic keyboard were brilliant, as was his lack of control over said instrument when interrupted mid-ballad. Hero’s wedding dress also amused me - being set in the 1980s, it was of course a Princess Diana-inspired beast with a ridiculous train, which Beatrice proceeded to wrap herself up in when suffering from a mysterious disease causing her to sneeze at the word “Benedick.” The dress also gave a double meaning to the comparison of Hero with “Diane in her orb.”

Note also needs to be made of John Ramm as the watchman Dogberry, who reminded me very much of Sergeant Colon of Ankh-Morpork, and let me not forget to note that he is an ass!

When I was at school, first studying Shakespeare, I was informed that his comedies are defined by ending in weddings, and the tragedies by ending with a stage full of corpses, but it took quite some time to understand that Shakespeare’s comedies are actually funny! This production made no doubts about that, with a superb cast delivering a witty script so as to cause louder laughter than you may expect if you expect Shakespeare to be “boring, cultural stuff that no one actually understands.” Yet I was drawn emotionally into the play too, feeling anger and pity for those wronged by the villain Don John and rejoicing in a happy – if contrived – ending (if happy it can be for poor Hero marrying the awful Claudio.) The play received a standing ovation, and the cast seemed to really enjoy performing it.

After the show, I took a detour round the back of the theatre “just in case” any of the cast decided to make an appearance at the stage door – which they did. Although not as big a crowd of fangirls – for most people I saw were female and between about 16 and 25! – as I could have predicted, I didn’t manage to speak to Mr Tennant or Ms Tate, or get an autograph. It would have been nice, of course, but it was too busy for an autograph to be more than a squiggle on a programme anyway. I didn’t want to be a demanding fangirl shouting “David! Over here! Catherine! Sign this!” But I’d have liked to thank them personally - and say, "Nice tights!" Still, I saw them up close, close enough to touch if it weren’t for the crowd. Miss Tate has glorious hair. In the flesh, Mr Tennant is very tall and very skinny but looks remarkably ordinary - if a rather eye-pleasing ordinary who looks like David Tennant! 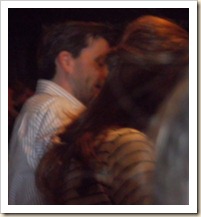 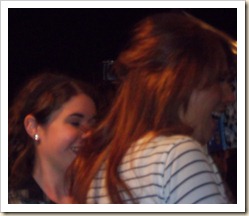