My blog has been on holiday, but never fear, dear readers, it is home once more, suntanned and rested and getting into the Christmas spirit. I have tinsel and fairy lights up, spiced apple scented candles and have been merrily mulling the wine. Yes, it is only the first day of December, but I've a busy month coming up at work, and with this week being the last week off before Christmas, I've been counting this as my Christmas holiday.

So, what have I been doing?

At the beginning of November I went to visit friendsandrelations in the London area. While up there, I took the tube up to Highgate, where I popped into a lovely little second-hand bookshop where I met fellow blogger Jen Campbell, author of forthcoming book Weird Things Customers Say in Bookshops. I visited her the day before she embarked upon her 100-poem-writing weekend to raise money for medical research. It was quiet in the shop, so we chatted a little about the perils of bookselling, and I asked her for some recommendations. Jen flittered around the shop like a bumblebee, pulling book after book off the shelves until I ended up with a decent-sized pile.

After saying goodbye and good luck for her poetry event, I wandered over to Highgate Cemetary. It wasn't open to the general public, but I whispered "Hello Bod" through the gates, and went for a walk in the park opposite. It was a dull, grey day, but the yellowish grass and golden-bronze trees set against the overcast sky had a beauty of its own. There was a dry chill in the air, which seemed to be the only weather to illustrate this iconic ghost-story setting. 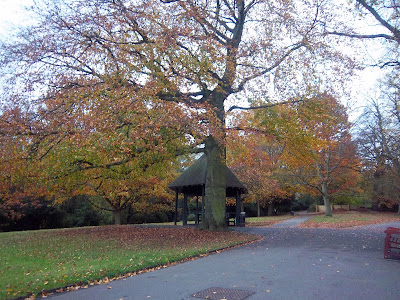 I also took this month off from blogging in order to focus on NaNoWriMo: National Novel Writing Month. Now, I will confess here and now that I didn't do it "properly" by starting a brand-new novel on the 1st November, but picked up an old story I began when I was a student, continued for NaNoWriMo 2009, and added to again this year. It's a werewolf novel which started life as a creative writing exercise and has evolved so much in the last five or six years that if you were to sit down and read it from start to finish - if it had a finish, which it still doesn't - it probably would not make any sense at all. I've no plans for publication, but it is amazing how cathartic it can be to write about werewolves, and it's keeping my imagination working and my fingers typing.

I did not "win" by reaching 50 000 words in a month, but I don't count myself as having failed either, with 32 000 words added to my story. And, for the first time, I can see my way towards an ending.

Where has my reading taken me this month?

I've been to prep school, Oxford and Austria with a narrator very like Stephen Fry in his first novel The Liar.
I've been on a treasure hunt around Manhatten with Kendra and Oscar Kaye and Frank Lee - Remember Me to Harold Square by Paula Danziger.
I've revisited a creepy old boarding school in the middle of nowhere with just four pupils - Down a Dark Hall, Lois Duncan
I've stayed in an old, run-down manor house in the years leading up to the First World War, with a horse-mad family, and the black sheep, Will, whose one love is aeroplanes. Flambards, The Edge of the Clouds, Flambards in Summer - K. M. Peyton
I've lived near Chicago with two boys named Will Grayson. Will Grayson, Will Grayson - John Green and David Levithan
Finally, I've spent time in Ireland with Lucy Silchester and the personification of her Life - Time of my Life, Cecelia Ahern.

I started The Night Circus in October, but for one reason or another I still haven't got very far with it - probably because, being a hardback, I've not been able to fit it into my handbag, and therefore smaller books have taken precedence over it. I'm enjoying it, but taking it very slowly.

I've been buying books galore this past month - so much for my resolution to work my way down my to-read pile! Now we're in December, it's time to break out the old favourites, but there just aren't the hours in the day, and working full-time in retail in the run-up to Christmas means that I predict I will spend much of my designated reading time asleep. If only I could employ David Tennant, Alan Rickman, Stephen Fry and Benedict Cumberbatch to take turns in reading to me...

Anyway, here are my November acquisitions:

What I've been watching:

Since Downton Abbey has come to an end, I haven't had anything to watch on TV, but I rectified a long-standing issue: I had never seen Four Weddings and a Funeral, or Love Actually. Four Weddings left me quite cold: it was a nice enough story, but quite thin, what it said on the tin, really: four weddings, one funeral, a love story. "My mind's made up by the way that I feel" indeed! Great basis for a relationship. On the other hand, I was expecting Love Actually to be much the same. - I don't do mushy stuff - but felt my hard heart turn into a pink fluffy marshmallow within the first five minutes. I loved it, and it will be added to my pile of Christmassy must-sees, taking my chick-flick collection up to three DVDs.

What's coming soon on this blog:

I've been using this week off work to prepare a series on "The Twelve Bookish Days of Christmas," in which I will be sharing my thoughts on my favourite festive scenes and novels. Most of these are childhood favourites that are revisited every year. I also intend to write a season Movie Monday post on the films that make Christmas, and of course some book reviews.
Posted by Katie Edwards at 13:53