Twelve Days of Christmas 2: Treasures of the Snow 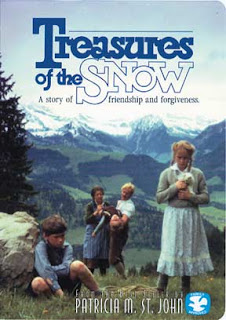 I received Treasures of the Snow by Patricia St John as a Sunday School prize when I was about 6 or 7 years old. It reminds me a lot of Heidi due to its setting and some of its themes, a tale of anger, friendship and forgiveness between two children, Annette and Lucien. With its Swiss mountainous setting, the entire book is a lovely read for the winter months, but it is the opening chapter, before any tragedy starts, that earns its place in my Twelve Days of Christmas series: two children walking home up the mountain from the Christmas Eve church service with gingerbread bears in their hands - and in Lucien's case, his tummy! There is a tone of magic and awe as Annette reflects upon the nativity scene, which is paralleled by her family's own cattle shed, and her arrival home to discover that she had a new baby brother.


The house was very, very still, and the Christmas star shone in through the unshuttered windows. So it had shone on that other Christmas Baby in the stable at Bethlehem, and so had Mary sat and watched God's little Son, just as [Annette] was sitting by the stove watching little brother.

She put out reverent fingures and touched the top of his downy head, which was all she could see of him. Then with a tired sigh she leaned her head against the cradle and let her fancy roam where it would - stars. shepherds, new little babies, shut doors, wise men and gingerbread bears - they all became muddled up in her mind, and she slid gradually on to the floor.

Sadly, the magic does not last long, as, little does Annette know that her mother did not survive long after giving birth, and her brother Dani becomes her own responsibility. It is a long, difficult road for all three children before they find their happy ending.
Posted by Katie Edwards at 08:00