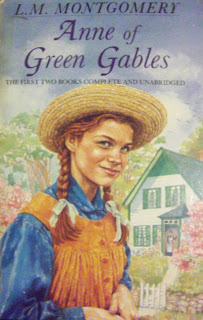 As I described earlier in the year when rereading the Anne of Green Gables series for my Kindred Spirit challenge, my childhood reading experiences were so vivid that sometimes they seem almost indistinguishable from my real-life experiences. I'm sure that my character was partly influenced by precocious orphan Anne Shirley, who I could identify more with than any other character I had encountered in either fiction or real life. I couldn't tell you what it was like to be a child in the early 1990s, because as far as I was concerned I grew up in 19th century Canada, 1940s rural England, on the Prairies... wherever my reading and imagination took me.

If you were to ask Anne Shirley what her most memorable Christmas present was, no doubt she would tell you about the dress bought for her by Matthew Cuthbert the Christmas before she turned thirteen. Her childhood before then was one of poverty and neglect, reluctantly taken in by one family after another, before being dropped off in an orphanage. A bright, dreamy girl with a love of all things beautiful, it was only Anne's imagination that resigned her to wearing the shabby, second-hand clothes of ugly material provided by the orphanage. Being adopted by two middle-aged people who knew nothing of children was her first taste of real happiness. Shy Matthew adored her, his sister Marilla was less demonstative, but under her stiff exterior, she too came to love Anne. But as far as Marilla was concerned, pretty clothes were frivolous and encouraged vanity, and she insisted in dressing Anne in plain ginghams and prints without any room for flounces or fashions - or puffed sleeves, Anne's biggest dream. 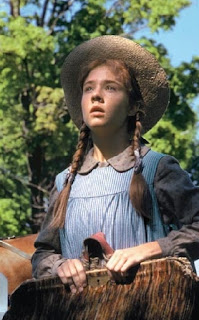 If you were to ask Matthew how he came to be an expert in dresses for teenage girls, he would probably scurry away like a frightened rabbit. Buying the dress that Anne set her heart on was not an easy feat for him, because he was terrified of all women except his sister, neighbour Rachel Lynde, who he tolerated, and lately Anne, the apple of his eye. When he arrived at the store to be greeted by a new - female - shop assistant, he could not bring himself to ask for dress material for his ward, instead making himself look even stranger by requesting hayseed and a rake - in winter! - and enough sugar to open a toffee factory. If it was good sugar, which it wasn't. It's a wonder that dress ever came into being. But ask Matthew if Anne's joy made it all worthwhile, and his eyes would tell it all.

"That's a Christmas present for you," said Matthew shyly. "Why - why - Anne, don't you like it? Well now - well now."
For Anne's eyes had suddenly filled with tears.
"Like it! Oh Matthew!" Anne laid the dress over a chair and clasped her hands. "Matthew, it's perfectly exquisite. Oh, I can never thank you enough. Look at those sleeves! Oh, it seems to me this must be a happy dream." 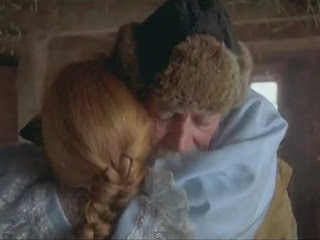