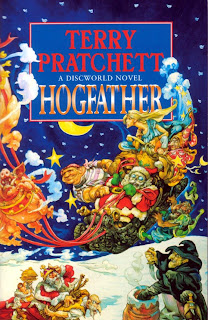 There haven't been many subjects that Terry Pratchett hasn't taken from the round world, taken to his Discworld and examined from an odd angle so that what you think you know all about, looks very different all of a sudden. So it was inevitable that Christmas would get the Discworld treatment, and that it would be both festive and strange at the same time. When Sky One adapted Hogfather into a two-part drama a few years ago, seeing it on the big screen made me think that if I was not already a Discworld fan I would think it a bit dark and scary in its surrealism. Father Christmas is a skeleton in a sleigh pulled by pigs? How is that in any way not creepy? Oh, and not just any skeleton but the Grim Reaper, Death himself? How - how - is this in any way okay?

Of course, I am a Discworld fan, and know full well that Death is nothing if not a big softie. It's not until seeing Hogfather through a newcomer's eyes that I even thought twice about the weirdness. But though a bit odd, it's not dark or creepy at all, and once you get into the story, you soon forget about the things that seem to be all-wrong. The Hogfather - Discworld's version of Father Christmas - is missing, and if his job is not done, disaster will strike. People are stopping believing in the Hogfather, and the spare belief is bringing all sorts of strange beings into existance, and if people don't believe in the Hogfather, the sun will not rise.

Yet for all its weirdness, Hogfather, with Death, assassins, tooth fairies and bogeymen, is as seasonal as you can get (with plenty that is jolly, with holly, and other things rhyming with "olly.") Examining the importance of faith and belief and the traditions we just take for granted, with lots of bad punes, or plays on words, and snarky wit from Death's granddaughter Susan, along the way, Hogfather has earned its way in the Christmas canon alongside the classics featured in the Twelve Days of Christmas. And the TV adaptation is a must-see! 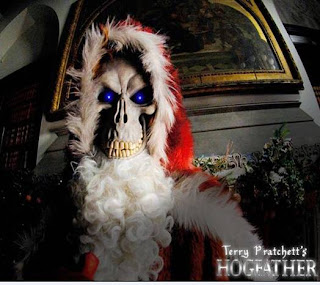