As you can see, many of my Christmas must-reads are childhood favourites, books that have been a part of my life since primary school. Many of Enid Blyton's Famous Five series are fairly generic - the woman did write more adventure stories than most people read in their lives! - but Five Go Adventuring, the second book in the series, is one of my favourites, even now. 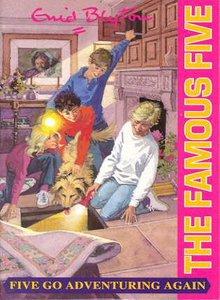 Set at Christmas time, when we are still getting to know the characters, Julian, Dick and George are required to take extra coaching in the school holidays, and Uncle Quentin has hired a tutor for them. George doesn't trust him - he doesn't like dogs, you see, and her faithful dog Timmy doesn't like him! And he will insist on calling her Georgina! But her cousins think Mr Roland is wonderful, can't do a thing wrong, and wish she would just buck up and be decent and not spoil Christmas. And for Christmas day, at least, she tries - and there are lovely scenes, describing the family's presents to each other and Anne's joy at being given the fairy doll from the tree. I don't recall seeing any other Christmasses depicted in Blyton, though with hundreds of books to her name there must be some.

The quintette spend a lot of time over at the nearby farmhouse, which, it is rumoured, contains all sorts of secret tunnels and cubby-holes. I'm sure that when I wasn't checking my wardrobe for an entry into Narnia, I used to hope fervently for a false back that was also a door into a secret passageway! Alas, there was none. They find a map, with coded hints to other passageways, and the solving of this mystery appealed, and still appeals, to my inquisitive imagination. When valuable papers are stolen from Uncle Quentin's study, and there seems no way to track the thieves due to the house being snowed up, the secrets of the map become very helpful indeed!
Posted by Katie Edwards at 08:00