After the Fall - Charity Norman 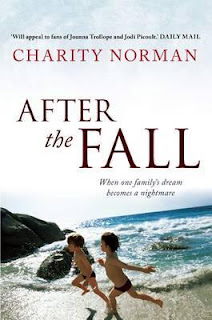 One year ago, the McNamara family left their home in England to start a new life in New Zealand. It seemed the perfect opportunity for a fresh start, but one year later, all is not well. Five-year-old Finn lies comatose after falling from a balcony, and his mother is unforthcoming about what really happened to him. After The Fall switches between the past and the present to tell the story of what led up to the accident.

There are five members of the McNamara family: husband Kit, an artist who struggles from time to time with depression and drink; wife Martha, apparently running from secrets in her own past; Martha's daughter Sacha, aged sixteen, reluctant to leave her school, friends and life in England to move to the other side of the world, and five-year-old twins Finn and Charlie, for whom the entire experience is nothing but an adventure. The descriptions of the family uprooting themselves to start a new life caused an ache of longing inside me, aided by the beautiful descriptions of the New Zealand landscape and culture, the Maori folklore whose presence in the novel colours events with an eerie, unearthly atmosphere. But no matter how beautiful the McNamaras' new home is, no matter how far away from their old life, they can't run away from the darkness lurking beneath the surface of the family, because they brought it with them.

I was slow to really connect with this novel, despite sharing the desire to start life all over again in New Zealand or Australia, because of this darkness. Though superficially Martha and Kit appeared fairly likable, there was a menace in the writing, in the contrast between the flashback scenes and the present day in which the little boy was in hospital. The question was: how did they come to this? Hints throughout the book kept me distanced from Martha and Kit, feeling a reluctant certainty of the way that the plot would develop. Kit would lapse into alcoholism, become violent, and Martha would have an affair with the handsome shepherd who lived nearby, culminating in a horrible confrontation on the balcony which would leave me without sympathy for either and injuring an innocent child. I pretty much have a zero-tolerance policy regarding adultery in fiction. I was side-eyeing Martha all the way through the novel, preparing myself to dislike her intensely, while, against all hope, willing the author to surprise me.

So when the dark secrecy was uncovered, and it had nothing to do with the above predictions, it was all the more powerful for being unforeseen. The revelation was heartbreaking and shocking, coming from a character who I had allowed myself to feel sympathy for. Congratulations to Ms Norman for the genuine twist, and for getting past the emotional defenses I had put up between myself and the main couple.

After The Fall turned out to be a powerful exploration of families and secrets, and the futility of running from the past, at times difficult and upsetting, but ultimately hopeful.