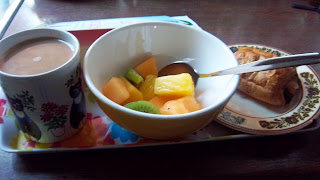 I said that I would be writing my daily Bout of Books blog posts in the evenings, but I thought I might as well start early on my first day. Besides, today and tomorrow I don't start work until 9, (as opposed to my usual 8.30) which gives me an extra half hour sleep reading time over breakfast (fruit salad, a pain au chocolat and, of course, the fuel on which I run: a mug of coffee.)

Karen Thompson Walker's The Age of Miracles caught my eye when it was first published in hardback, but I decided to wait until the paperback release.

It's interesting to compare the marketing of the book between the original release and its paperback publication. It was published around the same time as Terry Pratchett and Stephen Baxter's The Long Earth, and I found the covers similar, which may have influenced my perception of the book as hard science fiction. Though the paperback cover is not actually that drastically different from the hardback, its new design gives it more of a feeling of a "women's literary fiction" novel with a twist of not-quite realism. Perhaps the fact that it has been chosen by Richard and Judy for their book club has had something to do with this: they seem to choose very specific genres of books, and this seems to have been slotted into the Jodi Picoult/Lovely Bones category. The focus has shifted from the strange phenomenon threatening the earth as we know it - hinted at in the flare at the centre of the hardback image - to the child, representing the more intimate crisis at the centre of one family. The crispness of the colours, the change in typeface, even the buildings in the background, have changed subtly but enough to give a very different first impression of the novel.

But onto the story. I'm just a few pages in so far. The news has just been announced that the earth's rotation is slowing down, and mass panic has broken out, which we see in the mother of eleven-year-old narrator Julia. I wonder whether that's a realistic reaction to a weird scientific phenomenon? I would have thought it more likely that people would be quietly a little freaked, but be slow to really grasp the implications of what's happening. They haven't actually noticed anything different until the change was pointed out, and can't really see how it affects them, so business as usual. None of this panic-buying at the supermarkets and staying home taking cover under the kitchen table nonsense!

But then, I am British.

It seems I misjudged the suddenness of the earth's slowing in Age of Miracles. It is slowing faster than I realised, so that in a matter of months days have doubled in length. This leads to an interesting consideration of how to measure days: by the old 24-hour clock, or by the every-growing length of time for the Earth to complete a rotation. These two timetables have divided society, and it brought home how stupid the reasons humans come up with for fearing and hating each other are.

I'm now about two thirds of the way through the book, and as the days grow longer and longer, we see all the different effects of the slowing on wildlife, on people's health, on the tides - I start to realise how frightening it would be if something we took for granted were to change. How many of us have wished there were more hours in the day? The Age of Miracles shows what else would change if that were to happen.

Wondering how this story will end. Will the earth eventually get back to normal? It seems unlikely without Superman getting involved, and I don't think he's going to feature in this story. Either nature, and humanity will adjust to the new way of life, of days being dark and nights being bright, and maybe the earth will fix on a constant, if slower, cycle. This seems the most likely ending. Or else it could slow right down until it stops altogether and everyone dies. (But then, who would be telling the story?)

And now for something completely different: the book spine poetry, a challenge hosted at Escape Through The Pages. I was kind of surprised by the results. I ended up creating two poems out of the books on my bookcases, one uncharacteristically romantic, the other somewhat darker (which is perhaps more me.) 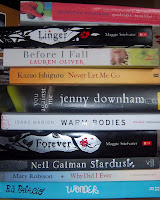 Goodnight, beautiful.
Linger, before I fall.
Never let me go.

You against me,
warm bodies,
forever stardust

Why did I ever wonder?

What was lost:
plain truth,
utopia,
affinity,
It's not the end of the world.
(liar.)

Books read today: The Age of Miracles - Karen Thompson Walker
Number of pages read today: 240 so far
Number of books read in total: 1
Books finished: 0
Today #insixwords: What if the days grew longer?
Strangest place to read: Walking to and from work