Bout of Books: Saturday and Sunday

This is how the readathon ends:
not with a bang but a whimper.

Saturday was never going to have a huge page count. I read a few pages of Watchmen over breakfast, before heading off to work. On my lunch break, I popped into Boots and realised that I couldn't focus on the words on any of the packaging. I'd been feeling a migraine brewing for a few days, and had just been relieved that it hadn't ruined my day off. But the time I'd got back into the open air, everything was a grey blur. If I concentrated really hard I could make out words, but forming those words into meaning was another matter entirely. It was terrifying. So reading was out of the question.

I powered through the rest of the day on sheer willpower, and by the end of the day I'd perked up a bit, which was just as well because my friend was coming over to watch the Doctor Who season finale and Eurovision, while eating takeaway pizza. 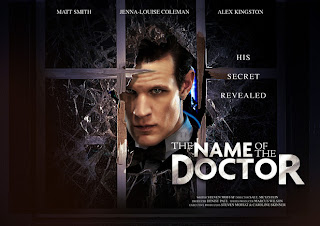 DOCTOR WHO SPOILERS, SWEETIE. Scroll down to black text if you don't want to read.

I'll be honest, I haven't been overly impressed with this season. After the last series, since the series' return in 2005, the plots have been getting bigger and bigger, whereas the latest season has been a bit more understated, with only single-episode stories, and the big mystery of "how can the Doctor's new companion have lived and died in different times and places?" being the only connecting plot-thread. This mystery hasn't really been grown or developed through the series, just left hanging there, a loose thread for the Doctor to wrinkle his brow at when he thinks to do so.

But the finale was impressive, with clips and moments involving all the previous Doctors, scenes sliced and reused right back from William Hartnell's days. That was the moment for the nerds, and we loved it. The episode was called "The Name of the Doctor." Because no one knows the Doctor's real name, only the name he chose for himself. And whatever that name is, whether it be Fred or Slartibartfast, it can never live up to the mystery surrounding his identity.


"The Doctor has a secret; one he will take to his grave. And it is discovered."

I figured out the tricksy wording just a few split seconds before the Doctor said it. (Steven Moffat, you cunning devil.) It is not the secret that is discovered - but the Doctor's grave. Because even time lords don't live forever, and somewhere, somewhen, the Doctor dies and is buried. The series' final confrontation between the Doctor and his foe The Great Intelligence takes place here - a creepy place, even for a graveyard. The mystery of why Clara keeps on turning up in his timeline, not just in the past series, but throughout his life, largely unnoticed by the Doctor, is resolved, and far more satisfactorily than I expected. And then, while the duo are trapped in the wildernesses of the Doctor's timeline - "Everything around you is me." - their attention is drawn to a solemn sillhouette, terrifying even while standing with his back to them. Even the Doctor is afraid.

Because the Doctor is the name the Time Lord chose for himself, the name that he has taken as his identity. This other man - played by John Hurt and credited as "The Doctor" - has done something so terrible that The Doctor has disowned him from himself. Theories abound, but mine is that this person, this non-Doctor Doctor, was a previous regeneration, between Paul McGann (8th Doctor, 1996) and Christopher Eccleston (9th Doctor, 2005) - during which time the infamous, appalling Time War destroyed Gallifrey, the race of Time Lord and many, many other planets. We know of the Time War only from details let slip by the only survivor, the Doctor. The next episode, due to be aired in November, is the show's 50th Anniversary special. It has long been a theory of mine that this episode's topic will be the Time War in the missing years. The cliffhanger supports this theory. But we have six months until then. 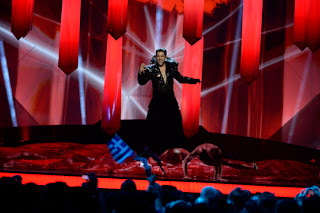 After Doctor Who came the Eurovision Song Contest. How does one describe Eurovision to one unfamiliar to it? From a British point of view, at least, it is just a chance to shamelessly make fun of the TV - a European musical competition. Well. I say "musical." It is generally considered a poor evening if there is actually much musical merit in any of the performances. There is a mixture of cheesy pop, dance music with a heavy beat, big inspirational ballads and a few strange acts. The most memorable acts of last night were Finland's song "Marry Me," an infuriatingly catchy ditty ending on a kiss between two women; Romania's falsetto-singing Dracula lookalike (pictured above) and Greece's "Alcohol is Free," which was just plain ridiculous, but had us all grinning all over our faces. The UK always does badly, whether because we are isolated from the rest of the European countries who like to vote for their neighbours, or because our songs seem to be trying too hard. I suspect the British pop industry has been ruined by being dominated by talent shows, (X Factor, Britain's Got Talent and the Voice) whose theme is pursuing one's dreams, and churns out very earnest songs on that subject.

Saturday 18th May:
Books read today: Watchmen - Alan Moore
Number of pages read today: 25
Number of books read in total: 3
Books finished: 2
Today #insixwords: little reading, pizza, Doctor Who, Eurovision
Worst lyric on Eurovision:
If you don’t know I’m in love with you
When summertime falls it becomes untrue
Because of the shoes I’m wearing today
One is called Love, the other is Pain...
(Culprit: Andrius Pojavis from Lithuania)

I've only read a handful of pages today - worse than yesterday. It is my mother's birthday, so we went out for a meal in a lovely little pub in the middle of nowhere. Unfortunately, the migraine came back in double strength around that time, and knocked me out completely for the entire afternoon. Probably writing up this blog post is a bad idea. Feeling a little better now, but not great. I expect I'm more likely to spend the evening watching Les Miserables than reading, though I will try to get a little more in before bed.