Good, errrrr, (checks clock.) morning, people. As it was my first day off work in readathon week, it was some time after 10 when I stumbled out of bed - too late for breakfast, perhaps, and too early for lunch. CAKE TIME! (with a small cup of coffee, naturally.) 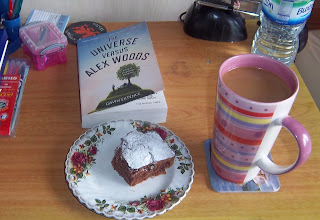 My plans for today are few: first off to finish Alex Woods. It's clear how this story is going to end, in broad terms - after all, it started at the end, and as soon as it was revealed which country Alex was returning from when he was stopped at Dover, I knew why. But this is a character story, rather than a plot-centred one, and I'm enjoying spending time with Alex and Mr Peterson. The Universe Versus Alex Woods is by turns funny, heartbreaking, intelligent and inspiring. Alex has such a strong narrative voice that you get to see the world from inside his mind, feel what he feels and get very indignant when everyone else misunderstands his motives.

I've set up my old "book chair" book stand so that I can read and knit at the same time. Double productivity! (or it will be if I get off this wretched internet.) 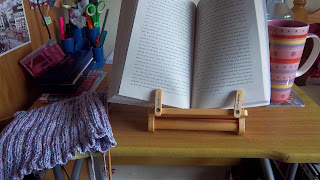 I finished The Universe Versus Alex Woods just in time for lunch. There were moments in the last fifty pages or so which felt like a nail-biting race against the clock, which was a completely inappropriate way to think of what was going on. Author Gavin Extence combines serious subject matter with a sometime uncomfortable humour, which I suppose is what life is - neither comedy nor tragedy, but both, side-by-side. It was interesting to compare my impression of Alex at the beginning of the book (and end of the story) with its ending. He is a fairly distinctive personality even in the first chapters, but the bulk of the book fleshes him out more fully to demonstrate how he became who he is.


I tried to look up 'celibate' in the dictionary, I couldn't find it. It certainly wasn't where I expected to find it - in between 'seller' and 'sellotape.'Rest assured: by the time I was ten, I had managed to find out what my mother meant. She meant that as far as our family was concerned, only the cat had a sex life.

I knew how many zeroes there were in a quintillion, but I thought that algebra lived in ponds.

Order and chaos are slippery concepts. They're like a set of twins who like to swap clothing from time to time.

We tolerate a certain amount of incompetence in our politicians and public servants, but we should not tolerate it in the death business.

Today I've decided to take part in a challenge to decide, based only upon the cover, what a book is all about and write a blurb for it. I chose The Age of Miracles, because I had already thought that the hardback and paperback designs gave off different impressions of the book's genre. Personally, I thought that the hardback was a better representation of the novel, while the UK paperback looked more like a Jodi Picoult novel. So here is my new version of The Age of Miracles based upon that cover: 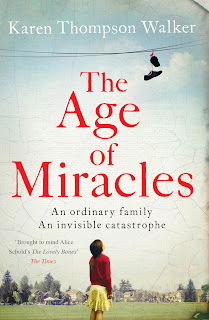 For Nancy and Joe Jennings, the move to a new town is the start of a new life, an escape from a past that threatens to unravel their perfect family. But for their eight-year-old daughter Dana, it is the beginning of a nightmare. Painfully shy, she is plunged into the centre of attention on her first day at a new school, after a playground prank goes horribly wrong. At school, Dana dreams of disappearing, but at home all she wants is for her parents to notice she's there. So she makes a plan...


8.30PM I took advantage of the bright if patchy weather this afternoon to wander around the town, where I avoided the bookshops and bought groceries, socks, knitting wool and more chocolate than I care to divulge, especially since I ate it all. Before starting the walk home (I live uphill from the town) I settled down near Sainsbury's, where there's a friendly green space and a duckpond, and made a start on Watchmen. 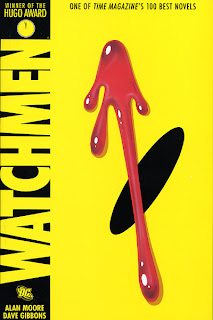 It's a bleak story, that much is clear from the start. A lot of the narration comes from the diary of a character named Rorschach, a masked and hate-filled figure in a universe that is subtly but significantly different from our own. Superheroes have come out of the pages of the comic books and into reality, but that's all in the past now. They - more like costumed vigilante figures than the likes of Superman and the Avengers - have fallen out of favour and retired, for the most part. But many have come to sad ends, and Rorshach is convinced that someone is targeting the former costumed heroes, to destroy them all.