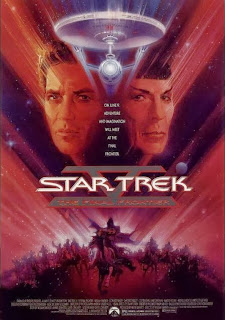 After the epic mission to resurrect Mr Spock and save the whales, Star Trek V sees the barely-functional Enterprise-A being hijacked by a rogue Vulcan cult leader and taken where no man really has gone before: the centre of the galaxy on a search for paradise.

The crew are enjoying some well-deserved shore leave at the start of this film. Kirk, Spock and McCoy are camping in Yosemite National Park like a group of aging boy scouts, climbing, cooking on a campfire and sleeping under the stars. The bond between the three is as close as ever, with their usual banter and bickering, but an undercurrent of real affection that they sometimes let show. I always enjoy watching the trio interact, but this time the humour fell a little flat. It felt a bit forced, perhaps a little obvious, raising a smile rather than the intended laughter. Their attempt at a sing-song was actually painful to sit through. "Row, row, row your boat?" Seriously?! The other main crew have paired up, too. Chekov and Sulu have somehow got themselves lost in the woods, much to their embarrassment, and back on ship a flirtation has developed between Scotty and Uhura. Where did that come from? It's quite sweet and amusing, but seems very out of character.

The plot itself, for all its grand efforts, feels more like an episode than that of a film, and not one of the better ones. Its final denouement is pompous and self-important, tackling grand questions of Life, The Universe and Everything in a manner almost as subtle as Shatner's acting. But the film - generally considered the worst - is not entirely without merit. Certainly it is more watchable than the episodes "Spock's Brain" "Plato's Stepchildren" and the one with the space hippies. By the time we reach the end of the film, it feels like there have been huge leaps in character development. We find out some deep, dark secrets about Dr McCoy's past, in a standout piece of acting from DeForest Kelley. Nine times out of ten, McCoy is secondary to Spock and Kirk, but when he gets the chance, he can break your heart. Spock, too, reveals some secrets he's been keeping all these years, and even Kirk has a moment or two of gloom amid the heartwarming friendship, predicting a lonely death for himself one day.

Next up is the last real Original Series film: The Undiscovered Country. The title worries me. I know its literary source.
Posted by Katie Edwards at 09:00