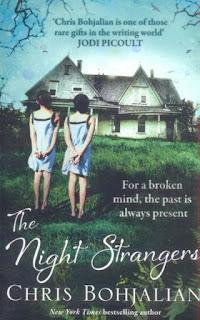 Airline pilot Chip Linton's life changes forever when he is forced to crash land his plane into a lake. Had it not been for a boat disturbing the water at just the wrong time, it could have been done relatively smoothly, but instead, thirty-nine people died. Chip survived. Several months on, still devastated by the accident and suffering PTSD, he moves with his wife Emily and twin daughters Hallie and Garnet to a new home: a big, old house in an out-of-the-way village in a different state.

But there is no escaping from the past. In the basement of their new home, Chip finds a door sealed with thirty-nine bolts, and the significance of this number - the same number as victims of the air disaster - is not lost on him, and its presence taunts him. But when Chip takes an axe to the door to reveal... a boarded-up coal hole, it is his own ghosts that are freed from their prison, in an ambiguous mix of ghost story and psychological horror. The Linton's house seems to serve the same purpose as The Shining's Overlook Hotel, a dark, creepy place with a sinister past, which makes already damaged people much, much worse. Like the best Gothic settings, this house is not merely a place where the action happens.

The strangeness is not limited to the house, however. Many of the Lintons' new neighbours are not quite like other people. Many of the women spend all their time in their greenhouses tending herbs, baking vegan food and mixing up herbal remedies, and they all seem to have names like Sage, Anise and Clary. The other people in the town shun them, even fear them, though they seem friendly enough, taking a keen interest in the twins and welcoming them into their new home. But they know too much, and seem to have their own purposes for wanting the new family to join their circle, and as the Linton family spend more and more time with the "herbalists," Bohjalian evokes a creeping sense of claustrophobic dread.

The Night Strangers is a vivid, gripping read, though a very dark one. Much as you may hope, there is an inevitability that the book won't have a cosy ending. In fact, it is not until the epilogue that the outcome of the climactic scene is made clear. I found myself re-reading in case I'd missed something, but no, the last chapter left the characters' fate unclear. Half The Shining, half Stepford Wives (with a strong seasoning of magical herbs), The Night Strangers left me feeling deeply unsettled.