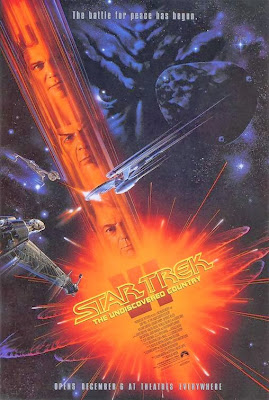 "Captain's log: Stardate 9529.1. This is the final cruise of the Starship Enterprise under my command. This ship and her history will shortly become the care of another crew. To them and their posterity will we commit our future. They will continue the voyages we have begun, and journey to all the undiscovered countries, boldly going where no man, where no one, has gone before." - Captain James T. Kirk


Excuse me for a moment; I seem to have something in my eye... 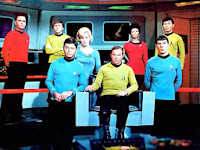 Over the past five months, I have travelled through the galaxy in the company of the captain and crew of the Starship Enterprise. With them I have visited strange new worlds, planets run by children, planets run by godlike beings, mirror universes and planets bearing an odd resemblance to the Earth of the past. Together we have defied logic, defied death, defied orders. We have fought men in lizard costumes, cooed over tribbles, been enlightened of the many, many things we never knew were "inwented in Russia," grieved for many fallen redshirts, been chased through the halls of the Enterprise by Sulu with a sword, experienced pon farr with Spock, and all in all, had a whale of a time.

In just a short time, I've fitted in 25 years' worth of character growth, seen friendships tested and strengthened, watched a young starship crew mature and develop and age. And now, in The Undiscovered Country, it is time to say goodbye. Three months before he and his crew are due to retire, Captain James Kirk is sent on a final mission: as diplomat to negotiate peace talks with the Klingons, whose entire race looks doomed to extinction. This is a role Kirk takes on reluctantly; he has never forgiven the Klingons for the death of his son. The diplomatic dinner is a disaster. The Klingon ambassador is assassinated, and Kirk and McCoy stand convicted of of his murder and sentenced to lifelong hard labour in the mines of a frozen planet. It is up to Captain Spock and the Enterprise crew to rescue their friends, expose the conspiracy and prevent the uneasy truce between Federation and Klingon Empire from breaking into all-out war.

Like the episodes, no two Star Trek movies have been alike. We've had hard science fiction, swashbuckling epic, high-stakes adventure, time-travel comedy, and Pomposity: The Movie. Now we have a political thriller which heralds a significant change to the Trek Universe as we've known it so far. But change, this movie stresses, is to be embraced, the future is not to be feared.

The Undiscovered Country gives Kirk, Spock et al a respectful sending-off, a solid finale that combines Star Trek's finest elements: friendship,  humour and courage, a sense of adventure and a hope for the future, all woven together to celebrate the twenty five years of the show and pass on the baton.
It is heartwarming from the very beginning, when Sulu's voice-over dictates his Captain's log - for he has been made captain of the mighty Starship Excelsior - but is still bound to the Enterprise by loyalty to his former commander and comrades. Spock, in his dialogues with his protegee Valaris, demonstrates just how far he has come from the uptight young officer at war with his human side. McCoy amusingly asks what every viewer has been thinking about Kirk's irresistible appeal to the opposite sex, and Chekov claims one more thing - the story of Cinderella - as Russia's own. The one blot on the record is the film's portrayal of Uhura, who has had a long and prosperous career as a Starfleet communications officer, apparently without much in the way of the Klingon language. Overall, however, The Undiscovered Country is the perfect finale as twenty-five years of story comes to a natural ending. The film provides satisfying closure, while opening the door to other series set in the same universe. This is the end of a chapter, but not of the story.

It never occurred to me until this year that Star Trek would be a thing I could get emotionally invested in. But now it's time to move on to The Next Generation (because I have all the films in a box set and ought to know a bit about this new cast before I watch them) and I am already resenting it for trying to take the place of the original series. Kirk, Spock and McCoy, and the supporting cast feel like real people to me now, good friends. How can you replace friends with brand-new, made-up characters? How can Star Trek be Star Trek without William Shatner's infamous overacting, Leonard Nimoy's incredible right eyebrow, DeForest Kelley's huge heart and lovely wonky smile? Without the calm presence of Uhura and Sulu, the humour provided by Scotty and Chekov? Can another series really reproduce the brilliance of the one it was based upon?

No doubt I'll surprise myself once more.
Posted by Katie Edwards at 09:00