Star Trek IV: The Voyage Home (The One With The Whales) 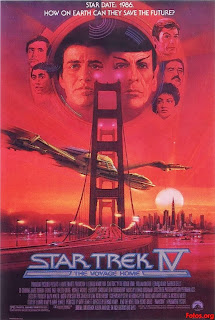 After the emotional rollercoaster ride that was the last two installments in the Star Trek movie series, The Voyage Home comes as something of a relief. Films two to four form a sort of trilogy within the wider series, each with its own plot within a wider story arc of loyalty, sacrifice and friendship. The films differ in tone and style as vastly as any three episodes in the original series. The Wrath of Khan is a swashbuckling epic, The Search for Spock a high-stakes quest driven by desperation. Part Four, generally referred to as The One With The Whales, is utterly heartwarming, sheer comedy to be rivalled only by the season two episode, "The Trouble with Tribbles."

The crew of the Enterprise return to Earth, with a newly resurrected Captain Spock aboard, to face the consequences of all the crimes they committed to save him. Only problem is, they can't get home. Earth is under threat by a strange, alien presence which will stop at nothing to make contact with humpback whales. Unfortunately, the whales were wiped out two hundred years previously! It is up to Kirk and the Enterprise crew, aboard an unfamiliar Klingon (or possibly Romulan) ship to save the day, thus:


McCoy: "You're proposing that we go backwards in time, and find humpback whales, bring them forward in time, drop them off, and hope to hell they tell the probe what to go do with itself?"
Kirk: "That's the general idea."
McCoy: "Well, that's crazy!"
Kirk: "You got a better idea, now's the time."

After a surreal dream-sequence, Kirk, Spock and the others find themselves in 1980s San Francisco, and this is where the fun really starts. As the team try to fit into a very '80s Earth, I was reminded of nothing so much as the Back to the Future films (released around the same time.) Spock's concession to blending in with people who have never seen an extra-terrestrial consists of ripping a piece of material off his Vulcan robes and using it as a headband. 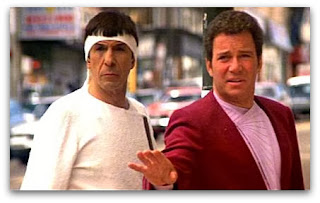 Every member of the cast gets a chance to shine in this film, and they do not disappoint. Highlights include the Russian Chekov asking random passers-by where he might find "nuclear wessels," (remember, this was during the cold war), Scotty's first attempts to use an early computer ("Hello, computer!") Doctor McCoy in a twentieth-century hospital, and Spock knocking out an obnoxious punk with a nerve-pinch, earning a round of applause from all the other passengers. Actually, shall we just say everything Spock does in this film? His logic and intelligence are as sharp as ever, but he is lovably bewildered about the social ways of humans. Fortunately he has Kirk on hand to try to guide him, and their scenes together are simply adorable, with Kirk all the while trying to get Spock to address him not as "Admiral" but as "Jim." (The scene in which Kirk and Spock argue about whether or not they like Italian food reminded me of nothing so much as an old family story about my grandparents on honeymoon, pretending to be a long-married couple!)

Unlike the last two installments, the tone is too light to really convince us that there's any real danger. The earth may be at risk, and at one point a member of the crew is considered to be fatally wounded, but we feel quite secure that, this time it will all be all right in the end. Of course the crew manage to get back to their century, complete with two humpback whales named George and Gracie. Yes, Kirk and crew still have to face trial for their actions, but considering that they just saved the world from destruction, Starfleet's idea of punishment is to demote Kirk back to the rank of Captain, and give him a shiny new starship - another Enterprise, in fact. As the shuttle approached the starship, and her name and license number (same as before with an extra A on the end) were revealed, I may or may not have been pulling some strange expressions, because I was not going to cry, not at such a happy moment. Such expressions of emotion would be illogical.

I've said before that I generally dislike the use of a "reset button" story, but once more, I'll let it pass. After all, would Star Trek be as charming if it wasn't a bit cheesy from time to time? The three-part story which began with The Wrath of Khan (following on from The Motion Picture) reaches a natural ending here, and instead of dragging it out too long, the series can pick up from the familiar territory of the Enterprise without having to invent yet more convoluted excuses to get our old friends back together.

The Voyage Home is perhaps less powerful as The Search for Spock or The Wrath of Khan, but not every story has to tear its viewers' emotions to shreds. After the turmoil experienced while watching the previous two movies, I certainly felt that we had earned a happy, fun and amusing story, and The One With The Whales is most definitely that.
Posted by Katie Edwards at 09:00