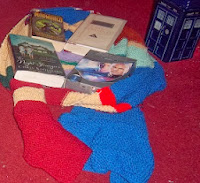 I didn't write a Sunday Summary last week as I was busy with my Moonstone midway post. Most of my last two weeks' reading has been from Wilkie, although I took a couple of days out last week to read Yahtzee Croshaw's Mogworld. My friend Judi lent me Mogworld with the strict instructions not to look at the back blurb, so I had no idea what to expect from it. The only clue I had was that she lent it to me in response to me giving her a copy of Redshirts. Like Redshirts, Mogworld follows a group of supporting characters in someone else's epic adventure: in this case a fantastical world which bears an uncanny resemblance to a role-playing game. (My first thought was Dungeons and Dragons, but their world later turned out to be something else entirely.) Protagonist - not hero - Jim died at the beginning of the book, but a meddling necromancer brought him back as a zombie. All he wants is to die again and stay dead, but the plot has other plans for him. Mogworld was a light-hearted, easy read, not as brilliant as Terry Pratchett, but with a similar sort of eccentric British humour. I got through this in two days.

I finished The Moonstone earlier this week. Although none of the narrators in the second half managed to be as entertaining as Gabriel Betteredge and Drusilla Clack, Betteredge made another few appearances, acting hilariously passive-aggressive when coerced into a mad scheme of which he didn't approve. New character Ezra Jennings is a mysterious, rather tragic figure, a doctor's assistant who is terminally ill and addicted to opium, probably the most interesting character after Betteredge and Clack. The story kept me guessing throughout, up to a very satisfying conclusion. (I will write more about this later on this week.)

My current read is The Night Strangers by Chris Bohjalian, a book I picked up on impulse from the returns shelf in the library. It's a sort of psychological ghost story, an extended metaphor about how a past trauma can continue to haunt a person's everyday life. Some parts of the book are written in the second person, and this, combined with detailed, detached descriptions of an airplane crash-landing from the point of view of the pilot, was utterly terrifying, giving an immediacy to the disaster that any other narrative choice would be unlikely to capture. The story follows the pilot, Chip, and his family, as they move to a new home and try to put the tragedy behind them. Unfortunately, their new home is reminiscent in many ways of The Shining's Overlook Hotel, and the only new neighbours to reach out to the family are a group of sinister "herbalist" women who seem to have their own reasons for wanting Chip and his family in their circle.

After bidding farewell to Captain Kirk, Mr Spock and Dr McCoy last week, I made a start on Star Trek: The Next Generation. Before I actually resigned myself to becoming a Trekkie, this series was more what I expected from Star Trek. I think I was first shown a clip of Captain Jean-Luc Picard in school; I can remember which classroom I was in, round about year 8, and I cannot for the life of me remember why it was shown. Even then, I think there was something appealing about the show. I'm liking The Next Generation a lot, though I'm not in love with it like I am the original series and its crew. I don't think I want to fall in love with it. It would feel disloyal. 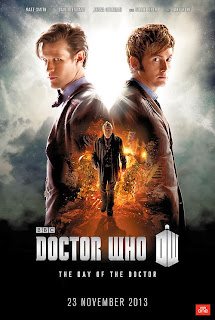 Also in the world of ancient science-fiction-ish TV, Doctor Who celebrated its fiftieth anniversary this week. On Thursday, the BBC showed a moving documentary-drama called An Adventure in Space and Time, all about how Doctor Who came into being in 1963. Then, last night, was the eagerly-anticipated 50th anniversary special. The episode was simultaneously broadcast all over the world, with special cinema showings and many fish-finger-and-custard parties. (A disturbing number of my friends posted pictures of this, erm, delicacy on Facebook.)

I watched the episode with my dad at home, wearing my Tardis T-shirt and Doctor Who (ish) scarf. "The Day of the Doctor" started by going right back to the beginning, using the original 1963 opening credits and starting off in the very same school where Susan Foreman, the Doctor's granddaughter, once attended as a precocious pupil.

The main theme of the episode came as no real surprise. I had been predicting its subject for as long as I'd been aware that there would be fiftieth anniversary celebrations. And about a week ago, the BBC posted a prequel mini-episode which took away all doubt. The first thing I knew about this video was what was intended to be a major surprise, announced by the official Doctor Who Twitter account with no spoiler warnings, before I even knew there was a spoiler to avoid. I was (and am) very cross to find out about that, and thought that the story deserved to be part of the episode itself, rather than a web exclusive. Though it didn't tell me more than I'd already suspected about the anniversary episode, I'd rather have gone into the story with no more than my own theories.

Although the story showed the Doctor messing with his own timeline and rewriting certain parts of the series' narrative, it was done with illusion rather than my pet hate, the reset button, so I'll let it pass. Matt Smith and David Tennant were a lot of fun to watch together - I'd forgotten how much I'd enjoyed the Tenth Doctor's adventures (when he wasn't being angsty.) And John Hurt as the other version of the Doctor, the one who his later incarnations never speak of, was a wonderful addition to the canon (even if not numbered) tormented by his choices, bewildered by his later "childish" incarnations, but lovely, hardly the villain. It's always fun watching the past and present regenerations reacting, and this episode showed all of them collaborating. Yes. ALL of them. There were a couple of nice, unexpected cameos, though I would have liked to have seen more guest appearances rather than re-use of old footage. Really, I wanted many of the people who had vehemently denied being part of the episode to have been lying, although if that were the case, it could have been quite gimmicky, sacrificing storytelling. But the storytelling was well done here.

Doctor Who was a great way to mark the beginning of a week's holiday. The last few years I've taken the final week permitted before Christmas, as a means of recharging my batteries before the craziness that is December in retail. I plan to get a lot of reading done, perhaps watch some classic Doctor Who and more Star Trek: TNG, and to get back into my NaNoWriMo project, which has come to a halt at exactly 10 000 words. 40 000 in a week is not going to happen, but if I can get back into the story, I'll be pleased. On Friday I'm going to stay with my sister in London, where I intend to get some Christmas shopping done, and also catch up with one of my best friends who lives nearby.
Posted by Katie Edwards at 18:44