I began the year determined that 2010 would be The Year of the Reread, (well, mainly rereads!) devoted to rediscovering all my old favourites in four different genres: Classics, Classic Kids', Gothic and Fantasy. It started well enough, but working in a bookshop it's impossible to ignore all the shiny new books that call to me up to eight hours a day, and excluding the book I'm currently reading, I got through exactly the same number of new (to me) books as last year: 82.

The goal: I plan to reread all of Jane Austen's novels. Also, something by Georgette Heyer. [...] something by each of the Brontes. A Tale of Two Cities, as one of my favourite novels of all time, plus a new Dickens that I've not yet read.

The reality: I got through two Austens: Northanger Abbey and Sense and Sensibility, two Heyers (so at least I'm in credit there: Frederica and The Masqueraders) but failed completely with the Brontes. I didn't read A Tale of Two Cities, but reread Great Expectations and A Christmas Carol. My new Dickens was The Mystery of Edwin Drood, if that counts, being unfinished, and I also read Hamlet and three Sherlock Holmeses.

The goal: I won't list them all here, but I planned to reread all the books that really summed up childhood for me, the books I lived more than merely read.

The reality: I didn't even get started on my L. M. Montgomery collection, except a new one for me: Pat of Silver Bush. Ditto my Katys or my Little House. I did manage to read a fair few school stories in the Chalet School and Trebizon series, and the complete set of a series I used to get only from the library: Penny by A. Stephen Tring. I reread Alice, A Little Princess, Heidi, The Railway Children and those Chronicles of Narnia I hadn't read in December 2009.

The goal: basically my reading list for my university Gothic Fiction novel, and other books that I felt ought to be in the canon.

The reality: In fact I had grown so tired of vampires and the like that I only bothered with Carmilla and Dracula before putting that part of the challenge on hold. I read a few modern teen gothic novels later in the year, but nothing classic.

The goal: David Eddings' Elenium, Julia Gray's The Guardian Cycle, everything by Robin Hobb and Cecelia Dart-Thornton, a Lord of the Rings reread, and some Pratchetts.

The reality: I got quite a decent amount of fantasy read this year, but with the exception of Lord of the Rings, and a couple of others, they were all by Terry Pratchett or Neil Gaiman. Or both.

Three Books I've Been Meaning To Read For Ages

These were the aforementioned Gaiman's Neverwhere - and once I read this one I had to see what else he had done. Definitely worth the wait! - Middlemarch by George Eliot and the Gormanghast trilogy by Mervyn Peake. I am still plodding through Middlemarch in between lighter works, but have not yet touched Gormanghast.

At the end of September, I fortuitously stumbled into Speak Loudly, a campaign amongst book bloggers to prevent censorship of books in schools. I stopped being a lonely person sat at a computer sending the occasion review into the ether to be possibly read, possibly not, by about five people, and became a Book Blogger. Because of the nature of the campaign, most of the reviewers whose blogs I found myself following focused on teen and young adult books, and I was reminded that there is some good stuff out there for that age group - it's not all trash, and even the trash can be enjoyable. 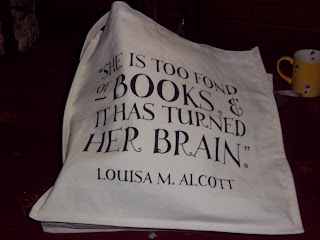 Neverwhere by Neil Gaiman
I had been told to read this fantasy story of London Below about five years ago, and this year I finally discovered why. The London you might think you know is brought to life in a brand-new mythology in which there really is an Earl who holds court on an underground carriage, an Angel called Islington and Black Friars. A dark story packed full of imagination.
Before I Fall by Lauren Oliver
This is one I was just drawn to in Foyle's bookshop in London (London Above, that is!) and on the strength of the cover I was determined to read. An impulse-buy, but well worth it.
The Help by Kathryn Stockett
The tale of three women in the Deep South at the time of the Civil Rights movement. One of the few multi-narrator books where I care for all three characters equally, touching, tragic and infuriating, but with a great heart and sense of humour.

One Day At A Time by Danielle Steel.
I wasn't expecting quality literature with this book, but I wanted to throw it across the room on average about once per page! Steel's writing style goes against everything I've been told in every creative writing lesson I've had since schooldays. She never shows if she can tell, and what she tells goes against the evidence of what little showing she does. And she repeats this telling incessantly. I mildly cared about the characters and their situations, but I couldn't get past the atrocious writing style.
This Time For Keeps by Dee Williams.
Ditto. Perhaps it's the romance genre - but light and fluffy doesn't need to equal bad writing.
Fallen by Lauren Kate and Crescendo by Becca Fitzpatrick.
Two Fallen Angel romances with drippy heroines. Fallen had some very good writing in it, but I found the relationship, if it can be called such, to be insubstatial and unrealistic. Crescendo was a sequel to Hush, Hush, which I found to be average but enjoyable, but with book two I was just relieved when it was all over.

So in conclusion: I may have failed miserably in my challenge this year, but I think I can be pleased with myself. In new reads and rereads I've managed to get through 131 books, not including the two I'm still reading. I went from blogging a couple of times every couple of months to updating several times a week, and from 5 followers (most of whom I knew anyway) to 64. In my turn, I discovered dozens of like-minded bookworms from all over the world, and enjoy swopping recommendations and making new discoveries through the book blogging community.