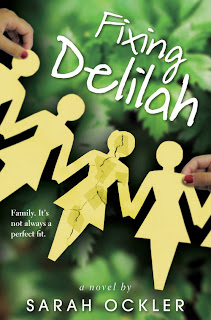 Fixing Delilah isn't even available to buy in the UK yet, but thanks to the wonders of the internet I was able to order a US copy of the book. I commented in my review of Ockler's first novel, Twenty Boy Summer, that the US paperback has a different texture to it than a UK one. Fixing Delilah is a hardback book, but I still found enough little differences that interested me: the copyright page has more information in it. Under the heading of Library of Congress Cataloguing-in-Publication Data a twitter-sized synopsis and hashtag or blog-label-style details of the book's contents, such as Secrets, Family problems and Vermont.
Delilah Hannaford is a troubled teenager who doesn't seem to know who she is any more. We get to see her inner turmoil first:


"Despite all evidence to the contrary, I'm really not the car-denting kind of girl. I'm also not the lipstick-stealing, school-skipping, off-in-the-woods-with-someone-I-barely-know kind of girl, or the kind who loses all of her dignity over a scandalous cell phone picture on a trashy blog."

Like Twenty Boy Summer, this is a holiday book, and we don't get to see Delilah at school. We get an idea of what her school life is, though, and I have an impression of a character I probably wouldn't sympathise with if I didn't get to know her from the inside out, so to speak. If portrayed through the eyes of someone else, or possibly even with a third-person narrator, I would probably see her as one of the popular kids, maybe a bit shallow, messed up, one of the cool kids who I'd probably have nothing to do with if I were in their class. But because Ockler presents Delilah as narrator, I found her, if not always likeable, identifiable. Because I know well enough what it is like to appear like one person and feel like another, to find myself doing things I really don't want to. And reading Fixing Delilah, I found myself thinking, "maybe we're not so different after all," the "cool" kids and the outsiders, the "good" girls and the "bad."

Not only does Delilah feel lost, but her relationship with her mother is a mess. Claire Hannaford sees that Delilah is "seeking attention" but won't give her any, doesn't try to understand why her daughter's gone off the rails; she is far too caught up being an efficient businesswoman, successful but stressed, to think of family. Alternatively, perhaps it is too painful - if Delilah's relationship with her mother is strained, it is nothing compared with the extended family. Eight years ago, Claire, her sister Rachel, and her mother Elizabeth had such an argument that they have never spoken since, and now Elizabeth, Delilah's grandmother is dead. Delilah, Claire and Rachel return to Red Falls, Vermont, to sort through Elizabeth's belongings and make her house ready to put on the market. While there, Delilah starts trying to find out the secrets in the family's past, secrets that appear to be focused on Claire and Rachel's youngest sister, Stephanie, who died before Delilah was born.

Family is the main theme of Fixing Delilah. There are many parallels with Delilah and her dead aunt Stephanie. They look alike, Delilah was Stephanie's middle name, Delilah was conceived not long after Stephanie was buried. Though as far as I noticed there was no hint of a throwaway remark on the subject of reincarnation, the idea flitted across my mind. More realistically, there was the threat of history repeating itself. Delilah worries that perhaps the problems with the family are inescapable, that perhaps her relationship with her mom is doomed to go the same way as Claire's with her mother. But ultimately, this is a story about reconciliation, and taking responsibility for one's own future and relationships. I didn't like all of the characters all the time, especially Delilah's mom, or the memory of her Nana, but ultimately we are presented with a story about realistic, flawed characters who, like Delilah (and like myself) aren't always the person they seem to be, despite all the evidence.

Sarah Ockler excels in setting the scene, in writing simple description that captures a scene, a sound or a moment perfectly. In Twenty Boy Summer, it is the sound of the sea: Shhh, ahhh. Shhh, ahhh. Here we have the cool, robotic voice of the Sat-Nav system: Left turn in four. Hundred. Feet. Like Twenty Boy Summer this is a holiday story, but instead of the California beaches we are treated to a trip to Red Falls, Vermont. Now, Vermont is a state I know nothing about. I imagine it cold and sweet, probably because it  is the home of Ben and Jerry's ice cream. Red Falls is certainly sweet, flavoured with maple syrup candy from the trees that no doubt give the town its name. Cold - not so much. It is a summer story, after all. Reading it in a chilly English December, it took a bit of brain-adjustment to get my head around Delilah's romantic interest Patrick working on the house shirtless, or taking her kayaking and swimming on the lake. That aside, I had a vivid image of a small, rather quaint lake town that is increasingly becoming a tourist-trap in summer. I'd quite happily visit it, minus, of course, the Hannaford family troubles.