The Voyage of the Dawn Treader, C. S. Lewis 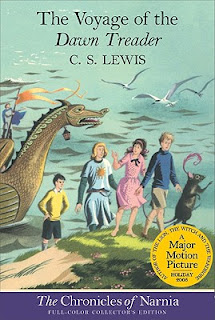 One evening, when I was seven or eight years old, my father sat me and my sister down and told us he was going to read us a bedtime story: The Voyage of the Dawn Treader. We were introduced to "a boy called Eustace Clarence Scrubb, and he almost deserved it," in one of the best opening passages of any book I'd read before or since. About a page later, my delight increased as I recognised the names of Eustace's cousins: Peter, Susan, Edmund and Lucy Pevensie, and realised that there were more Narnia stories than I had realised!

There is no doubt about it: there is no more insufferable brat than Eustace Scrubb ("His parents called him Eustace Clarence, and masters called him Scrubb. I can't tell you how his friends spoke to him, for he had none.") at least in the first half of the Dawn Treader. When he finds himself on a gorgeous ship in a magical land, he proceeds to make himself as disagreeable as possible by being selfish, lazy, greedy and a know-it-all. I can't help but think that Lewis was was  making fun of modern sensibilities of the time in the character of Eustace, whose parents were "vegetarians, non-smokers and teetotallers and wore a special kind of underclothes," radical in some ways and standing for no nonsense. Of course, as far as Lewis was concerned, a bit of nonsense is essential to the human existance (and I have to say I quite agree with him.) Eustace is rather a caricature at first, but after a rather traumatic experience, he shapes into a decent and fairly three-dimensional character, who reappears as a protagonist in two later Narnia books.

One of my favourite characters in the Chronicles of Narnia plays a major part in this story. Reepicheep was introduced in Prince Caspian and his character expanded here: a fearless warrior, pure of heart, full of adventure and chivalry, he contains all of the best character traits of any of King Arthur's knights. And he is a mouse.

The Voyage of the Dawn Treader is my very favourite book of an outstanding series of children's books, for its sheer scope of adventure and imagination. In this book, Edmund, Lucy and Eustace join King Caspian X on an epic journey to explore the lands beyond the boundaries of Narnia, and to find out what has happened to Caspian's father's greatest friends who were banished from the kingdom of Narnia by his evil uncle, King Miraz. Reepicheep has an additional adventure planned: to sail to Aslan's own country or perish in the attempt. The group visit a number of very different islands and face a variety of dangers along the way. It is a rather episodic story, with self-contained adventures on each island: Dragon Island, Deathwater, and the terrifying darkness of the Island Where Dreams Come True. (Not daydreams. Nightmares.) All are brought to life in delicious detail, full of adventure and possibility. My favourite part of all is the Island of the Voices, where Lucy must go upstairs in a magician's house and perform a spell from an enormous spellbook whose magic comes not only off its own pages, but out of the novel itself.


Most of all, I love The Voyage of the Dawn Treader best because this shows Narnia in a time of peace and prosperity. This is no life-or-death race against time to save the whole world, or protect the country; this is pure adventure for the fun of it, because they can.

The Voyage of the Dawn Treader has been made into a live action film which is showing in cinemas now. (I shall be seeing it later this week.)
Posted by Katie Edwards at 19:18