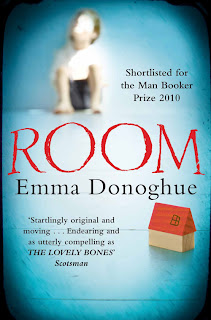 It's Jack's birthday, and he's excited about turning five. He lives with his Ma in Room, which has a locked door and a skylight, and measures 11 feet by 11 feet. He loves watching TV, and the cartoon characters he calls friends, but he knows that nothing he sees on screen is truly real - only him, Ma and the things in Room. Until the day Ma admits that there's a world outside...

Told through the eyes of a five-year-old boy, at first Room seems to be a quirky family story about a family of mother and son. Their world is tiny, but to Jack, that's the way the world is. There's real, which is Room and everything in it, and then there's TV.

And then there's Old Nick, who is not Room and not TV. Upon the introduction of Old Nick, the perspective shifts and we discover what Jack hasn't realised: Room is a prison, and Ma is a young girl abducted and held captive in a soundproof shed. Once you realise this, you can't help but think of these real-life cases reported on the news that once uncovered were impossible to avoid, splashed all over the papers, monstrous crimes that must be exposed, and at the same time you step back to try to grant the victims privacy. With such subject matter, Room could so easily be unreadable, with an author trying to imagine the unimagineable, fictionalising a scenario that to its survivors were all too real for so many years, making the book feel intrusive or simply downright depressing. Donoghue manages to avoid this trap by using Jack, not Ma, as the protagonist, and for whom there is nothing sensational about his lifestyle - this is just the world.

Jack is a very bright child, yet he is only a child and he can only describe the world as he sees it. Through his limited vocabulary, describing what to him are the mundane realities of life, we get to understand the true horror Ma is concealing from him. As they plan their Great Escape I found myself getting very frustrated with Jack for his reluctance to leave and then his homesickness for Room and for saying or doing things that upset Ma, his mother who has been through so much trauma trying to protect him. But he is only five and this is the only world he knows.

The driving force of Room which keeps it from being morbid or mawkish is the love Ma has for her son, and her courage in trying to bring him up to the best of her ability, making a routine and refusing to give up. Perhaps in places the story seems to be too easily resolved, but you know it will never be easy for Ma and Jack to adjust to the outside world - a world which until a few weeks ago Jack didn't even know existed. Jack is still young, still learning, but I suspected it would take a long time for Ma to recover from seven years of imprisonment. Her love for Jack is consistantly shown to be the thing that helped her survive.