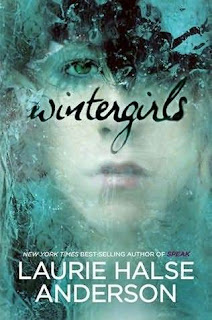 At the beginning of Banned Books week in September, the Speak Loudly internet campaign reminded me that among the rubbish, there is a lot of important and good-quality young adult fiction about, and I returned to Speak, one of my favourite books when I was about sixteen. Anderson's mixture of humour and tragedy, poetry and really serious issues that made you think, and I was excited to read another of Laurie Halse Anderson's novels.
I found Wintergirls to be a much more disturbing and difficult read than Speak, full of poetic and creative imagery, but lacking the latter's humour. Its central character is Lia, an eighteen-year-old girl who is trapped in a dark, cold world of anorexia and self-harm. Cassie, the girl who was her best friend since third grade, has just died, killed by her own eating disorder, and added to Lia's troubles is the knowledge that Cassie had tried to call her that night, not once but thirty-three times.

Unlike Speak, whose sad, lonely protagonist was one I could recognise all too well in myself, I found it difficult to identify with Lia, and found myself baffled and frustrated to read her thoughts and know all too well where she's all wrong. A few years ago, I was with a friend of a friend who was stick-thin and counting calories on the back of a pot of pasta salad. I could see she had a problem, but I felt helpless, knowing that I couldn't get through to her telling her that someone of her age and size shouldn't even know what a calorie was. Reading Wintergirls provoked the same reaction, and I felt quite baffled and adrift in Lia's thoughts. It was clear from early on that her goal of losing more weight wasn't about looking slim to be pretty, but a target to aim for, and keep aiming for. When she achieves her goal of losing five pounds, she sets herself five more to lose.

Now, I'd always been told that "eating disorders are mental illness," and "it's not about losing weight, but control," but I'd never really been able to understand this. Books I'd read as a teen exploring the issue, tended to be rather two-dimensional: girl (because they're always girls in the books) thinks she's fat, girl goes on a diet, girl keeps pushing to lose a little more weight, family starts to worry, girl thinks they shouldn't worry, girl admits she has a problem, girl gets treatment.

Wintergirls has many more dimensions. As an outsider I found Lia difficult to fully sympathise with: she knows she's got a problem, why doesn't she want to be helped? At the same time, as an insider - reading her thoughts in first person - I found her hard to understand. Then I realised, Lia was trapped, didn't understand her own thoughts. Anderson uses a great deal of poetic imagery, which could be very effective but I couldn't always understand what she was trying to say. Again, perhaps this was a deliberate decision - to portray a messed-up mind, where madness and reality mix and mingle to create a new reality. Wintergirls evoked in me pity more than empathy, and I think I will need to read it more than once to pick up on what I missed the first time around.