After a lovely - but too quick - day off with plenty of reading, I was back at work today, where I spent much of the time manning the front till. This is not one of my favourite jobs as I'm not allowed to wander off and get anything productive done, but just have to stand there and serve customers. Most are friendly or neutral - I haven't had any really unpleasant people for a while - but smiling at everyone is tiring. Still, the coming week has plenty of other work to do, and I spent the last part of the afternoon making lists with bullet-points, trying to organise every small detail of what I have to do on each day. (I am a fervent believer in lists. They make the jobs feel less overwhelming, and it is a nice feeling to cross items off.)

I couldn't get to sleep for ages last night, for no one's fault but my own. I tell myself that the computer must go OFF at 10PM on a work night, and that I must wind down with a book for half an hour to an hour before switching off the light, but that time crept to 10.20... 10.30... 10.45... I was in bed by about 11, but my mind was still whirring. So I made a start on my next read: Necropolis by Catharine Arnold. It is a beautifully macabre history of London, the people who died there and the burial rites throughout the centuries. I continued with this book at lunch time, and have got up to the various plague epidemics before the Great Fire of London. Having lived in London for a few years, I do love to find out about the stranger things in its history. It is a very strange city. 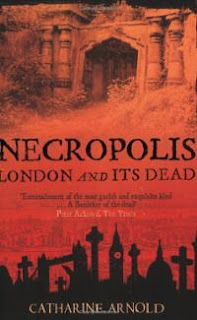 I had intended to read more when I got into work, but instead, inspired by the video I watched and shared yesterday, of Neil Gaiman's advice for budding writers, I brushed the cobwebs off an old project: a screenplay adaptation of L. M. Montgomery's Rilla of Ingleside. My recent "work" on this project has been a scene-by-scene outline, but though I hadn't finished the planning, I felt it was time to jump in and actually do some writing. First drafts can be edited, but blank pages can't.
Posted by Katie Edwards at 21:45