Today has been another quiet, fairly unremarkable day at work, but I was pleased to unpack the new editions of American Gods and Neverwhere. Of course, it's great when we sell out of my favourite books, because it means I'm getting to share the love, but the shelves feel incomplete without them. And they have new, colourful covers! (If I'm totally honest, I think I prefer the old black paperbacks, but the new ones are also very nice and exciting in their novelty.)

I've been working my way through In One Person by John Irving, which is the first book I've read by this author. It's an enjoyable, character-based novel, which hops around the protagonist's timeline, from his teenage years at school, to travelling Europe as an adult, various lovers, male and female, and back to his childhood spent around the amateur theatre company his family were part of. The narrative seems to be arranged by theme rather than chronology, and gives an idea of how a person's character is formed by people and events throughout one's lifetime. I had planned to read a lot more this evening, but phoned my sister and ended up chatting for nearly an hour. I'd like to get to about page 400 before bedtime, though. 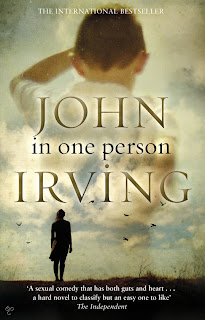