This morning was a grey, dull day and impossible to wake up. A single coffee wasn't enough, and unfortunately I've been feeling and acting somewhat like a she-Hulk this morning. Sincere apologies to those who were on the receiving end. Have a Nutella cupcake as a peace offering. She-Hulk likes baking cake, apparently. 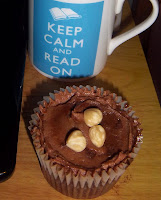 I haven't done a lot of reading, again, today, because I got stuck writing a new scene for my Rilla of Ingleside adaptation. (Actual writing, guys! Two days in a row!) Where yesterday's work involved a lot of typing up from the original work, reworking speeches and scenes, today I had to use my imagination to flesh out characters who are important in the series but don't have an awful lot of on-screen time in the novel. In particular, though this is the story of the younger generation, I wanted to make Anne and Gilbert still recognizable as the characters countless readers have fallen in love with. In Rilla, they are mostly just Doctor Blythe and his wife: wise and patient and lacking the spark that makes their personalities so, well, them.

I'm up to the 19th century in Necropolis, which has described the shift in people's attitudes to death over the years, from pragmatic acceptance to sentimentality, from memento mori to lavish memorials. The book also, briefly, told of 23-year-old Jane Webb, author of a book


Set in 2126, in an England that had reverted to absolute monarchy, this featured prototypes for espresso machines, air-conditioning and, most prophetically, 'a communication system that permitted instant world dissemination of news.'

This chick predicted the internet. Why have we never heard of her? And they say there's no place for women in science fiction!

I don't expect to finish Necropolis tonight. I plan to watch a couple of episodes of one of my many box sets, then have an early night. (It may be a bank holiday tomorrow, but I still have to work. Here's hoping for a sunny day so that everyone'll go to the beach and let me make a start on my huge list of things to be done this week.)

All in all, it's been a good readathon. I didn't expect to read all of the books on my list - Cuckoo's Calling and Perdido Street Station are still outstanding - but my to-read pile is starting to look like it's getting under control now. I must rectify that.