Yesterday's Bout of Books did not produce amazing results for me, but at least I finally finished that Lovecraft book. I found the stories effective and creepy, once I'd got used to the prose, but this is an author who requires a lot of concentration; something I was lacking this weekend. 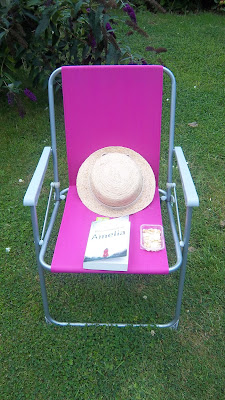 Today is another day off work for me, and I've had a lot more success reading Reconstructing Amelia in the garden by Kimberley McCreight. (I keep wanting to call it Finding Amelia for some reason, so if that alternative title turns up on the blog - sorry.) This book shows a mother trying to come to terms with her grief and uncover the mysteries surrounding the death of her teenage daughter. At first, it seems that Amelia committed suicide, a thing that her mother Kate can barely get her head around. And then evidence comes to light to suggest that Amelia was murdered.

McCreight uses a mixture of narrative techniques in the uncovering of the mystery, alternating between traditional third-person, past-tense scenes following Kate in November, snippets of text messages, emails and Facebook updates which are uncovered in the investigation, and flashback chapters from Amelia's point of view, which are told in the first person, as if in a diary. These last seem a bit strange to me, as the most intimate and personal voice is that of someone who is no longer around to have a voice. Still, I guess that's the point of the novel: to get posthumously reacquainted with Amelia as a person, rather than as the daughter Kate thought she was. The novel demonstrates the challenges of bringing up a daughter in the contemporary world, especially as a professional single parent, and showing how even a good mother-daughter relationship can hide secrets. Can a mother really know her daughter?

Finished Reconstructing Amelia, which turned out to be a satisfying mystery (if some characters' actions were somewhat unlikely. Clues were sprinkled throughout the book like a jigsaw puzzle: you might figure out some answers before being told, but it is not until the end that you find out how they all fit together.

I used to want to have a family of my own, somewhen, but in the last few years I've sadly come to realise that I don't think I could be bear to be responsible for bringing up children with the world as it is today. Reconstructing Amelia reinforces that. The world has always been a horrifying and wild place for teenagers - see Lord of the Flies and Heathers, just as a couple of examples. But in this age of inescapable internet, smartphones, and a somewhat self-obsessed culture that encourages everyone to share everything with the world (says the blogger!) the teen's senses of immortality, independence and indiscretion, combined with perhaps not as much wisdom as one might think, can be explosive. We see the results on the news from time to time, and Reconstructing Amelia gives a fictional, extreme, but far from unprecedented example. (And I apologise if this sounds patronising to teenagers. It's not meant that way. I am just grateful that there was no such thing as Facebook when I was a kid and that my internet activities were limited to fangirling on boybands' forums, printing photos of said boyband members, and writing the occasional terrible fanfiction and angsty poetry. Who knows what might be out there if I'd had a Twitter account at fifteen?)