November. The beginning of the busiest time of year for anyone who works in retail. The clocks have gone back, it is dark when you leave work, but the Christmas lights have not yet gone on to cheer you up. And for many of a literary bent, it is also National Novel Writing Month, or NaNoWriMo for short, a project I attempt most years as a desperate bid to hold on to the part of me that neither my employers, the approaching winter, nor the people I deal with every day have claimed as their own, and try to get fifty thousand words of continuous fiction onto paper in a month. So it would be absolutely ridiculous to sign up for a bloggers' readalong on top of all that, right? 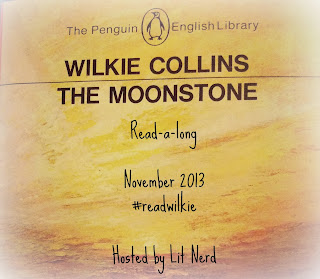 Ellie, not to be confused with that Ellie, or the other Ellie, is hosting a month-long readalong of Wilkie Collins' The Moonstone, which is generally considered the first example of detective fiction. After reading other bloggers excitedly blogging and tweeting about this readalong, I trundled along to the library after lunch, and lo and behold, there were two copies sitting there in the classics section. Surely, it was meant to be!

This is to be a very laid-back readalong, allowing an entire month to read the novel, updating once at the midway point around the 16th November, and once more at the end of the month. There will also be an ongoing twitter discussion of the book at #readwilkie.

Collins writes in his preface that this is a novel designed to "trace the influence of character on circumstance," promising a character-driven plot full of interesting, proactive people who do more than simply allow things to happen to them.

I'm only a couple of chapters in so far, but I am already enjoying the narration of Gabriel Betteridge, an elderly steward to a well-to-do family involved many years ago in a mystery surrounding a missing, allegedly cursed, Indian diamond. Betteridge is a warm, good-humoured narrator, constantly rambling off on tangents which flesh out the facts of the plot with depth of character and background, while being brought back on-topic by his daughter.

"In answer to an improvement on this notion, devised by myself, namely, that she should tell the story instead of me, out of her own diary, Penelope observes, with a fierce look and a red face, that her journal is for her own private eye, and that no living creature shall ever know what is in it but herself. When I inquire what this means, Penelope says, "Fiddlesticks!" I say, Sweethearts.