Hi. Somehow it's been a week since I last posted, to my shame. I've got three reviews (two film and one book) in note form, but none of them have quite made it into coherent sentences. As a teaser, here are the six-word versions.

Thor: The Dark World: Funny, epic, Loki is the best.
Star Trek V: The Final Frontier: Cringey in places, not all bad.
Eleanor and Park by Rainbow Rowell: Sweet, nerdy, much sadder than expected.


Books I have acquired 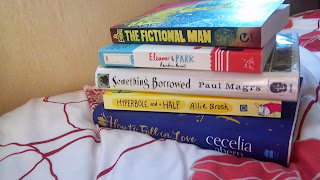 This week has been the week of accidental book-buying. Some were deliberate. I went shopping in Portsmouth with Judi on my day off, with the intention of buying some Christmas presents, looking in the outlet shops in Gunwharf Quays and stocking up on DVDs in HMV (because, after a lot of hard work from the Isle of Wight HMV staff and loyalty from the customers heroically snatching the store back from the brink of closure earlier this year, the landlord sold them out in favour of yet another convenience store, leaving the entire population of the Isle of Wight with nothing but new releases and a random selection of older, bargain DVDs in a few other supermarkets and high street shops.) I also went into the city centre, where I bought a book called The Fictional Man by Al Ewing. I had a book token left over from my birthday, and remembered being tempted by this novel the last time I'd been in that shop. Clearly it was meant to be!

After reading Ellie's rave review of Attachments, a madness seemed to come over me, sending me straight into town to search high and low for something by Rainbow Rowell, a name that I have seen all over the book blogs the past few months. I couldn't find Attachments, and Fangirl hasn't yet been published in the UK, but I came home with a copy of Eleanor and Park and a vague bewilderment about how I had come to buy it. It's the power of book blogging, people! Don't underestimate it.

On returning an almost-overdue Slaughterhouse 5 to the library, I saw Something Borrowed by Paul Magrs, sequel to the hilarious gothic-fiction-lover's dream, Never the Bride, which I read on my summer holiday earlier this year, and I simply had to borrow it, because you know you can never find a book in the library when you're after it specifically. (That, or you see ALL THE BOOKS you want to be reading RIGHT NOW. There is no in between.)

This week saw the publication of the new novel by Cecelia Ahern, an author I like to indulge in as Christmas approaches. For some reason, nearly all the chick-lit I can bear to read seems to be by Irish authors. Not that Ahern writes simply about shoes, sex and shopping; they are very feminine books but there is a magical twist and a breadth of subject matter that takes her writing out of her genre pigeonhole. The new book is called How To Fall In Love, but it is apparently more about falling in love with one's own life, rather than with another person (although I'm sure there'll be some of that, too.)

Finally, after seeing that both Ellie and Judi were reading Hyperbole and a Half, the book based on the popular blog by Allie Brosh, I found myself coming home with a copy of my own, even though Judi had offered to lend me hers. Once more, I had a vague sense of confusion. I hadn't actually set out to buy it, but, whoops, there it was, and money was changing hands, and I had another shiny new book to call my own. Hyperbole and a Half is half autobiographical anecdotes, half musings on life, covering issues such as motivation versus laziness, how to be an adult (or not), and the conflict between being a nice person on the outside and a real jerk inside, mixed in with comic stories about Brosh's dogs and childhood ("The God Of Cake" being my favourite) illustrated with childish but distinctive and expressive pictures. It also contains the frankest, most accurate description of depression I have yet discovered, heartbreaking and identifiable and yet still brilliantly funny. The book had me nodding in agreement all the way through. Check out the blog here.

Books I have read: 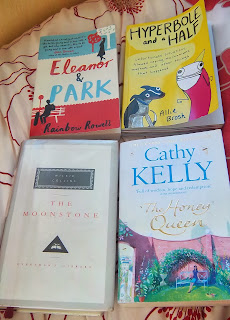 I finally finished reading The Honey Queen, (another example of Irish chick-lit) and thought it was fair; I enjoyed spending time with the characters within, although the unsympathetic ones were two-dimensional, but ultimately I felt the story was too gentle to really excite me. It was nice, but unremarkable, taking far more time than it ought.

I'm also enjoying the #readwilkie readalong of The Moonstone. I'm about a quarter of the way through now, still in the section narrated by the adorable, chivalrously condescending Gabriel Betteredge. Rachel, the daughter of the house, has been left a diamond with a lot of baggage by an estranged relative, but whether this jewel was intended as a gift or a curse is dubious, to say the least. Now, of course, the diamond has vanished, and a detective has been called in: the dour Sergeant Cuff, who though not credited as much by the narrator Betteredge, shows himself to be a shrewd observer. The newest servant, Roseanna, draws suspicion on herself, acting sneaky and mysterious, and with a criminal past, she is the obvious culprit - and therefore can be ruled out. Rachel herself is acting very suspicious about the whole affair, though the idea that any of the members of the family for whom he works could have any hand in the jewel's disappearance seems to be unthinkable to Betteredge. I also feel somewhat suspicious of Mr Franklin Blake, an old friend of the family, and the one who brought the jewel to the house in the first place. He seems charming enough, and there looks like there is a sort of love triangle between him, Rachel and Roseanna, but I don't quite trust him.
Posted by Katie Edwards at 15:14