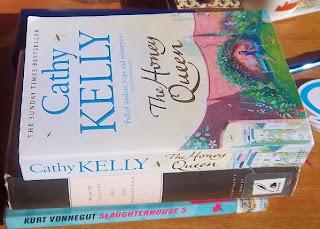 It's been a busy old week this week, and though I got off to a good start on Sunday and Monday by making a nest and ignoring the world in favour of books, blankets and biscuits, one week on I am only half-way through Cathy Kelly's latest book, The Honey Queen. I decided to read this one as a bit of fluff after the short but heavy-going Slaughterhouse 5. Slaughterhouse 5 was an interesting read, but one which I think I would actually enjoy more if I were studying it, reading and rereading and taking notes. Though quite simply written, there is so much beneath the surface about humanity, war, death and time, that I don't think you can really appreciate the full impact on a first read.

It's a funny thing, but I often find "light" reading to be harder work than more "literary" or bulky novels. Although I am enjoying The Honey Queen, which reads rather like a miniature soap opera, focusing on the lives of various inhabitants of a small Irish town, it seems to be taking a long time to read. I have read just over 200 pages in a week. Is it because there are a lot of characters to keep track of, or because it is a character-based rather than plot-driven narrative? Is it because my inner critic finds more to say about the writing style, or perhaps it's just not all that exciting? I don't know. It's certainly not badly written, although I do find that what Ms Kelly tells us about some of her main characters doesn't seem to tally with what she shows us. And it is a very warm, cosy community to lose myself in. But something about this book makes reading it a much more drawn-out process than logic dictates it should be.

November marked the beginning of NaNoWriMo (National novel-writing month) which I decided to participate in out of a feeling of desperation. All my life, my writing has been the thing that has most defined me, but lately I haven't written very much aside from this blog. I'm terrified that I've lost the knack or the drive or the ability, and so I'm using NaNoWriMo to re-teach myself the art of Making Things Up And Writing Them Down. I got off to a good start on Friday, but yesterday I went out for a family meal after work, and I only managed a couple of hundred words scribbled in a notebook on my lunch break. But I don't mind too much if I don't reach the target of fifty thousand words this year, as long as I keep going and create a story.

Also, on a whim, I signed up to Ellie's "Read Wilkie" readalong of The Moonstone, which I am enjoying very much, though I have not got very far into it. It's a nice, laid-back readalong, so one I should be able to fit in alongside NaNoWriMo and any other books I have on the go at any one time. This afternoon, I'm meeting an old school friend for coffee, then afterwards I'm going to see the sequel to Thor at the cinema.

Have a good week, everyone!
Posted by Katie Edwards at 13:32