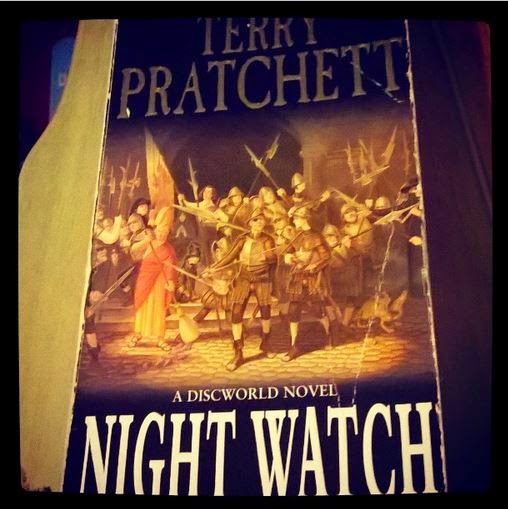 This isn't your past any more. Not exactly. It's a past. And up there is a future. It might be your future. But it might not be. You want to go home now, leaving Carcer here and the real John Keel dead? But there'll be no home to go to, if you could do that.

When Sam Vimes faces a vicious serial killer on the roof of the Unseen University, the last thing he expects is to find himself stranded thirty years earlier in his own past. It was a very different time, an explosion just waiting to happen. The ruler was out of touch with the common people and reality, the Watch were corrupt, and the masses had just about had enough. Vimes just wants to go back to his own time, when his wife is having their first child, but there is a problem. Vimes brought the evil Carcer back with him, who is running amok in Ankh-Morpork and mingling with powerful villains, quite happy to cause as much disruption to history as he possibly can. And John Keel, the man who taught Vimes everything he knew, is now dead. Now it is up to Vimes to mentor his younger self and single-handedly turn the City Watch around. But revolution is brewing...

Night Watch is, without doubt, my favourite of the thirty-plus Discworld books I've read. In fact, I would go so far as to say that it is objectively the best book in the series! It is best to read the other "Watch" books first, however: Guards! Guards!, Men at Arms, Feet of Clay at a minimum, with The Fifth Elephant and Jingo as optional extras. That way, you get to see how far Samuel Vimes and the Ankh-Morpork City Watch (or police force) have come since the start. When we first met the Watch in Guards! Guards! it comprised only three men, and its Captain was a drunk in a gutter. (Not, as my sister so rightly pointed out, an alcoholic - he wasn't rich enough for that. A drunk.) Over the course of several books, Terry Pratchett built up the characters, improved the Watch, promoted Vimes several times and saw him happily married to the richest woman in the city. Pratchett shows us just how much Vimes's life has improved, just how good he's got it - and then snatches all that away. We see how bad Ankh-Morpork has been by comparing it with the city we've come to know, which may be a mouldering cesspit crawling with villainy, but it is a mouldering cesspit that works, crawling with well-regulated villainy. That may not sound like a glowing recommendation, and yet it shines a light into the dark places of the city in years gone by.

But the real conflict of Night Watch is that which comes from within. It is up to Vimes, in the role of his mentor John Keel to not only sort out the corruption and brutality of the Watch and protect the populace during a time of severe unrest, but also to make sure that his younger self will stay on the right path (while knowing that it's a path that will lead to a lot of pain along the way.) And he does so magnificently. As "John Keel," Vimes strides in and takes over with sarcasm, audacity and an unconventional but very firm moral compass. I think it is fair to say that Sam Vimes becomes the closest thing that the Discworld has to a hero.

This series began life as a comic parody of the fantasy genre, but by Night Watch it barely feels like fantasy at all. This is literature, albeit literature containing time travel, trolls, werewolves and zombies, all taking place on a flat world held up by four elephants on the back of an enormous turtle called The Great A'Tuin. All this is secondary. I wouldn't even call Night Watch a comedy. There is humour throughout, but instead of silly gags there is a more piercing wit that is all the more satisfying for being paired with darker themes. And the social commentary is just as relevant today, if not more so than when it was published in 2002. Just think of the political situation in the UK with a government out of touch with the people it claims to speak for, or in America with all the reports we hear of racism, corruption and brutality ingrained in the police force. Night Watch can be held up against Charles Dickens or Victor Hugo in its fierce morality, as well as being a jolly good story. This is Sir Terry Pratchett at his finest.