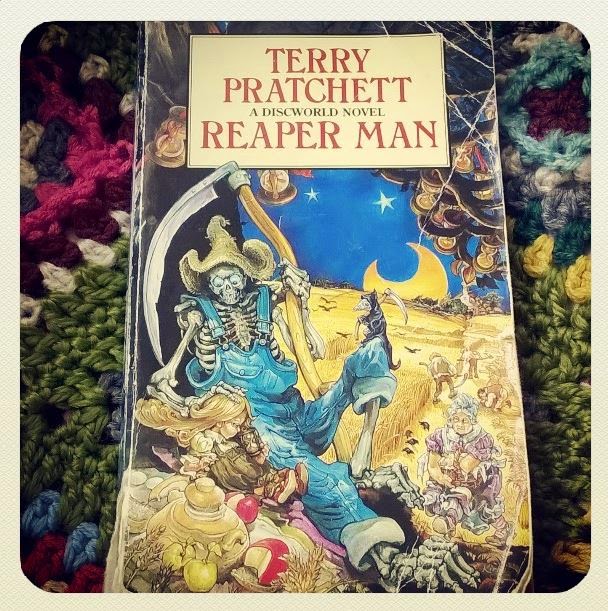 "I remember," said one of the oldest mayflies, "when all this was fields, as far as you could see."

Reaper Man was one of the very first Discworld books I read, when I was thirteen or fourteen, and although I've reread all of the others in the "Death" mini-series several times, somehow Reaper Man has been missed out on these rereads. So returning to this book this week, I was amazed by how good it really is. There is, of course, the humour one comes to expect from Terry Pratchett, but also a lot of pathos and philosophising (but not in such a way that you feel beaten around the head with it.

The book opens with a broad view of the universe, before focusing in on the Discworld, lyrical observations on life, death and nostalgia as seen by mayflies and ancient pine trees, before focusing in on the human characters who will feature in the novel. It is a thoughtful, lyrical opening, showing the parallels in all life, no matter its length. I'm reminded of another personification of Death, from Pratchett's friend Neil Gaiman, who says, "You get what everybody gets - you get a lifetime."

JUST BECAUSE SOMETHING IS A METAPHOR DOESN'T MEAN IT CAN'T BE REAL.

Reading Reaper Man in the context of its author's death is a strange experience, poignant but also comforting. Pratchett portrays death as part of the natural cycle of the world, using impossible fantastical situations to try to make sense of the real world. As a child, death seemed quite straightforward: you live and then you die. But as I've grown older, I find it more difficult to get my head around.

In Reaper Man, Death loses his job, and chaos takes over. The dead find they're not going anywhere, and learn all about undead. Death himself gets a job on a farm, and starts to learn a little bit about life, about how precious time is when it is limited. And the wizards of the Unseen University find themselves faced with strange poltergeist activity, souvenir snowglobes and shopping trolleys.

LORD, WHAT CAN THE HARVEST HOPE FOR, IF NOT FOR THE CARE OF THE REAPER MAN?

Death, the Reaper of the Discworld, is one of the series' most lovable characters, despite his gloomy profession. Although he doesn't always quite understand his human charges or the way they do things, he cares about them and is a warm, safe (?) presence despite his appearance and job description. And he likes cats, and has a horse named Binky. When he is reinstated at the end of Reaper Man, the effort he puts into paying a very special visit is both heartbreaking and beautiful. This is the book to read this week. Given its subject matter, yes, it may be a painful read, but it is a pure sort of pain, which is also comforting and soul-refreshing. Reaper Man has easily shot into my list of favourite Discworld books. I'm sorry that it took so long to rediscover, but I'm very glad I found it when I did. It was the right book at the right time.