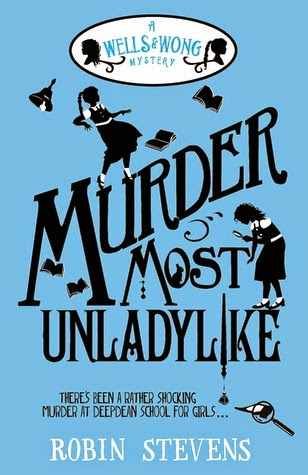 There's been a rather shocking murder at Deapdean School for Girls. Unfortunately, there is no proof; between Hazel Wong stumbling upon a dead science mistress in the gymnasium and going for help, the body has vanished, leaving no evidence that Miss Bell has done anything other than resigned her post and moved away. But Hazel knows what she saw. It is up to her and her friend Daisy Wells, the founding members of the third-form Wells and Wong Detective Society to uncover the truth!

Set in a 1930s girls' boarding school, Murder Most Unladylike is reminiscent of the school stories that made up a lot of children's literature of the 20th century - Malory Towers, the Chalet School, Angela Brazil - mixed up together with the Famous Five or Nancy Drew. Robin Stevens recreates the golden age of children's books wonderfully, with dormitory pranks and midnight feasts, gym tunics and bun breaks, with a mystery to be solved without getting the police involved. But within this old-timey children's story are subjects that wouldn't have been written about in 1934, not for children - the racism Hazel, who is from Hong Kong, faces, two of the schoolmistresses having been in a relationship, and an illegitimate child showing up from someone else's past. Plus murder, of course - I don't think anyone ever actually died in Enid Blyton's writing. A dog might have got ill from eating poisoned food once or twice, but that's about the extent of it.

Daisy and Hazel join a long line of classic detective duos: Like Sherlock Holmes, Daisy is the intrepid detective whose excitement for a case sometimes overlooks human compassion. Hazel is more cautious, and the chronicler of their adventures - Daisy even calls her "Watson" from time to time. The story is a lot of fun, if verging on the ridiculous sometimes as this small private school has an unusually high body count! 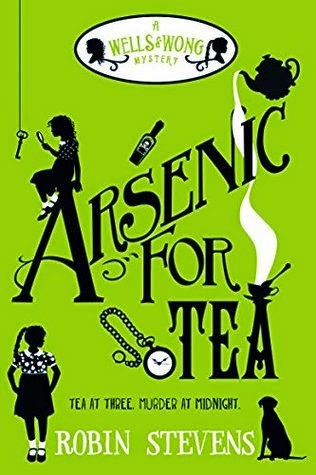 The sequel, Arsenic for Tea, takes place away from Deepdean. You can't have too many murder mysteries at one school; it would be closed down! Hazel goes to stay with Daisy at her huge, if slightly faded, English country house. Daisy's birthday falls during this holiday, and her mother throws a big tea party, but as well as the family and school friends, the house has some mysterious and sinister guests. The atmosphere is terrible, filled with unspoken secrets and deceit. And then, one of the guests falls horribly ill and dies. The evidence points to poison. But who might bear such ill-will towards this guest? Perhaps it would be easier to ask who doesn't. Wells and Wong launch another investigation, but Daisy finds it is not so easy to get swept up in the spirit of adventure when her own family members are implicated in murder.

Arsenic for Tea is another instant classic of children's literature, perhaps even better than Murder Most Unladylike. It is Agatha Christie for children: a well-plotted, twisty mystery with plenty of red herrings, a limited cast of suspects, but everyone keeping secrets, even if none of them are the secrets they are suspected of hiding. But Stevens plays fair, and hides the clues within the text, if you only know what you're looking for. I actually picked my suspect quite early on and stored up the evidence against them even while they were seemingly eliminated from the list. I felt very proud of myself when I was proven right - not because the author was sloppy but because I was paying attention. An excellent, very satisfying pair of mysteries, and I hope to see a lot more of Daisy Wells and Hazel Wong.
Posted by Katie Edwards at 16:33